Yes, the weather outside is frightful but, if you’re prepared to brave the frigid winter temperatures, a December visit to New York can be quite delightful. The tourist crowds are mostly absent, snow decorates Central Park, windows of department stores are crammed with toys and draped in tinsel, and seasonal attractions will have you feeling merry and bright. 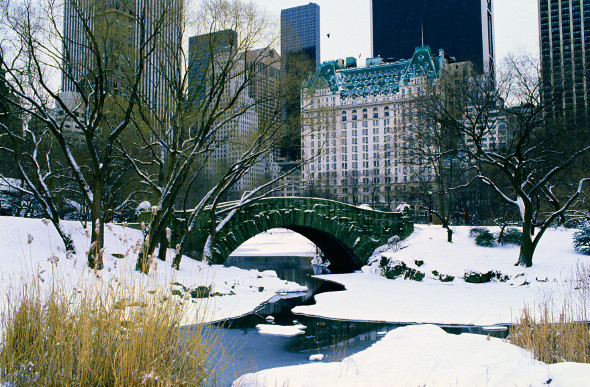 If you enjoy music, you couldn’t be in New York at a better time. The Lincoln Centre is in full swing in winter; take in the annual The Nutcracker Suite, performed by the New York City Ballet under a giant on-set Christmas tree.

The Lincoln Centre also hosts a traditional Messiah sing-along if you want to get into the Christmas spirit. Some 20 other venues around the city offer Messiah concerts. Every hotel concierge has a different opinion on which is the best, but high on the list is the Trinity Church version accompanied by a baroque orchestra using period instruments.

Paramount Theatre’s musical version of A Christmas Carol is another seasonal New York institution, and Radio City Music Hall at the Rockefeller Centre is home to the most spectacular Christmas show in the city, which runs throughout November and December and features the famous Santa-suited dancing girls, the Rockettes.

If you want your music for free, head to South Street Seaport on Friday evenings, or Saturday and Sunday afternoons, for carol singing with the St Cecilia Chorus.

In Grand Central Terminal – the much-filmed station worth seeing at any time of year – spectacular laser shows on the ceiling of the main concourse are choreographed to seasonal music. The station also hosts a six-week Holiday Fair. The ice rink at the Rockefeller Centre, overlooked by the golden statue of Prometheus (Image: New York Convention and Visitors Bureau)

One of the disadvantages of a winter visit to New York is that the days are very short. On the plus side, that brings a particular Christmas atmosphere that you don’t get in Australia, as decorative lighting brightens the city with spectacular displays.

Bronx Zoo lures you into the cold with giant snowflakes, illuminated animal sculptures and trees loaded with fairy lights. Not to be outdone, the Botanical Gardens break out in an extravagant display of toy trains and lights reflected in the glass panels of the garden’s great Victorian glasshouse like a scene from Dickens.

Many of downtown Manhattan’s streets are also illuminated, with the trees along Park Avenue perhaps providing the loveliest example. On the corner of Fifth Avenue and 59th Street, the world’s largest menorah (Jewish lampstand) is a reminder that Hanukkah provides additional good cheer in December. 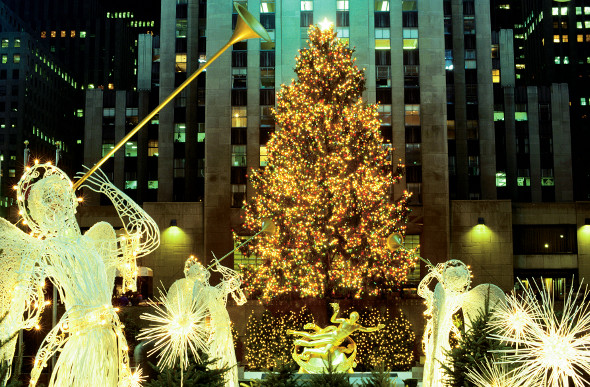 Christmas street lighting competes with department-store windows for attention. Lord & Taylor boasts the best: thousands line up for the official unveiling in early November in order to be first to see the extravagant mechanized scenes. The high-fashion elegance of Bergdorf Goodman and the LED-lit facade of Saks Fifth Avenue are also terrific.

If you have kids, take them to legendary toy store FAO Schwarz and Bloomingdales for the window displays alone. Macy’s takes a brasher approach, with bright fairy lights a-twinkle on the store front. Inside, assistants are dressed as elves and Santaland shouldn’t be missed by anyone with kids.

Head to the city’s delicatessens too, which are bursting with seasonal goodies. Zabar’s gourmet grocery on Broadway has an amazing array of plum puddings, seasoned turkeys and candied fruit, while Balducci’s on Sixth Avenue features Italian seasonal foods such as panettone, succulent pork ribs and Neapolitan honey pastries. 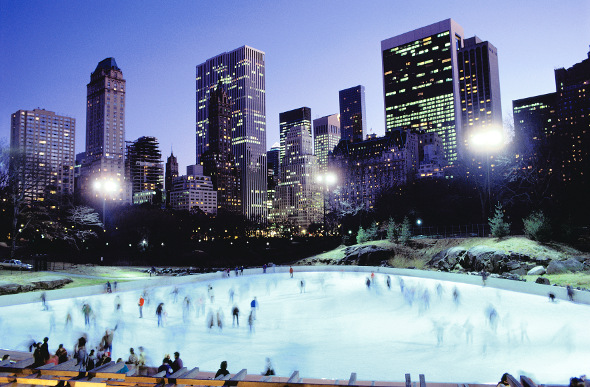 Feeling active? The Rockefeller Centre has a celebrated outdoor ice rink overlooked by angels blowing silver trumpets and a gargantuan Christmas tree strung with 30,000 lights. You can also skate at Bryant Park, which is further enlivened by a Winter Village of some 130-odd booths selling all kinds of gifts and goodies.

If street snow turns to slush, head to Central Park, which remains white for longer. There are two skating rinks, and some locals take off across the park on cross-country skis if the snowfall has been especially good. Even walking here is wonderful. Columbus Circle at the park’s southwest corner hosts a Holiday Market where stalls sell crafts and snacks.

When Jack Frost starts nipping at your toes, retire to the Metropolitan Museum of Art, which has a lovely Christmas tree, ceremoniously lit every Friday and Saturday evening at 7pm, decorated with Italian angels and cherubs and surrounded by a baroque nativity scene.

The tree at the American Museum of Natural History is also worth seeing, decorated each year with brightly-coloured origami decorations that represent animals and other museum objects.