As I float down the indigo-blue river that snakes its way through verdant, wild rainforest, I’m certain I’ve found the most serene place on earth. The pure silence, save for the colourful, singsong birds that flitter between the leaves, is utterly intoxicating.

I’m balanced atop a single piece of wood that teeters on the outer edges of a narrow dug-out canoe. My guide is seated behind me expertly navigating the serpentine Riri Riri River en route to Riri Riri Blue Hole.

I’m in the tropical South Pacific haven of Espiritu Santo, Vanuatu. This is an island where nature unapologetically rules, and I’m smitten. 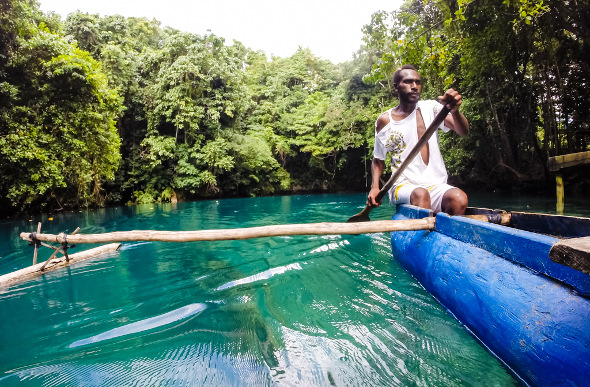 Espiritu Santo, or 'Santo' for short, is the largest in Vanuatu’s archipelago of 83 islands. Santo is legendary among wreck divers the world over for the easily accessible WWII relics that lay hidden in the depths just offshore, most famously SS President Coolidge.

The island’s other lure is Champagne Beach, which has repeatedly been named as one of the world’s most beautiful beaches.

I won’t lie, Champagne Beach is one of the main reasons I’m here now, floating down this impossibly beautiful river towards one of the island’s other treasures: blue holes. 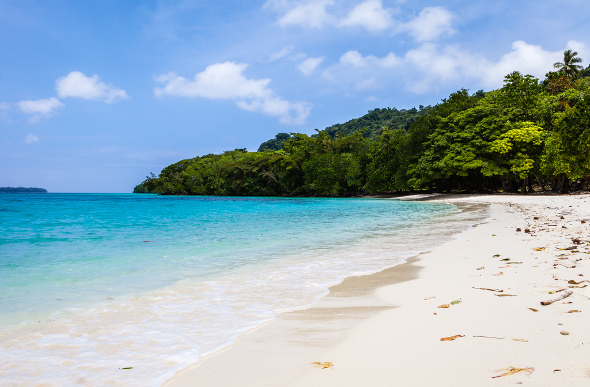 Fifteen minutes of blissful canoe-ambling down Riri Riri River reveals the dazzling sapphire-blue Riri Riri Blue Hole. The scene before me is like something out of Avatar, and there’s not a soul in sight.

Riri Riri Blue Hole is a freshwater pool that drops some 10 metres into a limestone cavern below. Water filters through the multi-layered limestone at its depths, resulting in the intense indigo that has made the holes are famous.

I’m delivered to a purpose-built platform at the water’s edge where I clamber up to a permanently-attached rope swing. After slight hesitation I jump, hurtling across the water’s surface.

At the swing’s apex I let go and plunge into the icy water, catching my breath from the cold. Surfacing amidst all this natural beauty I’m certain I’ve found my happy place. 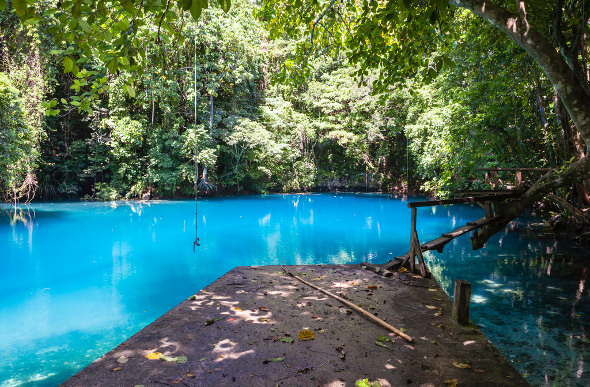 Taking The Wheel On A Vanuatu Jungle Safari

The next day I travel north through endless fields of coconut palms, cattle grazing amongst them, towards Oyster Island. I hitch a ride over to the island via their ferry by banging on the ingenious ‘bell’, which is actually an old rusty scuba tank.

Brad, the chilled-out resort manager, is taking me snorkelling at an outer island where he’s promised I’ll be blown away by the hundred-year-old coral plates and abundant fish.

Once I’m below the surface at Turtle Island, I get it. This place is special. Vibrant coral decorates the sea floor in a sea of blues, purples, and greens. 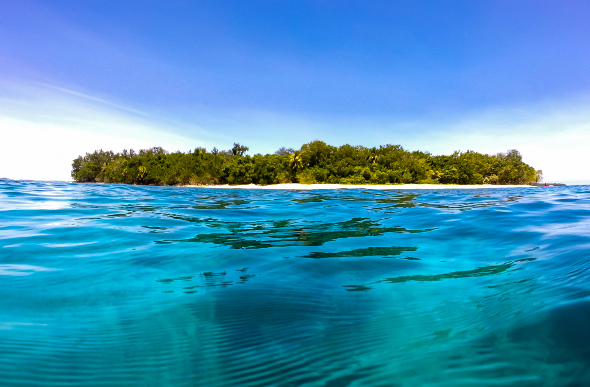 The promised hundred-year-old coral plates fan out for metres, sitting pretty as they have for hundreds of years. Tropical fish dart between the hard and soft corals as though it’s an underwater highway. It’s an underwater utopia and I could gaze for hours.

I’d heard rumours of pristine, tourist-free beaches on the island’s north, but like most wayward travellers I dismissed them as pure fables. How wrong I was. 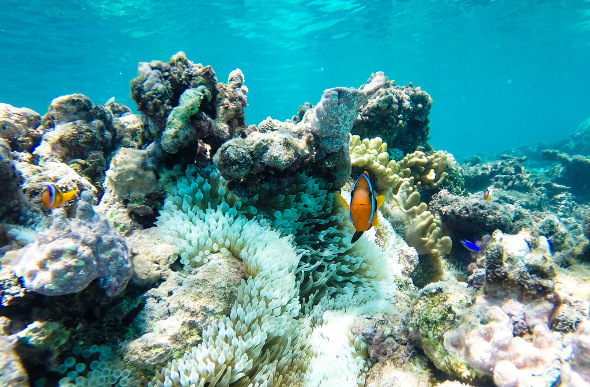 Say hello to the clown fish living under the surface (Image: Sarah Vercoe)

After negotiating my way through a rogue group of cattle who’d inadvertently decided the dirt road into Champagne Beach was the perfect place for an afternoon doze, I was greeted by an empty stretch of shimmering white sand and beyond-blue water. Further up the road, Port Olry beach is much the same, save for a few locals.

I spend my last days on the island basking in the sunshine with powdery sand between my toes, intermittently dipping in the cerulean waters.

Visit your local Flight Centre store or call 131 600 for more advice and the latest deals on travelling to Vanuatu.

Sarah Vercoe is a freelance writer and award-winning photographer specialising in travel. A self-confessed travel addict, Sarah has captured the beauty of our world in more than 30 countries on five continents (and counting).
more articles from this author