Where To Get Your Zombie On For Halloween And Beyond

Where To Get Your Zombie On For Halloween And Beyond

The Zombie Apocalypse is coming! From fundraisers to fun runs; races to escape rooms; theme parks to themed cruises, here’s where in the world to get your zombie on for Halloween and beyond. But make sure to keep your brains about you when you live your zombie fantasy.

Zombie walks, where people dress up as zombies and amble through city streets, parks and public spaces, have been around since the early 2000s, and have mutated into fundraisers, pub crawls and even conventions. They are believed to have spread throughout the world, after starting out in North America, where they have become especially rampant in Canada. Last year’s Toronto Zombie Walk attracting 15,000 ‘deadlings’.

A photo posted by brisbane zombie walk (@brisbanezombiewalk) on

Closer to home, Australian zombie walks are alive and kicking, with the Brisbane Zombie Walk celebrating its 10th anniversary on November 1, including a walk, markets and movies at Roma Street Parkland. Get zombified by professional make-up artists or bloodied in the splatter tent. Admission costs from $15 and proceeds go to the Brain Foundation. The Sydney and Canberra zombie walks are on October 31; and the Melbourne Zombie Shuffle is on November 8.

You don’t need to wait for Halloween for some undead action. Escape the zombie hordes – and get fit – every day with a zombie running app. Zombies, Run! puts you at the centre of your own zombie drama. Using audio of zombies breathing down your neck, as well as songs from your own playlist, you are guided to collect supplies to expand your base back home. There are more than 200 missions, so you’ll never be bored.

Scaring up a good time: Halloween Spookiness In The USA

London’s Zombie Evacuation Race is held at Allianz Park stadium on October 31 this year. You can choose to escape the living dead, running five kilometres to evade infection, or gorge yourself on the living, as one of the zombie classes. If you’re bitten (hypothetically) three times, you become one of the undead. At the end of the race, survivors and infected alike receive medals, but zombies are said to be taken away to be ‘terminated’. Tickets are upwards of $A60, but there are cash prizes to be won.

Escape rooms have embraced the zombie ethic around the world, featuring zombie plots for hapless tourists attempting to, well, escape. US-based Room Escape Adventures has devised a fiendish plot where you are trapped in a room with up to 11 others, with one zombie chained to the wall. You have 60 minutes to uncover the clues, while every five minutes a buzzer sounds and the zombie’s chain is lengthened 30 centimetres. The game is on offer in several US states, as well as London, Madrid and Toronto.

The Walker Stalker cruise on the Norwegian Pearl sails from Miami in Florida to Nassau in the Bahamas in January next year, providing three days of fandom for The Walking Dead aficionados. The cruise features Q&As and panels with stars of the popular TV show (Norman Reedus, Emily Kinney and more), as well as the creative minds behind the comic book series, plus a zombie makeup experience.

The fun-in-the-sun Caribbean cruise might seem a little incongruous for creatures of the night, but hey, zombies have to have holidays, too. The ship is already full but you can join the waiting list. 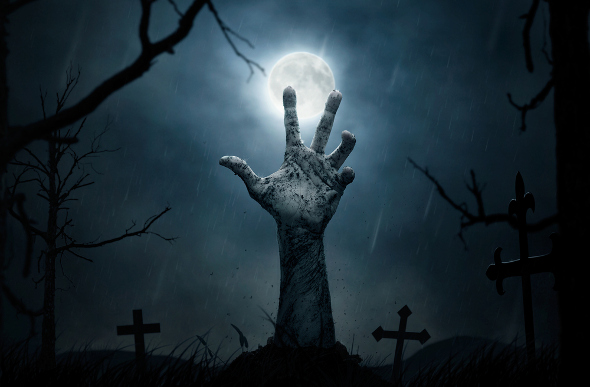 Variations On A Theme

Theme parks know their way around a Zombie Apocalypse. Check out Movie World on Queensland’s Gold Coast for its Fright Nights on Friday and Saturday nights in October. New this year is the Zombieland precinct, based on the cult film. Here you can make your way around recreated set pieces from the film, as the zombies roam.

Or visit Universal Studios Japan for its Universal Surprise Halloween, running until November 8. There are nine horror attractions, including street zombies on the attack and a Resident Evil attraction. Oh, and keep your eyes peeled for an unholy marriage of Miffy and Chuckie as part of the ghoulish fun.