Gladiators: What The Movies Don’t Tell You

Gladiators: What The Movies Don’t Tell You

Discover the truth about who the gladiators were, where they lived and how they trained in Gladiators: Heroes of the Colosseum, the new Australian-exclusive exhibit at the Queensland Museum in Brisbane. Showcasing more than 110 artefacts unearthed from the amphitheatres of Rome and Pompeii, this fascinating exhibition takes visitors back to a time when gladiators were the greatest entertainers in the world.

Unless you’re a student of ancient history, what you understand about Roman gladiators most likely comes from popular culture. Nothing wrong with that – popular culture has delivered some epic Roman entertainment of late. There is, however, a lot more to the world of gladiators than meets the eye. Far from being senseless slaughter for the crowds, gladiatorial combat demonstrated to Roman people how death should be met: courageously, fiercely and with stoic endurance of fear and pain. Gladiators: Heroes of the Colosseum brings together artefacts from seven Italian museums and institutions to shine a little more light on the lives of theses near-mythical men (and women, if that 2nd century AD relief from Halicarnassus is anything to go by). 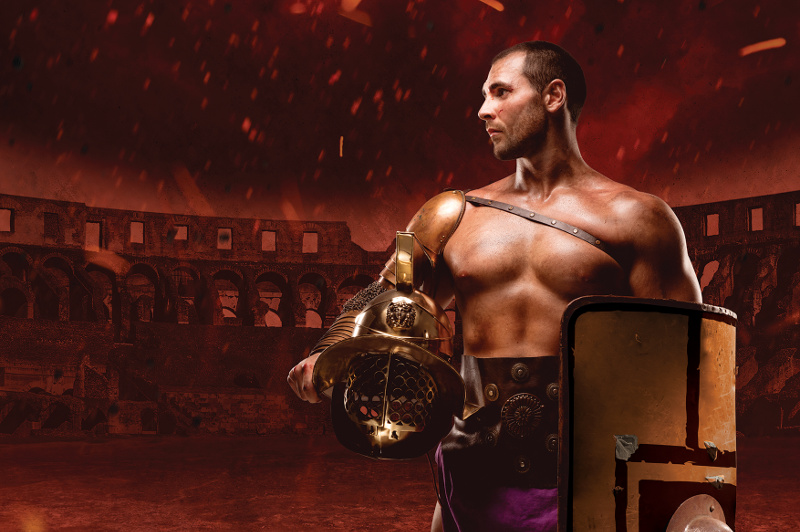 Nothing drops you into the world of the gladiator like an authentic bronze helmet of a Thraex. Even housed in its glass cabinet, this creation from between 50 and 79 AD is fearsome in the extreme. A Thraex was a gladiator armed in the Thracian style, and the helmet on display shows an awe-inspiring level of detail. On the front is a gorgon’s head, possibly a medusa, on both sides of the helmet are dolphins, while the crest of the helmet ends in a griffin’s head, to which feathers could be attached. Then, there are the bronze greaves, or shin guards, from the 1st century AD. These were uncovered at the Gladiator School in Pompeii and are, again, elaborate works of art.

While gladiators did fight to the death, this wasn’t always the case. They were there to entertain and as such, were expensive investments. If gladiators were injured in training or during contests, they were given the best medical treatment. They were also fed a muscle-enhancing diet. Gladiators: Heroes of the Colosseum reveals what life may have been like for the many thousands of gladiators who fought throughout the Roman Empire.

“We are proud to bring this exhibition to Brisbane and give our visitors the opportunity to delve into Roman history and learn how the gladiators lived and the struggles they endured,” said Queensland Museum CEO and Director Professor Suzanne Miller.

A Walk Through Ancient Life

The exhibition will give visitors a taste of life in Ancient Rome by exploring four themes: Origin and development of gladiatorial games; Gladiators; The Colosseum and the amphitheatre of the Roman Empire; and One day in the Arena. Keep your eyes open for what could just be the oldest bread in the world – in the final room of the exhibit you’ll see bread from Pompeii which, according to modern reckoning, was baked on 22 August, 79 AD.

For a more moody walk through the ancient world of gladiators, visitors can attend any of the 18+ GLADIATOR AFTER DARK events and take the opportunity to the entire museum - including the Gladiators exhibition - after dark. Other programs also run throughout the night, including Gladiatorial re-enactments, pasta making, talks and demos about Ancient Rome, and live music. There’s also a good chance of bumping into a buff Gladiator or two. Food and drinks are available for purchase.

Gladiators: Heroes of the Colosseum will run from 23 June 2017 to 28 January 2018 at the Queensland Museum.

Visit your local Flight Centre store or call 131 600 for more advice and the latest deals on travelling to Brisbane.