Inside Japan's Valley Of Hell

Inside Japan's Valley Of Hell

Japan’s northernmost island of Hokkaido is known for a few things: beer in Sapporo, skiing in Niseko, ubiquitous uni (sea urchin) and beef.

Lesser-known is the isle’s sulphurous, belching and bubbling Jigoku-Dani, or 'Valley of Hell', a 9.7-hectare geothermal crater that formed from the eruption of Mt Kuttara some 20,000 years ago.

Located within Hokkaido’s Shikotsu-Toya National Park, where roiling lava pits and simmering black sulphur calderas quietly lurk under a thick blanket of snow, it certainly might sound like a vision of Hell to some. 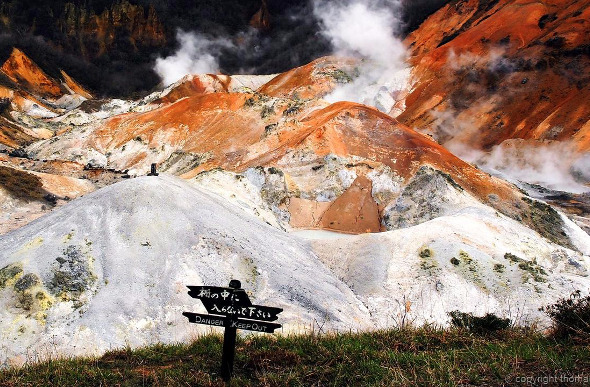 Valley of Hell - but heaven to many (images: Getty)

But Jigoku-Dani, 112 kilometres south of Sapporo, is also many people’s idea of heaven. It’s home to dozens of onsen (natural hot water baths) that range from simple steamy streams in which travellers can dip their cold toes to modern hot basalt baths where you can meditate over snow falling on bonsai trees.

Not to be confused with the more famous Jigokudani on Japan’s main island of Honshu, where snow monkeys bathe, Hokkaido’s Jigoku-Dani is another flavour altogether.

And they’re especially prized for their variety. Nine different types of thermal water can be found in Jigoku-Dani’s onsen town of Noboribetsu, including acidic iron, alkaline, salt, radium and melanterite springs. Some are even prescribed by balneologists to heal various medical conditions including bronchitis, neuralgia and eczema. 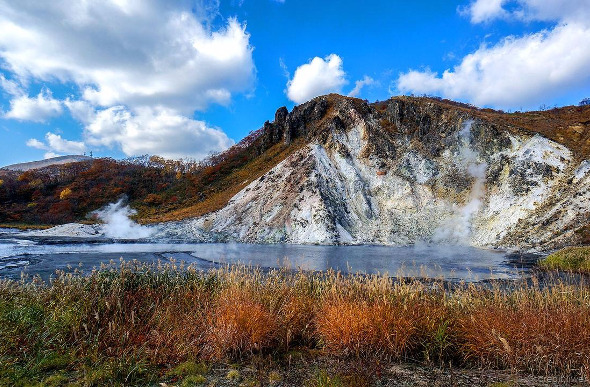 The hot springs of Noboribetsu

There's more than hot baths in Hokkaido. Satisfy Your Powder Cravings In Niseko

The snow crabs are legendary. Snow Crabs And Hot Springs In Kinosaki, Japan

I visited Jigoku-Dani in the dead of February, after a few days of skiing in Niseko, 90 kilometres to the northwest. Noboribetsu made for a sensible base, both because of its proximity to the park’s blistering blowholes – and because I was very much in need of a post-ski soak.

But the first thing I saw when entering Noboribetsu was an 18 metre-tall red roadside demon (yukijin), lording over the approach road with an angry look on his face. He was fanged and horned and pointed a spiked club at oncoming drivers.

Meant to be a welcome demon, locals believe that yukijin protect the hot springs, ward off evil spirits and pray for the good fortune of humans.

Every June, men dress as yukijin, launch fireworks into the air and dance to bass-heavy Japanese taiko (drums) as part of Noboribetsu’s Demon Fireworks festival.

There are nine different demon statues scattered across the town, most of which are newly made tourist attractions. But the yukijin at the town’s Enma Do Shinto Shrine, found in an altar atop a set of tree-shrouded steps, can be traced back to the Edo period (1603-1868). 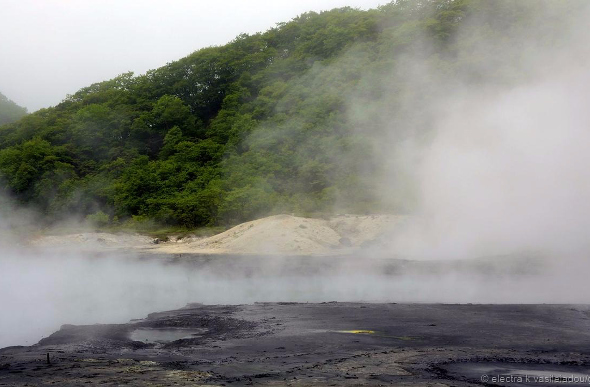 According to Shinto belief, Enma – the King of Hell – stands at hell’s entrance and decides which of the six paths a dead person will take. Some go right to hell or are reborn into the world of war, while others are reincarnated as animals or go straight to heaven.

The region’s tendency towards darkness is fitting, considering the island’s history.

Although Hokkaido was settled by indigenous Ainu people around 18,000 BC, during the Upper Palaeolithic age, the island wasn’t developed by the Japanese government until the late 19th Century, in an effort to prevent the Russians from expanding beyond Vladivostok, just 725 kilometres away across the Sea of Japan.

Noboribetsu’s plethora of hot springs were used as a healing centre for wounded soldiers in the Russo-Japanese War of 1904-05, and as a result, the town’s architecture retains a dark Brutalist feel, with many cold concrete hospital towers converted into onsen resorts.

My hotel, the Park Hotel Miyabitei, was such a property. Like many accommodations in town, it catered to the Chinese bus package tours that descend en masse on Noboribetsu each winter.

It also sported a whimsical 1970s vibe that is hard to come by in today’s over-renovated megaresorts.

Elevator doors were painted with stylised clouds and rainbows; walls were hung with graphic bird art; and the buffet was piled with heaping bowls of snow crab legs and salmon sashimi. 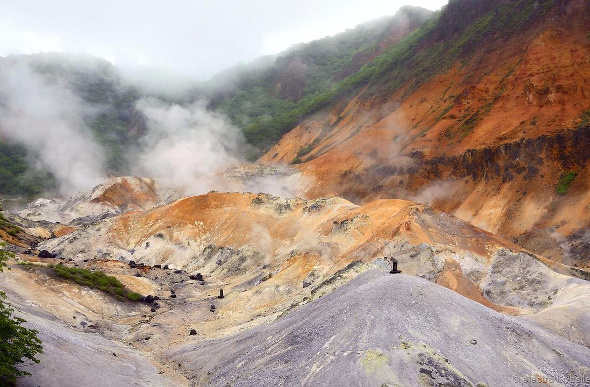 The region is riddled with volcanic activity

There was even a soft serve ice cream station. Even if this was package tourist hell, it had some delightful perks.

More important, its onsen was well maintained and a quiet spot to soak before dinner. Extensive pre-showering is mandatory and strictly enforced, as is nudity while in the bath.

So I washed up in the large pre-bathing shower room before gingerly walking to the six soaking baths: five indoor and one outside.

Like all onsen, bath admission is included in the price of the hotel stay, and men and women’s onsen are completely separate. The natural water itself was highly sulphurous and quite whiffy, but after a 20-minute soak my skin was ultra-soft.

When Tired Of Soaking, Take A Walk

After a few days, Noboribetsu’s bus crowds started to wear on me so I escaped to the remote and elegant Horo Horo Sanso hotel in the village of Date, about 40 kilometres north of Noboribetsu.

The drive there passed through a mountainous world of snow and steam where conical mountains and far-off summits seeped spirals of smoke like urban chimneys.

The hotel’s tatami mat rooms were cosy and traditional, and its dazzling modern onsen had dozens of stylishly designed indoor baths, with windows overlooking the snow-covered bamboo and bonsai trees outside. 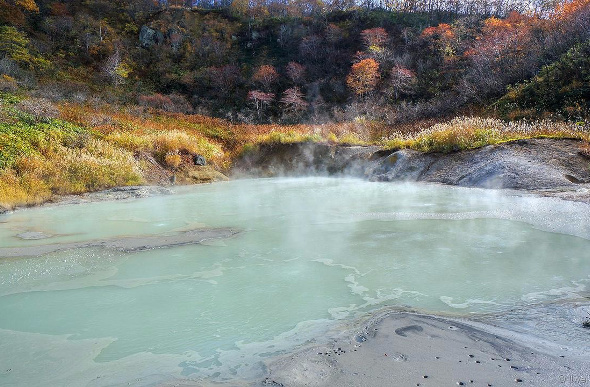 I headed to one of the outdoor basalt stone baths; a gentle snow fell on my head while I lingered in the thermal water as long as I could.

After my skin turned suitably pink, I slipped into my cotton yukata (robe) for dinner at the hotel’s restaurant. The buffet was piled high with excellent tuna sashimi; rich, marbled Hokkaido beef; and simmering DIY nabe (hot pots).

If you get bored of soaking, the other main activity in Noboribetsu is walking the 8 kilometre network of boardwalks and trails that meander around the various hot vents, thermal lakes, hot water marshes, geysers, blowholes and steam caves that pierce and singe Jigoku-Dani valley.

The main pathway offers spectacular views of the scorched and rust-stained hills and distant snow-capped-mountains, with lookouts over Mount Kuttara.

Other trails lead past the active volcano of Mount Hiyori, the gourd-shaped Lake Oyunuma, the cauldron-like pond gushing out noxious 85C black sulphur water, Oko no Yu, and the boiling geyser centrepiece of the scenic walkway, Tessen Ike.

I ventured down a quiet auxiliary trail that ran alongside the steamy 45C Oyunumagawa Stream, where an easy 15-minute walk brought me to the Oyunumagawa Natural Foot Bath, a natural segment of the stream slightly cooled by snow and air. 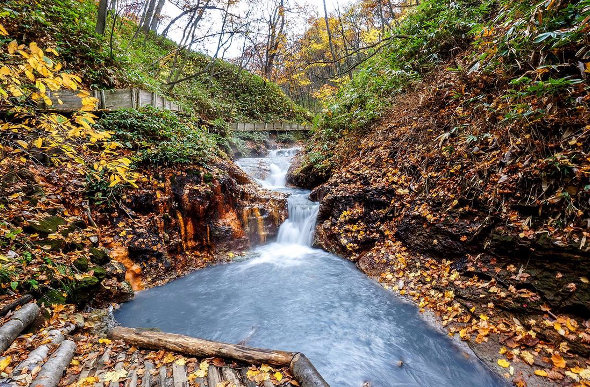 Here, I sat on a ramshackle log bridge and dangled my feet in the hot sparkling water below while gazing out over a hushed and sun-dappled sliver of bamboo forest.

You could walk directly in the stream as I did, though the hot squishy mud at the bottom of the river is not for the faint of heart. But even without that, sitting on the streamside rocks in a small patch of February sunshine, I’d found a little slice of heaven in the heart of Hell Valley.

Visit your local Flight Centre store or call 131 600 for more advice and the latest deals on travelling to Hokkaido.

This article was written by Adam H Graham from BBC and was legally licensed through the NewsCred publisher network.