It's Always Sunny In San Francisco

It's Always Sunny In San Francisco

Forget what you’ve heard about the notorious F.O.G. – there’s a spot in San Francisco that is always full of light, love… and glitter? Welcome to the world of Sunshine “Sunny” Powers. And yes, that’s her real name. 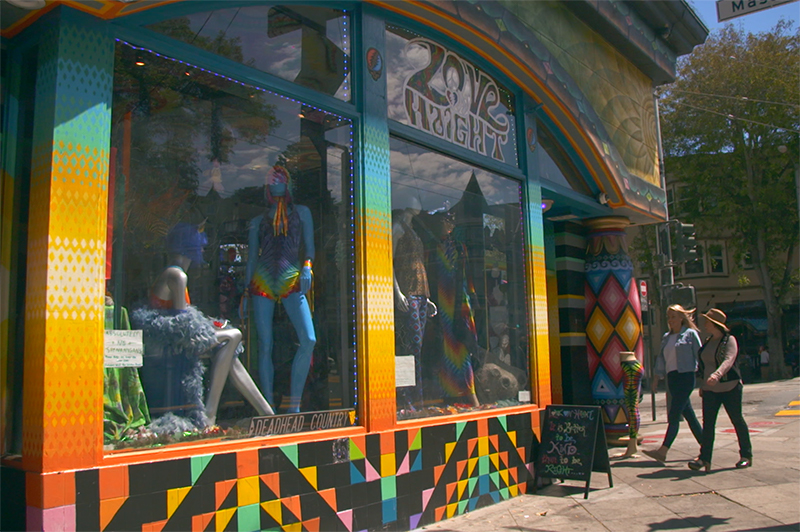 The striking exterior of Love on Haight.

Bestowed her distinctive moniker back in 1998 at Wavy Gravy’s Hog Farm in California (considered the longest-running hippie commune in the US), Sunshine Powers has been Sunny ever since.

“Sometimes I feel a burden in the name, like, it is something I have to live up to,” she says. “But mostly it inspires me to be a light, to inspire, to sparkle. To keep going and shining through the fog,” she says. 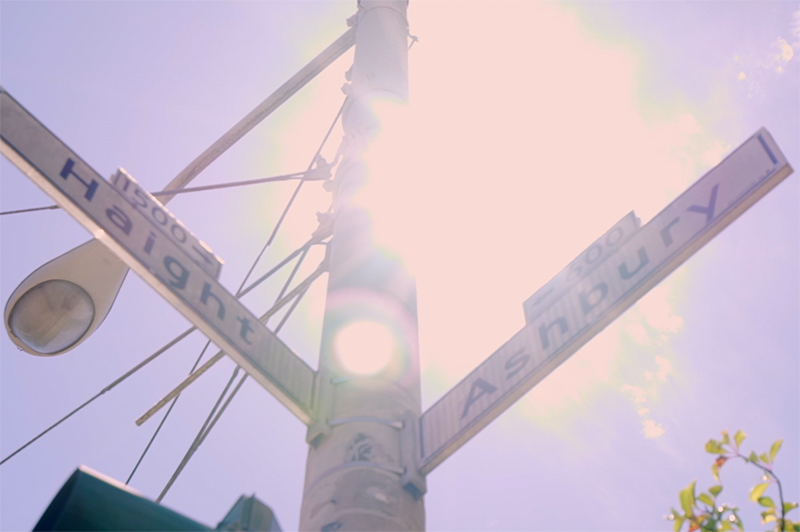 The crossroads of Haight and Ashbury were the epicentre of the hippie movement 50 years ago.

Ah, the fog. San Francisco is as famous for its weather as it is for being the birthplace of the hippie movement. It’s apt as this year is the 50th anniversary of the Summer of Love, the social phenomenon of the spring and summer of 1967 where around 100,000 young artists, outliers and activists came to San Francisco to change the world. Their lasting legacy was the hippie movement, and Haight-Ashbury was its epicentre. 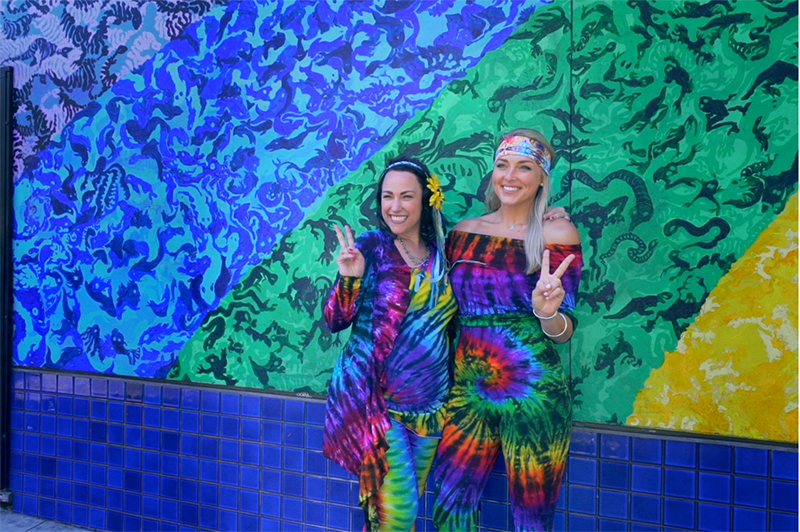 Kelly (left) and Greer strike a pose in their psychedelic gear in The 48 Hour Destination.

As seen in The 48 Hour Destination TV series, where she hosts Flight Centre travel consultant Greer Gardiner on a tour of the Haight-Ashbury neighbourhood, Sunny is the epitome of all things hippie, despite being born well after its heyday. Her store, Love on Haight, which she took over in 2012, is a psychedelic tie-dye explosion of swirling colour. Those feel-good vibes inside the store are no accident. As a teen, Sunny says she felt “out of place” until she came to the Haight and felt at home. 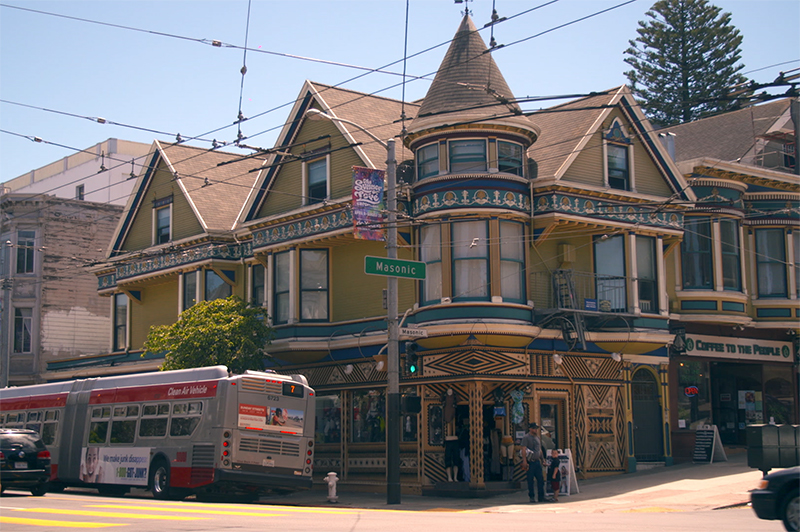 A street view of iconic Masonic Avenue in Haight-Ashbury.

However, over the years the shine had worn off this iconic neighbourhood, with homelessness and drugs replacing the hope of that hippie generation. With the purchase of Love on Haight, Sunny and her friends made it their mission to revitalise Haight Street by bringing back the colour, creativity and consciousness that the area was known for.

“I feel it is my duty being on the corner of Haight and Masonic to carry on the traditions that happened here 50 years ago,” Sunny says.

“In 1967, when 100,000 youth came to the Haight, the government didn’t know what to do. The community stepped in and took care of the people with the first free clinic, Haight-Ashbury Free Clinic, and Huckleberry Youth Programs, which was the first homeless youth house in the US – both are still open today.

“All these things are what the Summer of Love is about, and what the Haight stands for – community!” 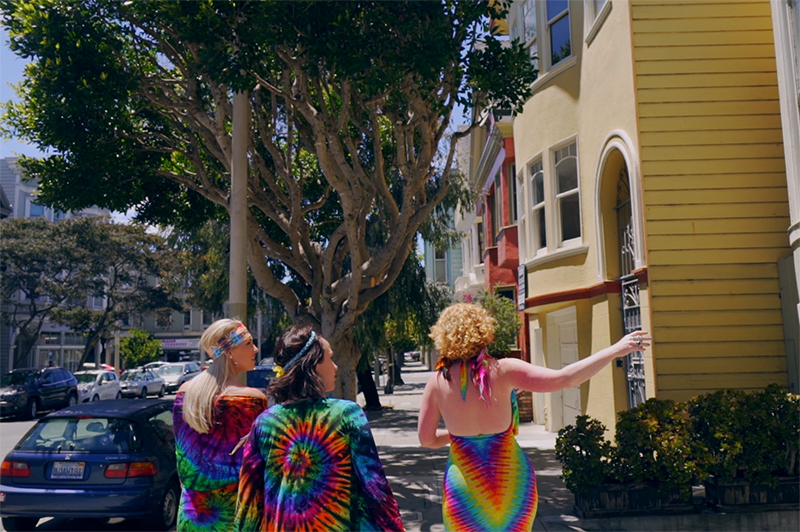 Sunny takes Greer and Kelly past some of the historic houses of Haight-Ashbury, some of which are dubbed the 'Painted Ladies'.

These days, Haight-Ashbury is divided into two areas; Upper Haight, which is the shopping area up to Masonic Avenue, while the Lower Haight is more diverse with a proliference of music stores and clubs. In The 48 Hour Destination, Sunny styles consultants Greer and Kelly in day-glo gear from her store for an immersive walk around the Haight, checking out all the flower power spots.

“This is why people should come to the Haight. You feel the history emanating off the walls,” Sunny says. “In a block and a half, you can pass by the houses where Janis Joplin, Jimi Hendrix, The Grateful Dead, Country Joe, the Hells Angels, and many more lived. The colour, creativity and consciousness is back, and you see it in the sparkles on the sidewalk.” 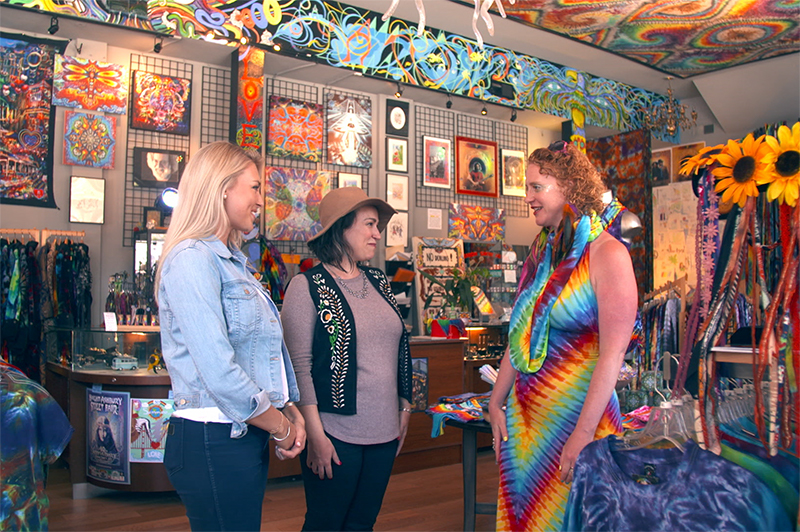 The welcoming and ever-so colourful interior of Love on Haight.

“Community is back in the Haight, and we are leading by example. Come to the Haight and feel the love. Witness the magic of San Francisco and take it back to your community – be kind.”