Just Back From Kyoto: Temples, Tastes And Travel Tips For Japan

Just Back From Kyoto: Temples, Tastes And Travel Tips For Japan

The ancient city of Kyoto is Japan’s spiritual heart, where scene-stealing temples and shrines capture the essence of a time gone by. It’s also a culinary capital, with the standout Nishiki Market one of its must-see attractions. Flight Centre travel expert Katie Lawrence recently returned from Kyoto with a smile on her face and a handful of stories. Here’s what she had to say...

Q. What drew you to Kyoto in the first place?

This was my first time in Japan and I had this idea of Kyoto being the traditional part of Japan, so I really wanted to see it for those reasons. I’d seen the pictures of the incredible temples and the amazing bamboo forest, so those were definitely experiences I wanted to have.

Q. How did your experience measure up? 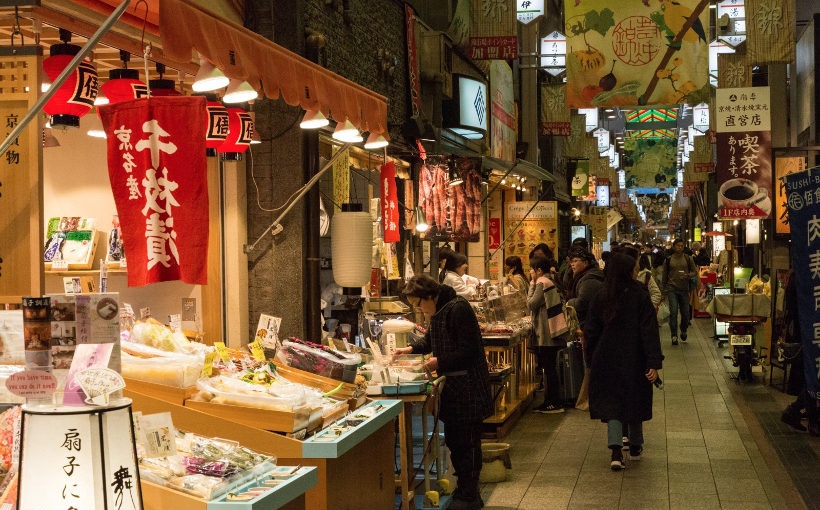 The Nishiki market is filled with delicious foods and treasures to explore. Image: Steve Lawrence

Q. What were the highlights?

So many things. I love Japanese food so a big one for me was the Nishiki Market. It’s a narrow, five-block long shopping street lined with more than a hundred shops and restaurants. I’ve heard it called “Kyoto’s Kitchen” and some of the shops give out small samples of things for you to try. There were just so many food options. You’d walk past and see all the pickled vegetables, loads of seafood, and it was just fascinating to work out what was what, especially with the pickled vegetables. We did a bit of a tasting as we went around. We had some scallops on skewers, which were delicious. 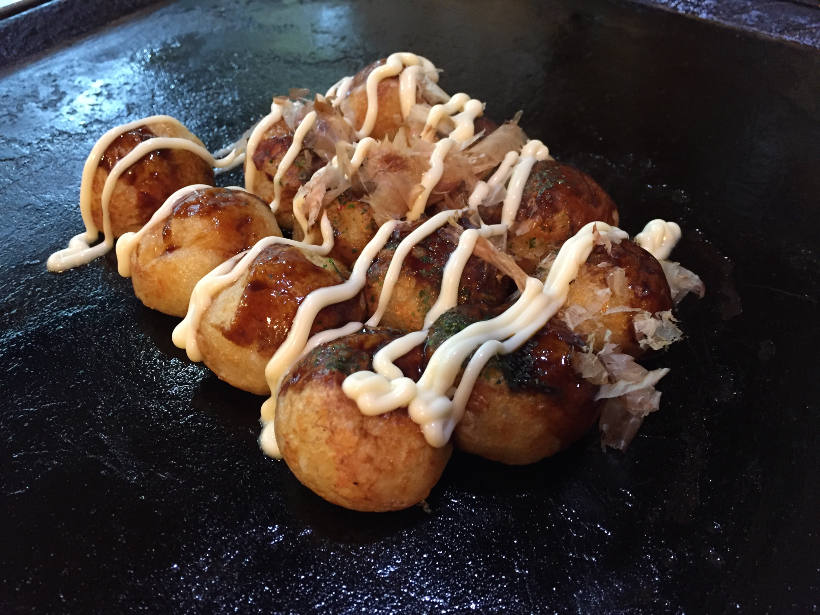 The food in Kyoto doesn't disappoint. One of the highlights is of course Takoyaki balls. Image: Katie Lawrence

We also had Takoyaki balls­ – the octopus ones – which I love. We also tried a Japanese pancake. There was so much food there and it just all feels really fresh because they’ve got all the ingredients for sale behind the food. It wasn’t just for tourists; there were locals there as well.

Also walking through, there were a couple of really interesting places to pick up some souvenirs from your trip. One of them was a shop selling many types of chopsticks, and you could get them engraved for free with your name on them, in English on one side and then in Japanese characters on the other. They didn’t charge any extra for it, either. They’d also package them really beautifully and it struck me as a lovely, personal kind of gift.

The Golden Pavilion gets its name for the gold leaf that adorns its exterior. Image: Steve Lawrence

The Golden Pavilion was another highlight, a Zen Buddhist Temple covered with gold leaf. It was really stunning. And so cheap to go in, if you can get a bus and make your way there. Walking up, you come around the corner and then wow, it’s that amazing view. The temple opens at around nine, but my advice would be to get there as early as you can, before the tour buses arrive. Or you could always go later in the day too. 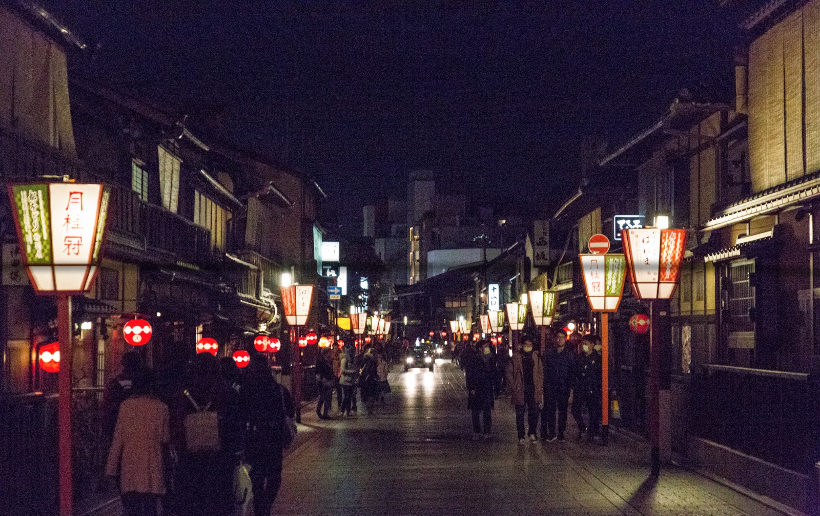 Kyoto is even more charming by night. Image: Steve Lawrence

The Night Walking Tour through Kyoto was also really nice, with an English-speaking guide. We departed at 6pm for about an hour and a half. One thing I didn’t know was that in Kyoto, Geisha are not referred to as Geisha. They are called ‘Geiko’ which means ‘Woman of art’ and apprentice Geisha are called ‘Maiko’ which means ‘Woman of dance’.  Our tour guide’s mother had been a Maiko or Geiko herself, so she had a lot of genuine stories and facts to talk about. We did see some authentic Maiko and Geiko scurrying off to work, which was a bit of a treat. 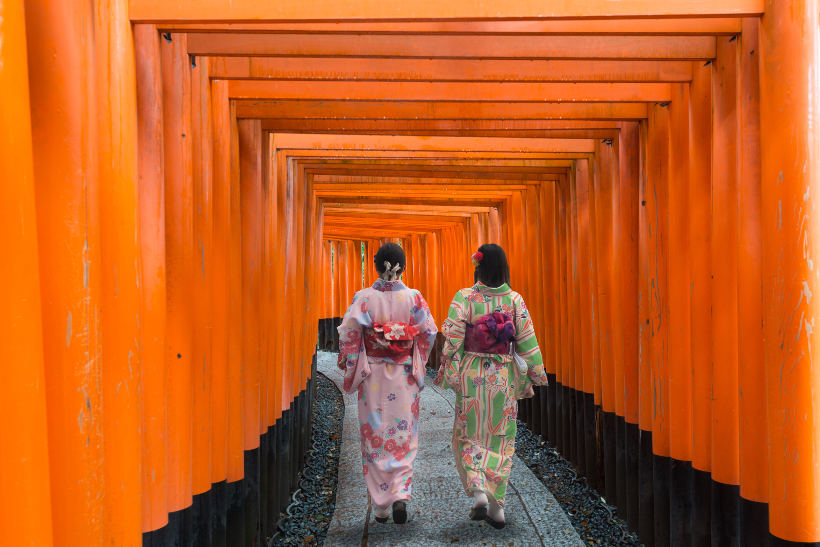 The Fushimi Inari Taisha shine is home to an incredible number of tori gates, well worth the visit.

Fushimi Inari Taisha (Shrine) was also something I had really wanted to see. The most fascinating part is just how many of the tori gates there are – they just go on forever! Before I went, I knew there was a walk up the mountain but to actually see the tori gates, one after another, was incredible. For the full walk we were told to allow 2 – 3 hours, but we didn’t have enough time so we just went about a third of the way up, which still was far enough for the crowds to diminish so we could grab some tourist-free photos. There are also things to look at on the way up, as well as a few vendors when you can get drinks and food.

I can’t forget to mention the Bamboo Groves of Arashiyama. There’s no entry fee here so you really can go as early as you like, and that’s something I’d definitely recommend. You could even go on a dawn walk if you like. It’s not as much of a forest as I expected, but there are other things you can do near there. It did have this magical feel… I imagine if you were there on your own it would be a very serene experience. The leaves created this soft whooshing sound; it was very beautiful. 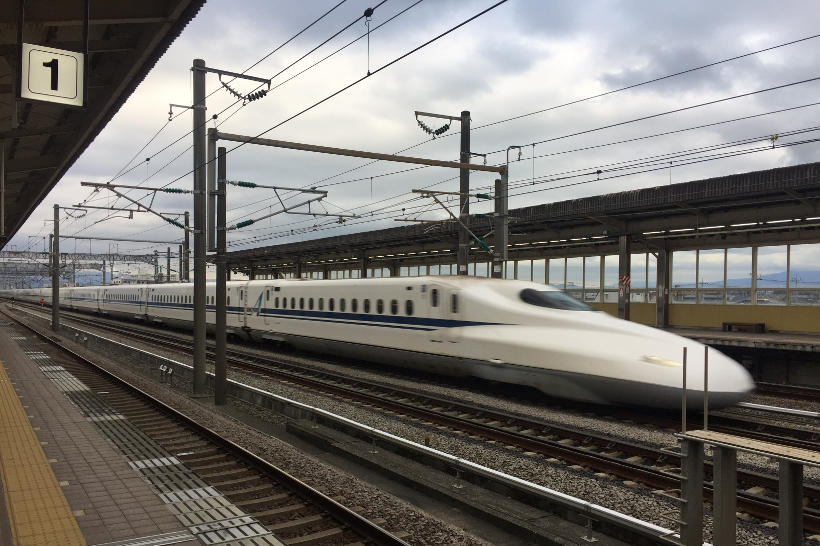 Q. What advice would you give travellers planning a trip to Kyoto?

There’s a bag service that we used which was very handy, where you can have your bags sent on from your hotel to your next hotel, ahead of you. Takuhaibin Delivery Service is the name and it was so convenient. Another hot tip was to book a window seat on the right side of the train if you’re coming to Kyoto from Tokyo. If the weather is clear, you’ll see Mt Fuji!

In terms of beating the crowds, this is a given but make sure you get to major attractions early, or late after the rush. Even in low season the top sights are busy, but some are open 24/7 so that gives you more options.

As for other tips, I think you need to probably avoid eating or drinking as you walk around because in Japan that is considered rude, although it could be changing a little. Also, I’d check out your rough itinerary to see if it is worth getting a 7, 14 or 21-day rail pass. Bullet trains are a nice experience – not to mention pretty fast!