While Ireland is known for stones that you give the gift of the gab, tiny mythical creatures dressed in green coats and four leaf clovers - the Emerald Isle is not usually associated with culinary exploration. However, for food and wine personality, Lyndey Milan there were a couple of reasons why wanted she wanted to take a gastronomic journey around this picturesque destination. 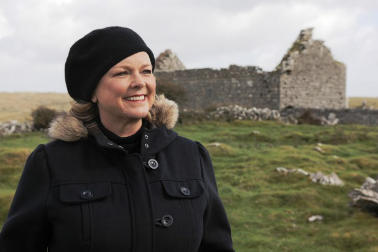 Lyndey in The Burren

"I did a series in Greece and there was the architecture. Ireland also has an incredible history, which I was keen to explore. But there are also many Australians that are of Irish descent, so I think the Irish personality has flavoured the Australian personality. The Irish are warm, hospitable and have a great sense of humour. And they love a drink. I filmed in Ireland about eight years ago and I just loved it, so I was keen to return."

Lyndey explains to Flight Centre that she loves to travel to see the fresh produce and watch it go from the paddock to the plate - an opportunity she relished during her Irish exploration. Her exploits in the Emerald Isle are currently being broadcast as an eight part television series entitled Lyndey Milan's Taste of Ireland on Foxtel's LifeStyle FOOD channel. Lyndey's journey began in the Northern Ireland capital of Belfast before heading into the Republic to admire the incredible landscapes of the Connemara and the Burren. The culinary exploits conclude in Dublin, where Lyndey is given a private tour by local blogger Donal Skehan.

"During my travels in Ireland I was delighted to find that the cold soil of the country really down grow fabulous produce in the same way that here in Australia, wine from cool climates has that great taste. I found the intensity of flavour is incredible. People would say, "Are you making a television show about cabbage and potatoes?" I'd reply, "Well yes, but have you tasted them - they're delicious!" she said. 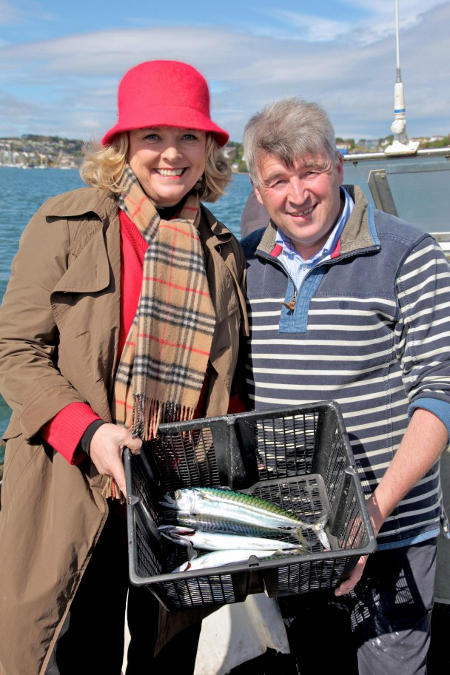 "It was the seafood that really blew me away. That was the biggest surprise. It was great to try Galway Oysters, Mud Fish and Turbot. I went fishing in Kinsale in County Cork with local chef Martin Shanahan. He has a really broad accent and was just adorable. I caught mackerel. It was really fun for me to get my hands on stuff and then cook it; to catch your own fish and cook on the beach with the water behind you was magical. I butterflied the mackerel, fried the fish on both sides and it served it with a warm potato salad and chorizo. I shared the meal with the crew who loved it."

Other highlights from her trip include dining at Rayanne House in Belfast where the chef recreates meals that were served on the Titanic. Lyndey says the experience is particularly atmospheric because the famous Belfast docks can be seen from the restaurant. She particularly enjoyed asparagus and watercress salad with champagne – saffron vinaigrette served with roast squab. Also in Belfast, Lyndey savoured a meal prepared by Niall McKenna at James Street South, a restaurant that focuses on preparing seasonal produce with a French twist. She ate grouse, which she'd never tried before. Devouring a meal prepared by Mickael Viljanen in Gregan's Castle in County Clare was another standout culinary experience. It was also a treat for Lyndey to visit Ballymaloe with its cooking school in County Cork and wander around the 400 acre estate, which includes vegetable gardens, chickens and cows.

"I couldn't get over how beautiful it was everywhere with the rolling green hills. There's a lot of dramatic scenery. For me though the Cliffs of Moher on the west coast was the most dramatic. The water was pounding into the cliffs, away below, with the foam was coming up over the cliffs; it was unbelievable. Also the Giant's Causeway on the Antrim Coast in the north was incredible with the massive hexagonal stones that come out of the water. The Burren is very moving when you hear about the history of the famine road. And of course Galway is beautiful," said Lyndey.

"I also went across to Inish Turk Beg, which is a private island in Clew Bay off the coast of County Mayo. It's a beautiful island. They make this fantastic whiskey there. Some say it's the smell of sea breeze that creates the unique taste."

Away from work, Lyndey, who's had a career in the media for the past 25 years, has a soft spot for Greece and she loves France. She has a friend who has a house in the south of France, where she can go to a different market each day, buy the freshest produce and bring it back to the house and cook it.

"When I'm at home, I love cooking Spanish food. I make a mean paella. But it depends on how I feel. The other night I did a beef cheeks with a Spanish twist. I don't really think about cuisine. I see something in the shop and that sparks my imagination. I buy it and cook it into a meal when I get home."

Lyndey Milan’s Taste of Ireland - Mondays at 7.30pm on LifeStyle FOOD on Foxtel.