Flight Centre's Courtney Nicholson heads off to adventure on Magnetic Island. Courtney takes the Fantasy Cruise Ferry to the island and learns the origin of the island's name. While on the island she does the Fort Walk and then circumnavigates the island, leaving from Alma Bay. 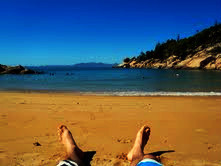 Early Monday morning, after a great weekend of V8's in Townsville, my partner and I caught the Fantasy Cruise Ferry to Magnetic Island for a few days of relaxation. We took the car across as well as the jet ski. I was very surprised how fast and easy the process of loading all the cars on and off the ferry was. While we were on the ferry, we got chatting with one of the Fantasy Cruise staff and he gave us a bit of background on how the island got its name. Apparently, in 1770 Captain Cook sailed past the island and his compass malfunctioned so he attributed it to the island, believing it to contain a mysterious magnetic force. The theory has since been proven wrong, but the name ' Magnetic Island ' stuck.

The ferry was nice and fast and after about twenty minutes we were there. We literally had to drive around the corner and we were at our accommodation, 'Mantra One Bright Point'. The accommodation is nice and modern; the rooms are open plan apartment style. We found this handy because we didn't have to eat out every day.

The island is very pretty and the majority of it is national park. One ‘must-do', is the Fort walk. Back in World War One, a defence base was built consisting of two gun emplacements, an observation tower, and a command post. The walk was great; there are signs the whole way along that explain each landmark and the history behind it all. We did the walk in the afternoon which meant we were at the observation deck at sunset.....it was absolutely amazing! 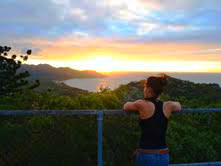 The next day we dropped the jet ski in at Alma Bay and did a lap of the whole island .We stopped at a few of the amazing secluded beaches along the way and saw so many sea turtles popping up around us. It actually took a lot longer than we thought as we hit some pretty big waves on the far side of the island and had to go pretty far out or get stuck on the shallow reefs. I definitely recommend it as a way to see the whole island from a different perspective, it is stunning!

Magnetic Island is a great place to holiday if you want to relax or have some adventure. You can do it on any budget and still have a great time. Definitely a must see!

Looking for more information about travelling to Magnetic Island? Contact [email]text=Courtney Nicholson[/email], an International Travel Consultant with Flight Centre based in Coomera City, Queensland who can be reached at 1300 281 152 or by [email]text=email[/email].