Malaysia: Things You May Not Know About the Petronas Twin Towers

Malaysia: Things You May Not Know About the Petronas Twin Towers

Dominating the Kuala Lumpur skyline are the twin towers of Malaysia’s Petronas building. Glittering by day and shining by night, they reflect the nation’s ambitions as a global player, and afford far-reaching views of the capital from on high. They have become synonymous with the city, but here are some things you might not know about the Petronas Twin Towers. 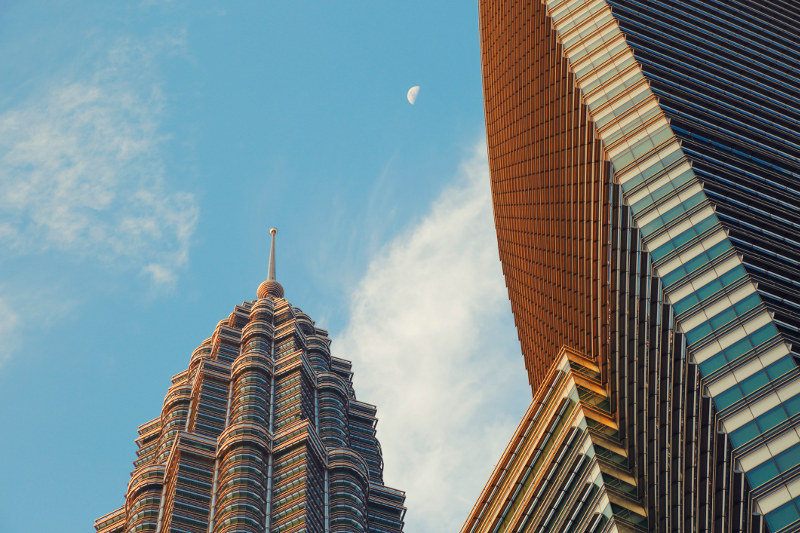 The towers were built in the shape of an eight-pointed star. Image: Getty

Several cultural motifs are incorporated into the design of the building. Each tower takes the shape of an eight-pointed star, created from two interlocking squares. This Islamic geometric pattern represents the principles of unity within unity, harmony, stability and rationality. With the skybridge, the towers form an M shape for Malaysia, a shape that also references traditional basket weaving.

Interior motifs reflect local handicrafts and songket or weaving patterns, while wall panels and screens are inspired by hardwood carvings from the east coast of Peninsular Malaysia. And the floor designs are based on patterns of pandan weaving and Bertram palm wall matting. 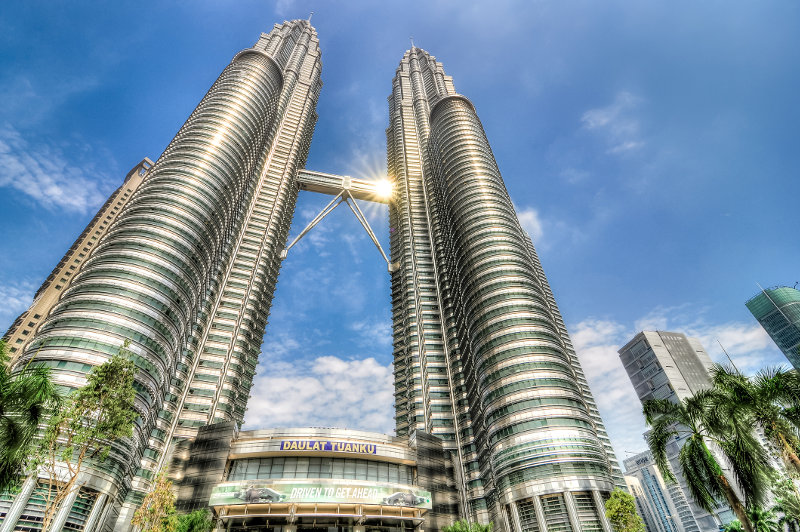 The skybridge, which links the two towers, is the world's tallest two-storey bridge. Image: Getty

The towers stand 451.9 metres high and rise 88 storeys into the air. When they were completed in 1996, they constituted the tallest building in the world, until they were eclipsed by Taipei 101 in 2004. These days they sit just outside the Top 10.

However, they still qualify as the tallest twin towers in the world. The mid-level skybridge, which links the two towers, is also the world’s highest two-storey bridge, and affords views almost as impressive as the viewing platform on Level 86.

French ‘Spiderman’ Alain Robert has climbed the towers without equipment three times. His first attempt in 1997 saw him arrested on the 60th floor. During his second attempt in 2007, he surrendered to police on 60th floor. He finally made it to the top in 2009.

Austrian BASE jumper Felix Baumgartner set the world record for the highest parachute jump from a building, when he leapt from the towers in 1999. 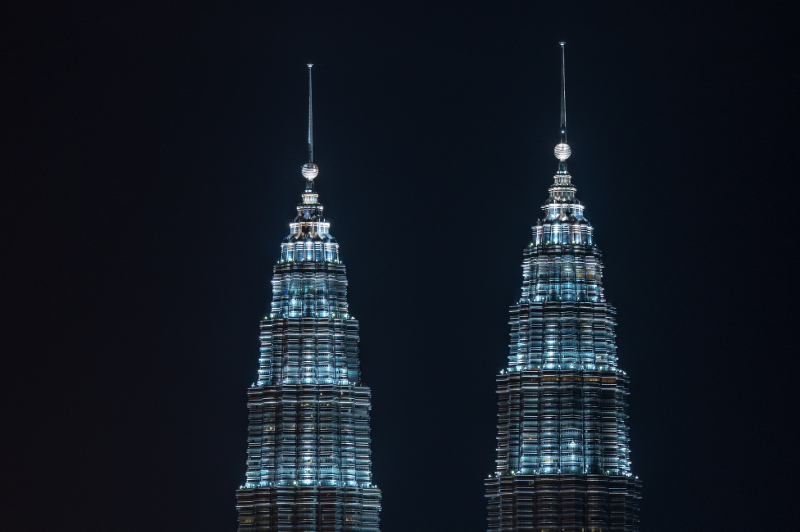 The spires and ring balls light up the Malaysian night. Image: Getty

The towers were built on a former race track, with excavators removing more than 500 truckloads of earth a night to create the 30-metre-deep foundations. To make the slab, 13,200 cubic metres of concrete were continuously poured over 54 hours for each tower. Then there was the six-year deadline (instead of the usual eight years) – two construction consortia were hired to build a tower each, and raced each other to the top.

The result is twin towers covered in 33,000 stainless steel and 55,000 glass panels; with pinnacles made up of 23-segment spires and ring balls comprised of 14 rings of varying diameters. The towers have double-decker, high-speed lifts – 20 of them – plus six service lifts and four executive lifts, which have the longest rise of any office building in Malaysia.  It takes 41 seconds to shoot up to the midpoint of the towers. 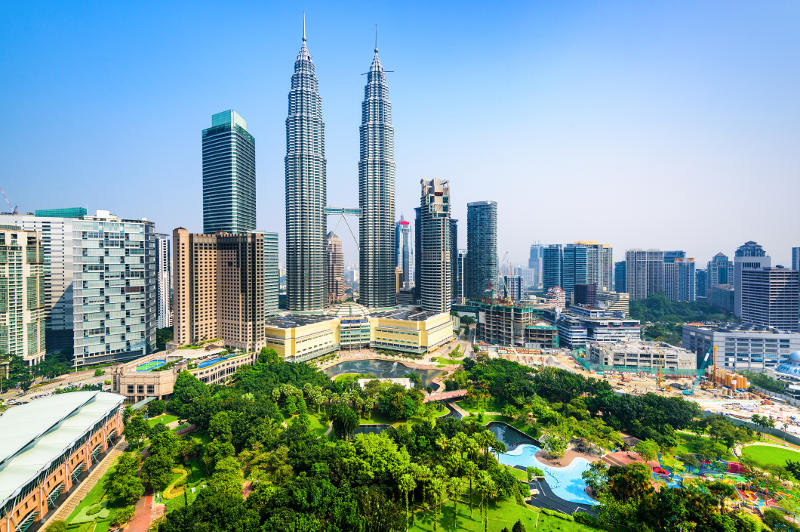 A green haven awaits at the base of the Petronas Twin Towers. Image: Getty

While the views may get all the attention, there’s lots more to do at the Petronas Twin Towers. The six-level Suria KLCC Mall at its base contains big retailers, all kinds of shops and a food court. Also in the building is the Petrosains Discovery Centre, with interactive science displays; as well as a concert hall that hosts performances by the Malaysian Philharmonic Orchestra.

The building is surrounded by KLCC Park, a green haven that boasts Lake Symphony, whose main fountain shoots water 42 metres into the air; jogging tracks and walking paths; waterfalls, fountains, and reflecting pools; a children’s playground and public pool; and a mosque.

The 1999 film Entrapment, starring Sean Connery and Catherine Zeta Jones, filmed its climax at the Petronas Towers, as the duo attempt a daring heist and escape.

Visit your local Flight Centre store or call 131 600 for more advice and the latest deals on travelling to Kuala Lumpur.