Get Your Kicks On Queensland's Route 66

Get Your Kicks On Queensland's Route 66

Route 66 is a lie. There, I said it. This year marks 30 years since the iconic Will Rogers Memorial Highway (yep, even its name is a big old fib) was removed from the US Highway System. If Route 66 is on your bucket list, you might want to turn the clock back to 1984.

Only remnants remain of the Mother Road that once stretched over 2,000 miles between Chicago and Los Angeles. People still retrace some maintained parts of the historic Route 66, of course, but interstate highways have changed the face of America's Main Street forever.

Sorry to burst that bubble, but as a consolation I'm going to tell you about another big daddy road trip - and this one doesn't come sandwiched between long-haul flights! 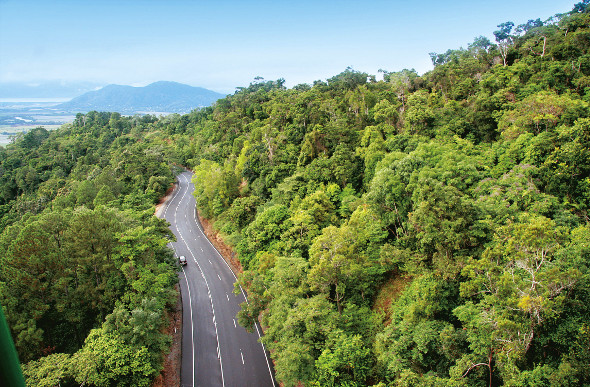 On the road again in the Tropical North (Image: TEQ)

Having hit the highway between Cairns and Brisbane three times (talk about an 'odd' number), I'm a firm believer that you can't call yourself a Queenslander until you've seen both the top and tail of our angular state.

The 'Big' Pacific Coast Touring Route actually snakes its way across state lines, starting in Sydney and ending in Cairns. This epic road trip is not for the faint of heart or tender of feet, so I advise focusing your adventure north of the border. But hey, I'm biased.

To do the Pacific Coast Touring Route justice and get the full 'tourist' experience, you should set aside two weeks to make the trip. I've done it in two days, but that was for efficiency – definitely not enjoyment.

Like any journey, veering off the beaten track reveals plenty of rewards. And unlike the State where slipping off the highway awards naught but badlands and ghost towns, Queensland's 'Route 66' offshoots to shanty beach towns, lush wine country, waterfall circuits, tropical food bowls and the ancient, sun-bleached Outback.

Before you hit the open road...

When local Gold Coast surfers make their way into the morning swell, that's your cue to hit the road. You won't be behind the wheel for long before you hit Brisbane, but I strongly advise spending a day or two getting to know this cool little capital. 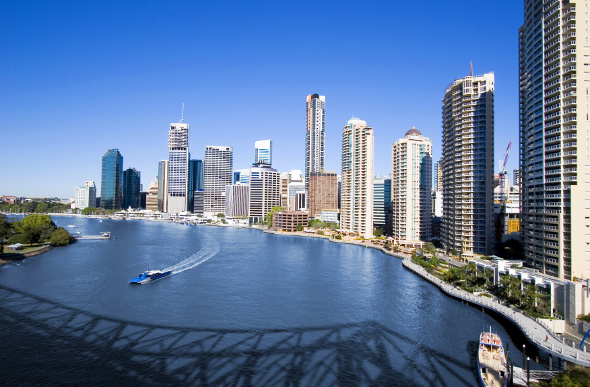 Brisbane: the Sunshine State Capital lives up to its moniker

In south east Queensland you're either a 'Sunny Coast' or 'Goldie' person. For me, it's all about the Sunshine Coast. Chilled beachside hubs backed by rolling Hinterland? Bliss.

Home to the annual Gympie Music Muster, this former Gold Rush town is your first taste of country Queensland – and there's plenty more to come! 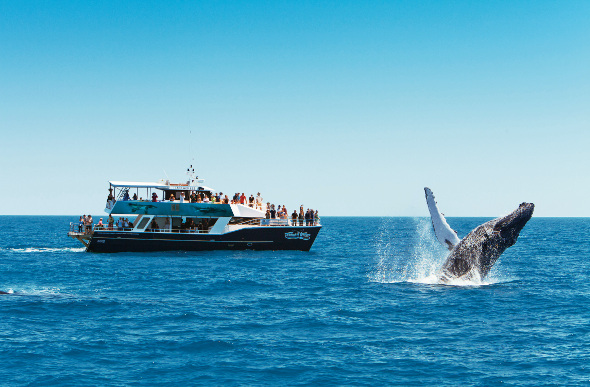 Hervey Bay is famous for one big, breaching, splashing, fin-slapping attraction from late July to early November each year. Hervey is the only place in the world where gentle Humpback Whales actually stop to play and put on a show!

'Bundy' is no doubt famous for its molasses-based spirit, with a rum distillery dating back to 1888, but the tiny turtles hatching early each year on the protected sands of Mon Repos make for an equally intoxicating experience. 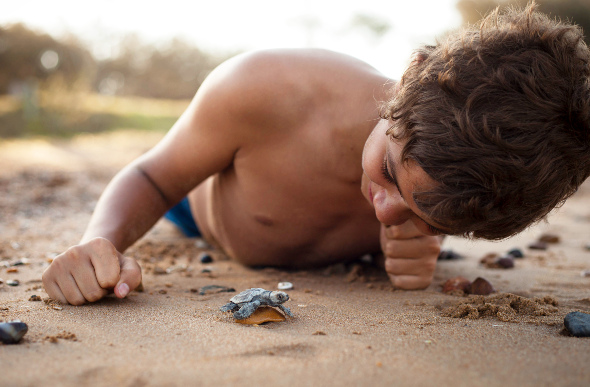 Halfway to everywhere – that's Gin Gin. Once voted Queensland's friendliest town, the town so nice they named it twice is yet another Sunshine State pocket bursting with classic country charm.

Industrial on the surface with deep historical roots, you might be surprised to learn the Gladstone region is the birthplace of Queensland. Visit the Town of Seventeen Seventy (formerly known as 1770) where Captain James Cook rammed the Endeavour ashore and voila, a state was born! 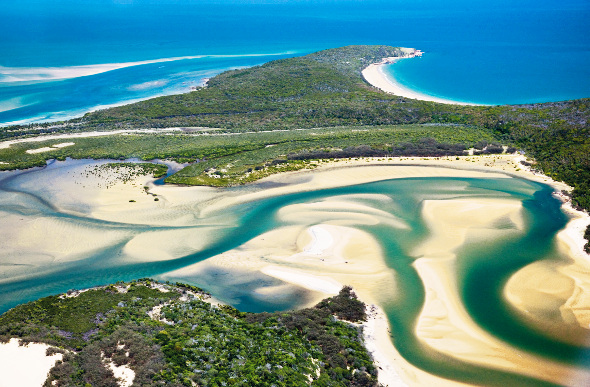 Whitehaven Beach? Nope! These are the swirling sands of the 1770 inlet (Image: Darren Jew / TEQ)

The crown jewel of the Capricorn region is Rockhampton – gateway to the Southern Great Barrier Reef. Rocky is Australia's beef capital so a steak dinner here is mandatory.

This is the longest and dullest stretch you will have to endure, but Mackay will make up for it. Scoff if you will, but this Central Queensland town has a pumping small bar scene. I recommend BURP Eat Drink, the Vintage Room and The Rabbit Hole. 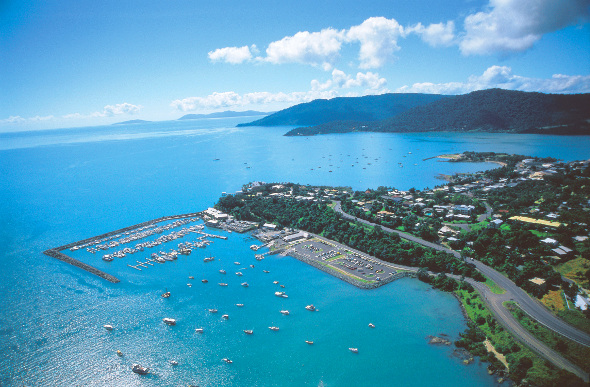 When you suddenly realise there's a disproportionate amount of backpackers around, you've arrived at Airlie Beach – mainland launch-pad to the Whitsundays. Airlie is party central any time of year, but you will probably want to avoid Schoolies week when things get extra crazy.

What's that big, golden orb in the distance? It's Bowen's iconic Big Mango! Restaurant chain Nando's nicked the big mango in 2014 (no joke) for a marketing stunt, but it's back and all is right with the world. The Big Mango is a certified 'Big Thing' and makes for an epic selfie. 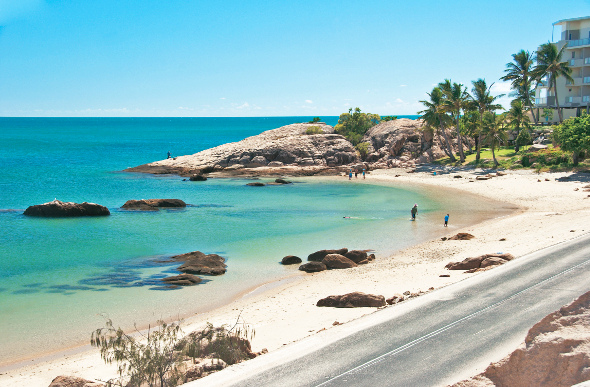 Haven't had enough sand & sun yet? Stop off in Bowen (Image: TEQ)

Until now, Outback Queensland has been relatively quiet on Pacific Coast Touring Route, but the Burdekin Shire delivers another dose. The sugar cane towns of Home Hill and Ayr are surprisingly popular bases for shipwreck diving, given the SS Yongala wreck located off the coast.

It's out of the sticks and back to civilisation in Townsville. I suggest stopping here for a couple of nights, taking a day trip out to Magnetic Island and catching a local sports game. The Cowboys are an obvious choice, but the city really gets behind the Townsville Fire women's basketball team! 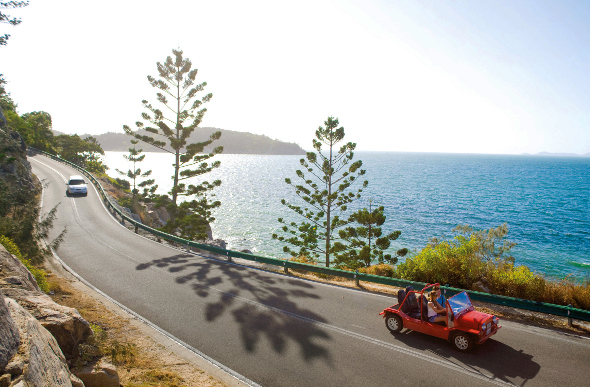 A day trip from Townsville to Magnetic Island (and hiring a mini moke) is a must (Image: TEQ)

When you hear about a town being cut-off during the wet season each year, that's Ingham. This low-set, agricultural town is an epicentre of Italian culture and is also home to Wallaman Falls – Australia's longest single drop waterfall.

Cardwell is the classic pit-stop between Cairns and Townsville. There may not be a whole lot happening around these parts, but by this stage you'll be grateful for a servo pie and a clean bathroom – both of which Cardwell does very well. 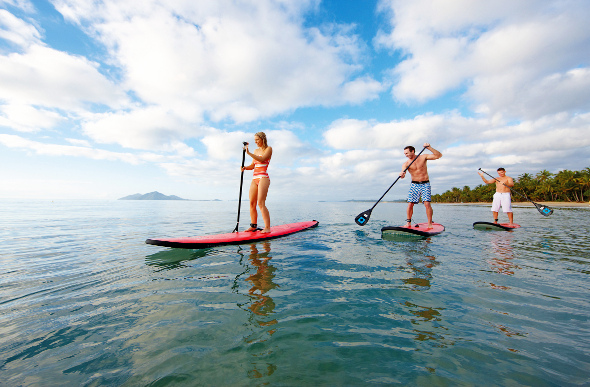 Never failing to rank among the state's best beaches, Mission Beach is the kind of place where local North Queenslanders take their leave. Plan a stopover in this casual coastal hub and ferry out to Dunk Island – a slice of the Great Barrier Reef just four kilometres offshore.

Last but absolutely not least is Cairns – epicentre of adventure and al fresco happy hour. If you're itching to get back on the road and see even more of this great state, head north to Palm Cove, Port Douglas and the Daintree, or take a quick spin up the Kuranda Range for a day exploring the Atherton Tablelands where the rainforest meets the Outback. 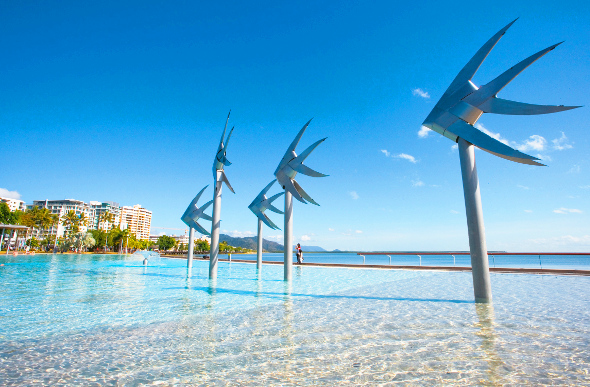