Roads To Roman Ruins In Europe

Roads To Roman Ruins In Europe

Australia is a long way in time and distance from Ancient Rome, so it is easy to consider this awesome empire as an abstract idea, leaving it almost in the realm of mythology. But set foot in the Eternal City and, and centuries of history come hurtling into the here and now.

And the very real calling cards of Roman emperors and foot soldiers, gladiators and shopkeepers are waiting for you all across Europe. Here is but a very small list of sites that will remind you the past is never really very far away. 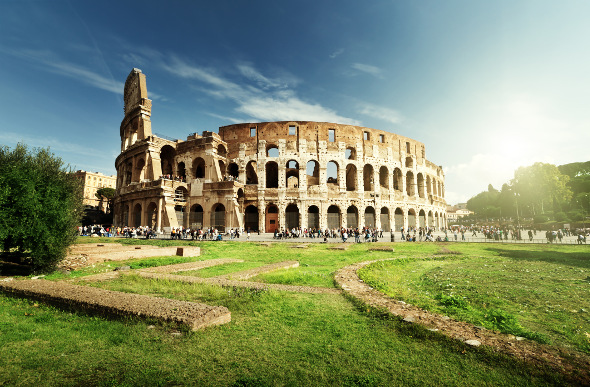 The Colosseum is an imposing presence in Rome. Picture: Getty Images

All roads lead to Rome, so let’s start there. The Colosseum (aka Flavian Amphitheatre) is a thrilling example of the empire, a vast 50,000-seat arena that witnessed mighty gladiatorial contests and animal fights. It was inaugurated in AD80 by Emperor Titus, with 100 days of deadly games.

Even though two-thirds of the original building have been destroyed through fires, earthquakes and plunder by Roman popes and aristocrats who used its travertine for their palaces and churches, it is still a mighty presence in the Eternal City. Be sure to take a guided tour of the hypogeum – underground passages beneath the arena floor where the animals were kept. 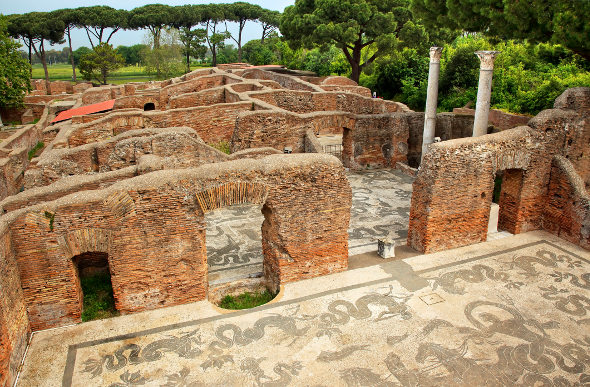 Patterned floors in the Baths of Neptune. Picture: Getty Images

Naturally, there are many, many more Roman ruins scattered across Italy. One of the less crowded options is Ostia Antica, the well-preserved ruins of a port town that was the gateway to Rome for hundreds of years. The site, about half an hour from central Rome, is now a couple of kilometres from the sea, and dates back to the fourth century BC.

It has a Roman theatre – which is still used for cultural events – the Baths of Neptune, a forum, and the oldest known synagogue site in Europe, as well as typical homes, shops and a public toilet. Also visit the museum and bookshop, and take a guided tour.

Also try: The well-preserved ancient Roman towns of Pompeii & Herculaneum, which were buried under ash from the eruption of Mount Vesuvius in AD79. 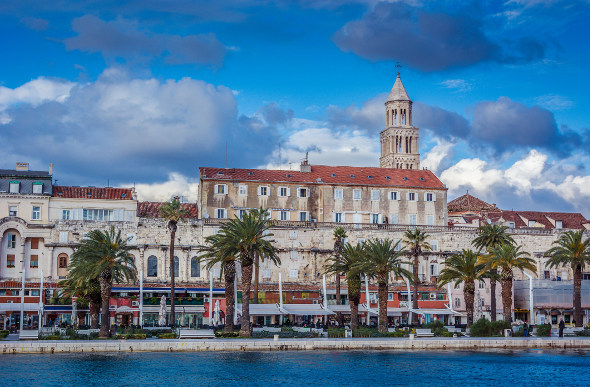 Catch the overnight ferry from the Italian sea port of Ancona – which itself has a Roman monument in the Arch of Trajan – to the city of Split in Croatia and you will have the joy of seeing World Heritage-listed Diocletian’s Palace rising from the white-stone harbour in the golden light of dawn. It was built in the third and fourth centuries AD, and contains the palace as well as barracks.

Now in the heart of Split, the ancient site is a strange mix of shops, apartments and restaurants that have sprung up over the centuries – you can even see washing hanging from the windows. Wander through the site, which now makes up Split’s Old Town, and you might stumble across Roman mosaics or a granite sphinx.

Also try: Pula (ancient Polensium) in Croatia, with its well-preserved Roman amphitheatre, which holds summer concerts and festivals to this day.

In search of Paititi: Lost City of the Incas 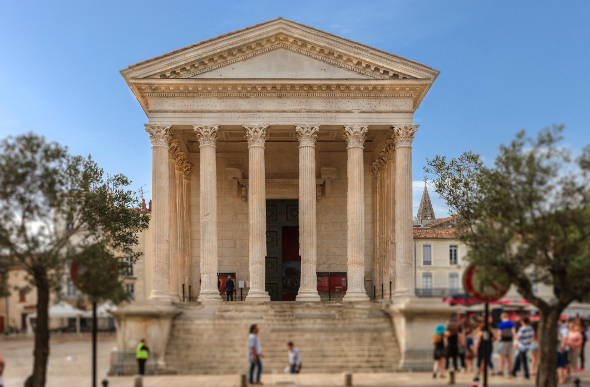 This temple in Nimes has one of the best-preserved facades of any ancient Roman temple. Built in 16BC by Marcus Vipsanius Agrippa and dedicated to his sons around 4-7AD, it is said to have been inspired by the temples of Apollo and Mars Ultor in Rome and is renowned for its harmonious proportions and beauty. Nimes also has the Nimes Arena, a Roman amphitheatre; and the Magne Tower, built by Augustus.

Also try: Not far from Nimes, at Vers-Pont-du-Gard is the wonderful Pont du Gard Roman aqueduct, built in the first century AD; as well as the Barbegal aqueduct and mill at nearby Arles. 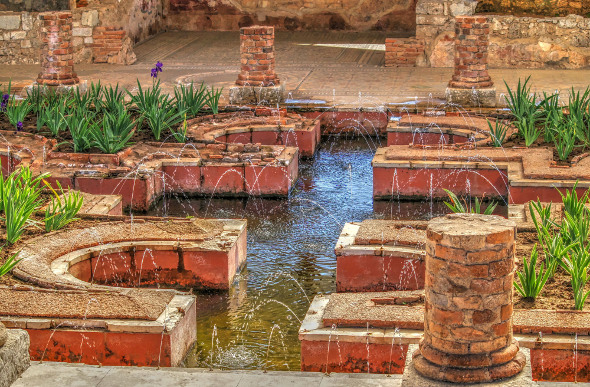 The Romans arrived in Conimbriga in the late first century BC, and these days you can see the remains of homes and buildings in the walled settlement, plus a road, mosaics and public baths. Visit Repuxos House, with its wonderful garden, as well as the museum and its found artefacts that tell the story of everyday life in ancient Rome.

Also try: The Roman ruins of Troia, built in the first century AD, where you can see a large fish-salting complex, Roman baths, mausoleum and cemetery. 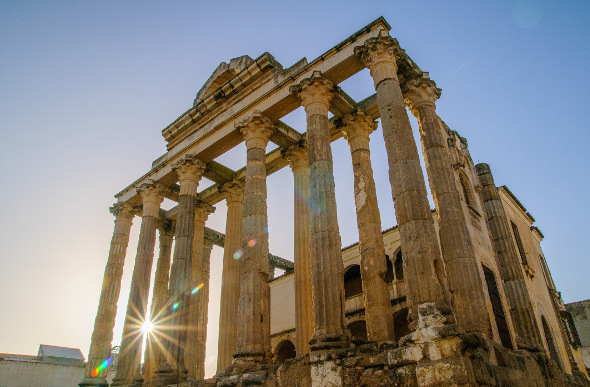 The Temple of Diana at Emerita Augusta. Picture: Getty Images

Now known as Merida, the Roman colony of Emerita Augusta was founded in 25BC by Augustus. It was the capital of the Roman province of Lusitania. The World Heritage site contains a Roman theatre, amphitheatre, circus for chariot-racing, bridge over the Guadiana, aqueducts, the lovely Temple of Diana, the Trajan Arch, funeral buildings and necropolis.

Also try: Empuries on the Costa Brava, which has both Greek and Roman history, where you can see the Greek market and port, a necropolis, and Roman walls, mosaics and amphitheatre. 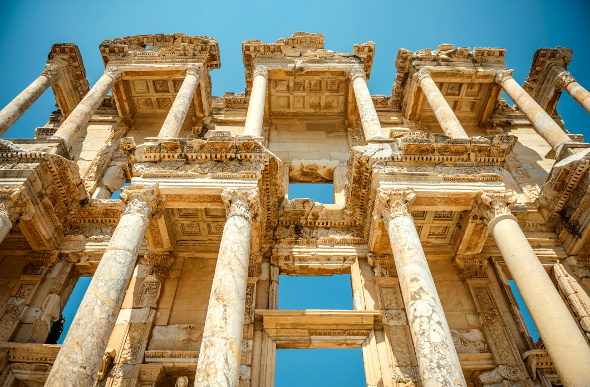 The Library of Celsus at Ephesus. Picture: Getty Images

Ephesus, near modern-day Selcuk, began as an Ancient Greek city around the 10th century BC. After much tussling between the Greeks and the Persian empire, it eventually became part of the Roman Republic in the late second century BC. Today you can walk through its streets, see its amazing houses, and visit its temples and stadiums. Don’t miss the Library of Celsus and the Temple of Hadrian.

Also try: Aspendos, over which the Greeks and Persians also fought, with its Roman theatre ordered by Marcus Aurelius that is still in use today.