Such is the interest, 650,000 people applied for tickets to the England versus Australia pool match alone. This is exciting news for players and fans because it guarantees stadiums will be packed with supporters. And few supporters of the game they play in heaven embody passion for rugby like Northern Hemisphere crowds.

I remember standing in the middle of the Millennium Stadium in Cardiff as it shook to the deep baritone of 70,000 Welshmen and women.

The electricity of that moment... there is nothing like it! Every hair stood to attention as the rolling vibration took hold of my senses. It was awe-inspiring. 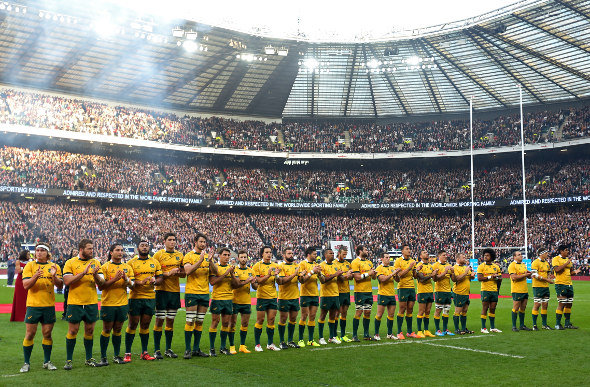 The Haka is often thought to be the most intimidating experience in rugby, but to feel an entire stadium bind together in ancient song is to know what it is to be on the wrong side of a nation. That experience also leads to a strange, paradoxical sensation - that of being surrounded by a throng of people while simultaneously feeling almost entirely alone.

As professionals, players are expected to turn up for every match. But the 'big' matches are different, and I've never come across a pre-match pep talk that could rival a crowd for the ability to evoke emotion.

In the Northern Hemisphere, a culture of song dates back millennia and is deeply embedded in national psyches. Sporting events draw these deep parts of native identity to the surface, to produce a sense of occasion that younger nations struggle to match.

If the tones of 'God Save the Queen' or 'La Marseillaise' before a Test match don't remind you that a heart resides in your chest, nothing will. We all want the kind of experiences that make us feel most alive. That’s why playing the 'big' matches matters so much to players.

Being observed while you work on a project is one of the best ways to distract a person from performing well. But professional sportspeople must learn to handle being studied by tens of thousands of highly critical and opinionated voices.

In places like Hamilton, New Zealand, the challenge becomes greater still. A heaving crowd armed with cowbells combines with the snarling sounds of chainsaws that buzz from behind each of the goalposts. It's about as intimidating and disorientating as a sporting event gets.

[embed]https://www.youtube.com/watch?v=XtY4I0ohV3A[/embed]
But the real battle to deal with pressure occurs in a far lonelier place than rugby stadiums; it rages squarely in the minds of each player.

In the anticipation of matches, all kinds of superstitions and bizarre rituals begin to reveal themselves from the depths of the human mind. Prayer, lucky charms and even luckier underpants are all part of the strange pre-match landscape.

In the last year of my rugby career I finally understood the subjective nature of meaning. When I connect with the fact that we are all stardust on a tiny planet falling through space in an infinitely large universe, the outcomes of games is set squarely into perspective. Against the backdrop of time and space can any sporting fixture really be considered important?

And yet if a team of people decide to imbue a moment with meaning, who is to say that it doesn't exist? Perhaps nothing reveals the charmed existence my life has been than the ability to ponder such questions.

Speaking of good fortune, Kurtley Beale must suspect some Irish vintage in his veins! After doing his level-best to self destruct, he not only managed to survive but promptly found himself on the Spring Tour of 2014. At his best he is the Australian player most blessed with an X-factor, and Michael Cheika seems to have extracted the best version of Beale at the Waratahs.

If Beale can reproduce last year's form it will be interesting to see how he fits into World Cup equations. My prediction is that he will find himself on the bench, shaping as the ultimate cover for every position in the backline except outside centre and half-back.

In many ways Beale personifies the Wallabies of recent years: unlimited potential that can’t seem to deliver consistency. If Cheika can do for the Wallabies what he has done for Beale, we could well be celebrating the ultimate rugby success on October 31st.

Clyde Rathbone does things. Some of these things include playing 26 Tests for Australia and writing about his experiences. In this column he will investigate the Wallabies journey to Rugby World Cup 2015.
more articles from this author