Phuket is one of the most popular beach holiday destinations in Asia and there is no shortage of airlines that service this route from Australia.

Jetstar currently offers a direct service from Australia to Phuket from Sydney and Melbourne.

Aside from the direct options, there are any number of connections available from different cities in Asia, which do not generally add too much time to the journey. Below is a selection of some our most popular ways to get to Phuket and the stopover options offered by those carriers. Price guide for flights to Phuket

♦♦ This is a fantastic price.

♦♦ This is a slightly below-average price. If you have the cheapest booking classes, there may not be a heavily discounted sale or travel could be during a shoulder season.

♦♦ This is an average price. The flights could be heavily booked or travel is during the shoulder or high season. If there are no sale fares available and the price is high, consider adding a stopover, which could reduce the fare.

♦♦ This is an above-average price. The flights are becoming very heavily booked and travel is during a high-demand period. Ensure all ticket options have been investigated, including any low-cost carrier offerings.

Seasonal guide for flights to Phuket

As a tropical island close to the equator, the weather in Phuket is warm and humid all year round. While there is little change in temperature, the biggest difference is in regards to rain.

The dry season is when precipitation is at its lowest. Rain is still common, albeit in short downpours that quickly clear. Although the dry season is considered to be the best time to go to Phuket, it is also the most expensive. The tourist high season causes equally high accommodation rates and airfare prices.

Even though it’s technically not that much hotter than the other seasons in regards to temperature, the humidity during this time is sky high.

For all its balmy weather, the days are ideally sunny and made for swimming, snorkelling and diving, though you will need to have the air-conditioning on at all other times.

As the temperatures rise, accommodation prices drop, so if you don’t mind a bit of tropical weather this can be a great time to visit Phuket on a budget. An added bonus is fewer crowds resulting in a more peaceful atmosphere.

Enjoy time out on the beautiful beaches but be sure to slip, slop, slap and don’t forget to cover up when you visit temples or wats. April is considered the hottest time of the year but is also the month of the vibrant Songkran Festival, celebrating the Thai New Year. 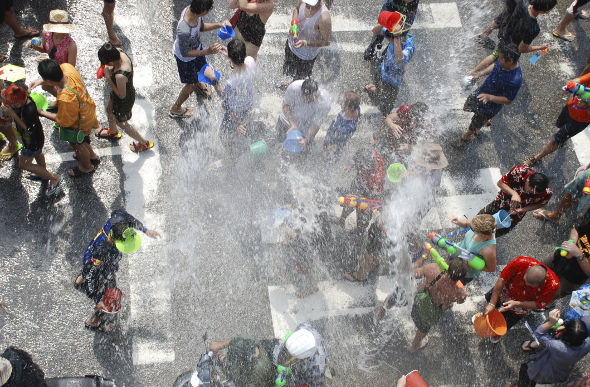 Get amongst the water fights at Songkran Festival (Image: Getty)

While rain in Phuket is common throughout the year, it falls at its heaviest from May to October. Granted, the wet season isn’t an ideal time if you’re looking to enjoy an outdoor holiday, but with heavy, yet short bursts of rainfall, you can get away with some damp moments before the sun shines again.

Not only are temperatures and humidity a lot more bearable, this period is considered Phuket’s low season, so if you’re looking for a budget break, it’s worth risking the rain.

Visit your local Flight Centre store or call 131 600 for more advice and the latest deals on travelling to Phuket.