How To See Niagara Falls

How To See Niagara Falls

Both cities tout themselves as having the best views of the falls.

The Canadian side is nicknamed the 'Vegas of the North' and has more hotels, more glitz and more glamour.

The American side is more about the warm and fuzzy nature offering. The Niagara State Park is one of the oldest in the USA and stretches out across more than 162 hectares of lush forest. 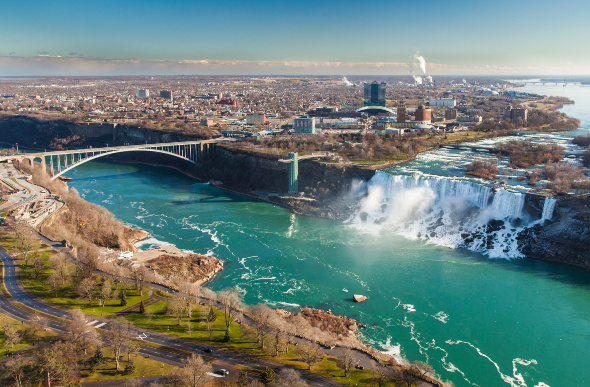 The Niagara Falls is an impressive sight on either side of the border (Image: Getty)

The three waterfalls that make up Niagara may not be the tallest or widest in the world, but Niagara Falls is certainly one of the most spectacular and most popular with more than 22 million visitors each year. The peak season occurs between July and August during the summer holidays.

Of the three, Horseshoe Falls (also known as the 'Canadian Falls') is the tallest at 57 metres and situated on the Canadian side of the border. There are also two smaller falls: the American Falls and Bridal Veil Falls, which are both on the US side.

Don’t fret too much though about your choice; either side of the border delivers breathtaking views. 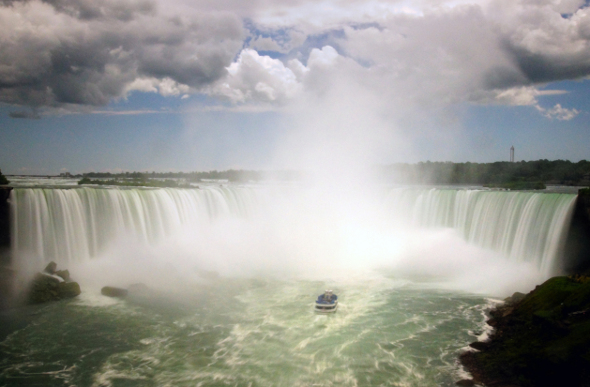 A Maid of the Mist tour approaches the Falls (Image: Getty)

If you decide to stay on the US park side, you can also easily walk across the border to the Canadian side to take in the panoramic view of Horseshoe Falls.  However, you will need to show your passport at the crossing and although Canadians accept US dollars, it's best to have local currency to avoid losing money on the exchange fees.

To get to the Cave of the Winds you will take an elevator down 50 metres to the bottom of Niagara Gorge were you will be outfitted in a colourful plastic poncho before heading along a timber walkway to the Hurricane Deck.

Here you experience the roar and thunder of Bridal Falls as litres of water flow down the gorge. It’s such a rush; you feel like you are in the eye of a storm. As you slosh your way back to the top of the walkway it's time to give thanks to the genius who invented the plastic poncho. 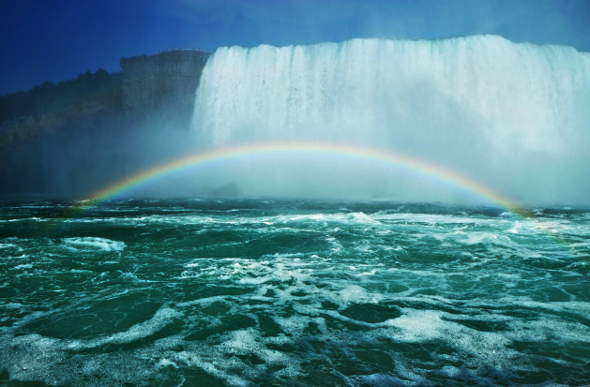 Soaking up more than an incredible sight from the boat (Image: Getty)

While on Goat Island make sure you take in the Three Sisters Islands and the statue of Nikola Tesla, the Serbian-born inventor whose passion for electricity lit up America.

If you are elderly or have small children you may want to forgo pounding the trails and opt for a leisurely ride on the hop-on-hop-off Niagara Falls Scenic Trolley service.

The service takes you to all the key spots.  This vintage tram with on-board touring guide will get you up to scratch with the history of the area while furnishing you with interesting facts.  It’s not cheap, but it’s a great option on a hot day.

Visit your local Flight Centre store or call 131 600 for more advice and the latest deals on travelling to Niagara Falls.