With a verdant scatter of five islands borne from countless volcanic eruptions, both emerald-green landscapes and sparkling seas vie for your attention in Samoa. 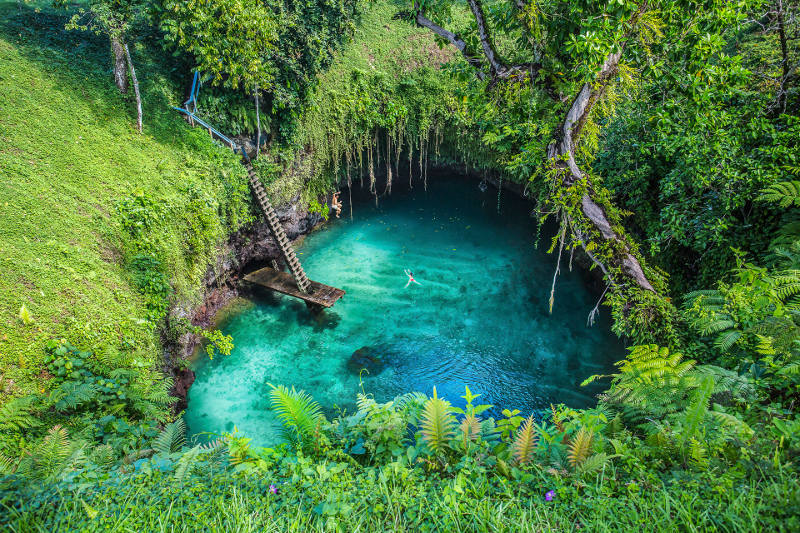 The only access to the sparkling emerald green waters of the pool is via a single ladder. Image: Sean Condon, Samoa Tourism.

Peek behind a palm and you’re just as likely to find a dense fertile valley as a white-sand beach in Samoa. Mother Nature certainly left her mark on these treasured islands, with one of the most captivating wonders the To Sua Trench. Literally translated as ‘giant hole’, the grotto consists of two large caverns joined by an ancient lava tube near Lotofaga village on the island of Upolu. The beauty of the ocean-fed, crystal-clear water of the main swimming pool is matched by the ethereal gardens that hang over its almost symmetrical 30m rocky basalt rim. Add in dappled sunshine and the distant sound of crashing waves, and the scene is set for living out all your mermaid (or merman) dreams. 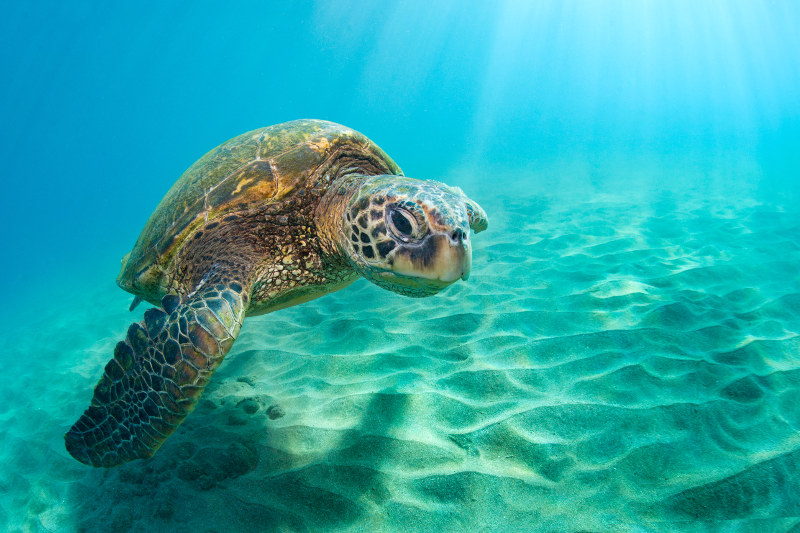 These majestic, ancient creatures can reach a weight of 185 kilograms. Image: Getty

The warm waters surrounding Samoa not only lure swimmers and snorkellers, but green turtles, too. These majestic creatures were once endangered, until Satoalepai villagers made it their mission to ensure their survival. The Satoalepai Turtle Sanctuary on Savai’i is one of the only places on the planet to swim with green turtles before they are released into the wild. Gigantic green turtles cruising slowly through their coral-clad dwellings often join snorkellers paddling around Namu’a Island off the southern tip of Upolu. 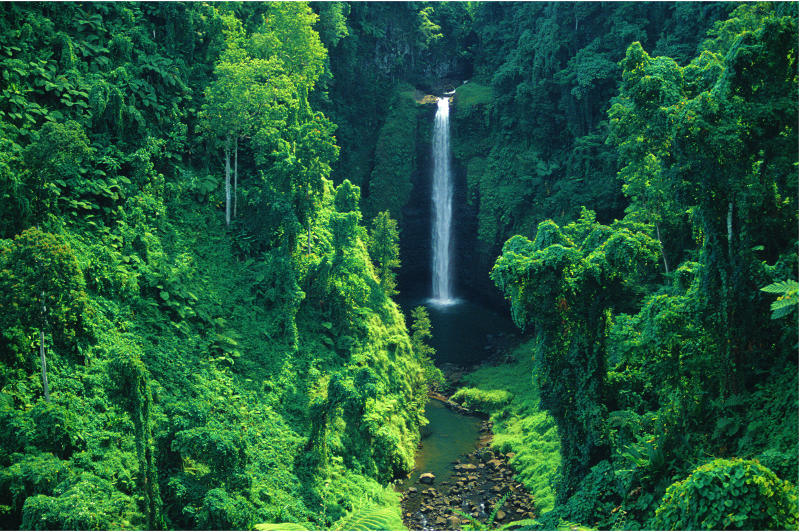 The village of Lotofaga is like ground zero for some of Samoa’s most spectacular sights. Nearby, dense rainforest foliage opens up to reveal Sopoaga Waterfall, a thundering cascade that plunges into a dark blue waterhole below. For a small entry fee, an observation deck off the main road offers uninterrupted views of the falls and its lush surrounds. The trail to the lookout itself is just as special – its length lined with abundant native flora identified by their scientific and Samoan names. 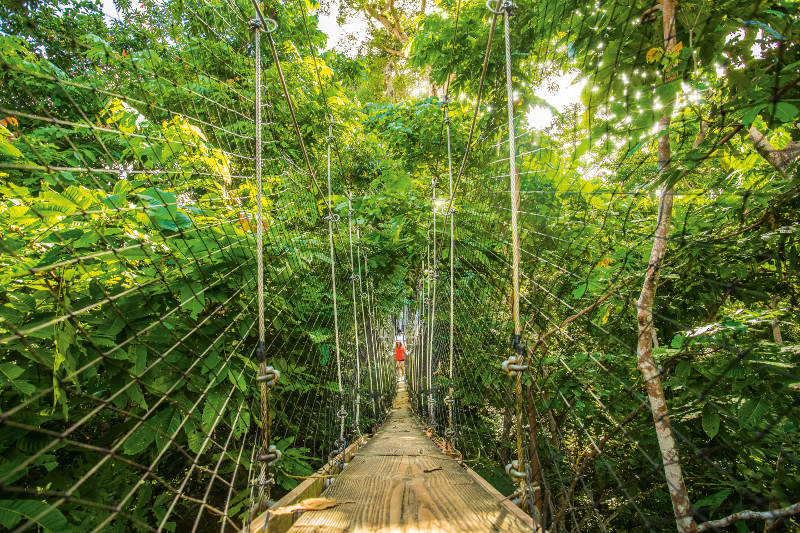 Where banyan trees tower over dense rainforests and fertile valleys are carpeted in lush foliage and palms, Samoa is as green as paradise comes, especially the protected Falealupo Rainforest Reserve. A 40m elevated canopy walk across a wobbly network of bridges and wooden platforms offers a close-up of the low-lying rainforest and gigantic banyan tree. Melodic bird song and croaking frogs create the perfect soundtrack to your stroll. 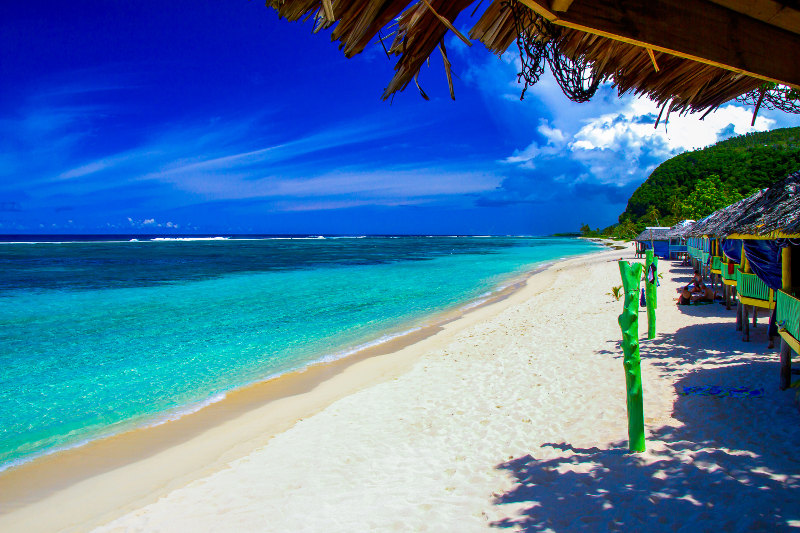 Transparent aqua water teeming with marine life – check. Soft white sand – check. Palm-lined vistas and ocean breezes – check. Lalomanu Beach on Upolu is a head turner, a jaw-dropper, a genuine holiday idyll. It may lack glamorous resorts serving umbrella-clad cocktails, but that’s its very appeal. Stay awhile in one of the airy beachfront fales to take advantage of the crowd-free stretch void of any footprints, other than your own. Paradise found.

Samoa isn’t just the geographical heart of Polynesia, but also its cultural centre. Fa’a Samoa (the Samoan way) is a 3,000-year-old philosophy that guides Samoans’ courteous dealings with elders, visitors and the environment. As such, travellers are welcomed warmly and treated with the utmost respect. The Samoan Cultural Village in Apia offers an authentic immersion into Fa’a Samoa, with a host of interactive activities showcasing many aspects of daily life. Expect weaving, carving and siapo cloth-making lessons, rousing dance performances, a kava ceremony and a hearty umu (underground oven) feast. A short 45-minute drive from capital Apia is a turquoise swimming hole named after the Piula Methodist Chapel it’s found beneath. This stunning freshwater seaside pool features two caves connected by an underwater tunnel, and locals and visitors alike come here to beat the heat and lay out picnic spreads. Bring snorkelling gear and a torch to explore the hypnotic underwater world and abundance of aquatic life.

Another example of the curious effects of ancient lava flows on Samoa’s landscape is the mesmerising Alofaaga blowholes near the village of Taga on Savai’i. When waves crash against the seawall, water rushes into underwater caves, shooting 20m into the air up vertical tunnels – the power of the waves at its most raw and mighty. Locals like to amp up the fun by throwing coconuts into the vents before they blow; it’s amazing to see just how high they fly into the air! 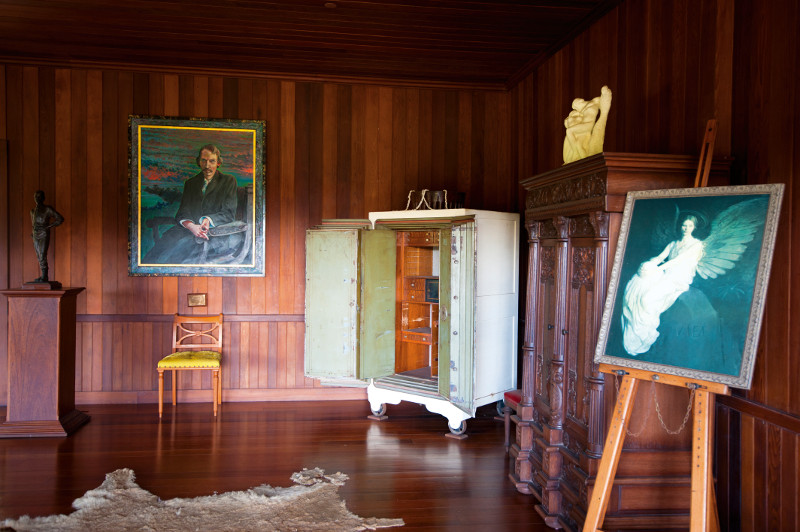 See many of the writer’s authentic personal belongings, as well as his library. Image: Samoa Tourism

He may be of Scottish heritage, but author Robert Louis Stevenson (of Treasure Island fame) is an adopted Samoan son. After a string of South Pacific escapades, he settled in Vailima on Upolu, fast becoming known as ‘Tusitala’ (teller of tales). His legacy lives on today through his restored estate. Visitors can tour his home and admire his personal effects, before a rainforest hike along the Loving Hearts track, which offers some of the best views on the island.

Vanuatu: The Dreamy All-Rounder
19 June 2019
Vanuatu is an archipelago nation of  83 islands where a vibrant culture thrives as vividly as the country’s spectacular reefs. Espiritu Santo is the
Read Time: 6.7 mins
The South Pacific 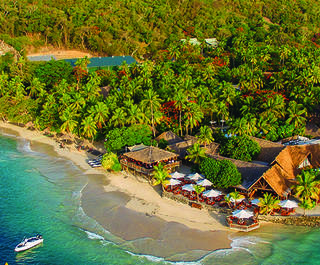