Adelaide is not usually thought of as having a strong beachfront culture  - usually as a Queensland or Western Australian attraction – but the city of Adelaide and the surrounding area are home to a surprising number of beaches, with everything from a seaside resort feel to an atmosphere of being a million miles away. 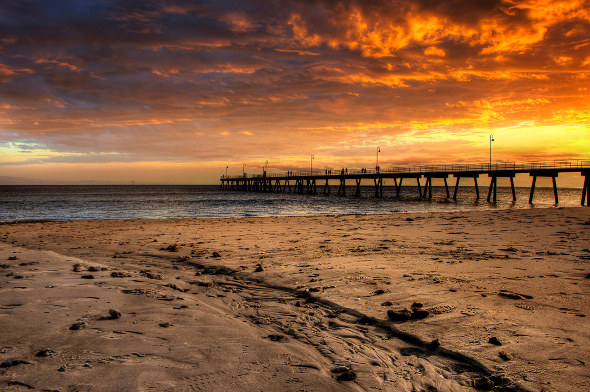 Adelaide's most popular beach, Gelenelg, is easily accessible at the end of the city tram line. (Image: Getty)

The best-known of Adelaide’s beaches, Glenelg is at the end of the city’s only tramline and was the site of South Australia’s first mainland European settlement, being established in 1836. The beach, popular for swimming and sports such as beach volleyball, is complemented by a wooden pier and a range of cafes, restaurants, bars, eateries and a multistorey entertainment complex – along with numerous shops and boutiques in the suburb itself.

One of the city’s most popular family beaches, Moana has something for everyone – from an off-leash dog activity area to barbecue facilities, a surf club, grassed areas and even the possibility of some waves.

Another popular Adelaide beach, Henley is less crowded than Glenelg but also features a wooden pier, an array of beachside dining, pub and coffee options, as well as plenty of sand. Alongside Glenelg and Moana beaches, it’s a favourite spot for Adelaide residents to head to in the summer.

About half an hour’s drive from Adelaide, Seacliff is part of a series of good swimming beaches along the city’s western shore and is also noted for its pub, serving food, drinks and live entertainment. 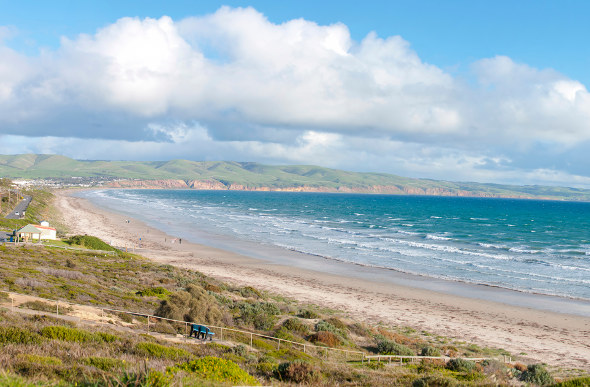 Aldinga is a peaceful beach away from the crowds of the city. (Image: Getty)

One of the interesting things about this beach, in Adelaide’s outer south, is that it’s possible to drive on parts of it. There’s also a nearby aquatic reserve which is a popular place for divers and snorkelers to take to the water as well. 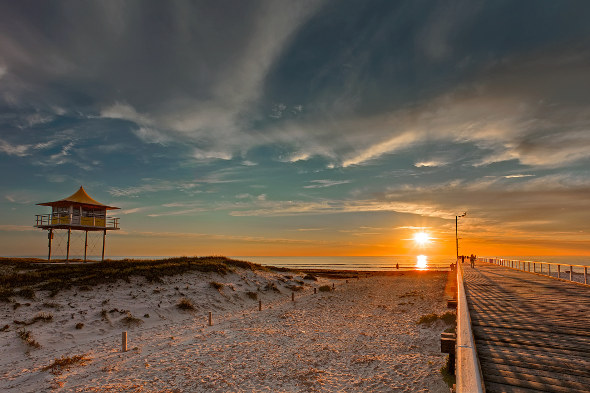 Located in Adelaide’s northwest, Semaphore Beach was once the site of a signalling station and still has an appealing historic and Art Deco atmosphere about it today. Besides the beach, which is complemented by a 585m long jetty, a war memorial clock, heritage narrow-gauge railway train, and the nearby Fort Glanville, one of the best-preserved 19th century forts in Australia.

The town, located about 77km south of Adelaide, is a popular tourist destination noted for its blue ocean, fishing jetty, range of cafes, and proximity to one of the state’s wine regions. The beach itself is a popular family destination, with a caravan park offering a potential overnight place to stay. 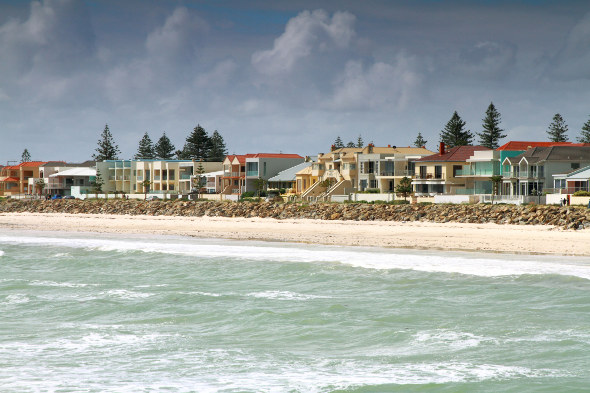 These houses on the beachfront at Grange have the best view in the city. (Image: Getty)

Probably the quietest of Adelaide’s beaches, the centrepiece is the jetty, built in 1879. The Grange Hotel on the esplanade was established in 1881 and there are also several parks and reserves in the area. The cottage of famed pioneer explorer Captain Charles Sturt is also in the suburb.

A bit of a drive from Adelaide and located at the tip of the Yorke Peninsula, Ethel Beach is about 450m long and named after a Norwegian ship which ran aground there in 1904, followed by a vessel named Ferret in 1920. The Ferret wreck can still be seen at the beach’s northern end. The trade off for the beach’s rugged setting and atmosphere is that there are several swells and rips in the water, so swimming is not recommended.

A popular destination for photographers and somewhere that features in many wedding photo albums, Port Wilunga Beach is about 40 minutes south of Adelaide and is well known for its natural beauty and unspoilt nature. Several picturesque ruins, including a jetty from 1868 and the harbourmaster’s cottage can be found here, along with the wreck of the ship Star of Greece, which ran aground in 1888 and can be seen at low tide. The cliffs overlooking the beach have several caves hewn into them, where fishermen once stored their boats and nets, and the fishing tradition continues today with many anglers still casting their lines into the beach’s waves.