The sharks circle the group of loud, shrieking swimmers, and two of the bigger critters that had been sitting, innocent looking on the bottom suddenly decide they like the look of us and head straight up towards our flipper-clad legs.

Our fingernails become one with the boat we are holding on to and our legs are somewhere up around our spleens. But they just swim calmly under us, having a back scratch on our fins before they melt back to the bottom.

We are in Bora Bora, which along with Raiatea, Tahaa and Huahine, is in the Society Islands of French Polynesia.

These islands are volcanic, with the ancient peaks and ridges covered in a thick, layer of lush, tropical vegetation which is a radiant green against the unbelievable blue hues of the lagoons that surround them. The air is scented with tiare flowers, (a type of gardenia) vanilla and frangipani, ensuring that unmistakable tropical perfume that caresses you as soon as you step off the plane. 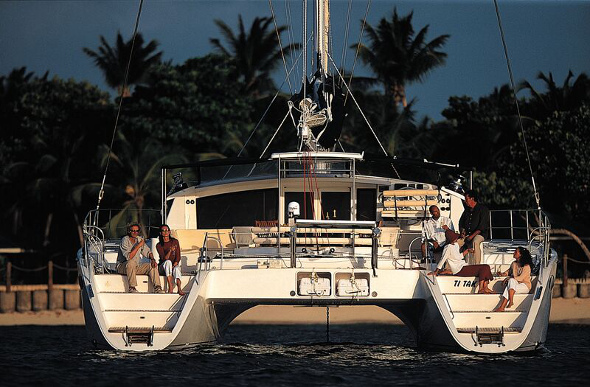 We are exploring this most romantic of destinations on board a yacht, the 60-foot (18.3-metre) Terehau, a luxury catamaran from the Dream Yacht Charters stable.

We are doing the three-night ‘Bora Bora Pearl Dream’ itinerary, boarding in Raiatea and disembarking in Bora Bora. We have one of the four guest cabins, with two French couples, Henri the skipper and Mihi the hostess and cook, our new ship mates.

On our first afternoon we anchor near the Tau motu off Tahaa and spend a few hours snorkelling in a coral garden and marvelling at the array of colours swimming by on fish of all sizes.

We glimpse a black tip reef shark in the distance, and back on board ask the affable Henri, if they are at all dangerous. He assures us that they are harmless, and that we will see a lot more of them over the next few days. 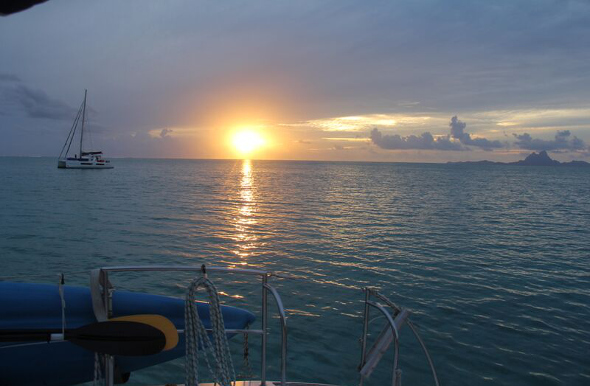 Sundowner time on board the Terehau (image: Helen Hayes)

Thoughts of sharks disappear with the sun as we drink our choice of either good French wine, champagne, a cocktail or a Hinamo beer with our new friends around the under-cover dining table on the spacious aft deck.

Conversation flows as easily as the tide, only halted by the dinner served by Mihi, who conjures up mahi in a delicious vanilla sauce with fresh green beans and local banana, followed by a dessert of brownies and cream.

Knowing that we were in such good hands with Henri and Mihi, sleep comes easily to the lullaby of calm water lapping against the hull of our floating home.

In the morning we set off for the four-hour sail to Bora Bora, which we can see in the distance, its mystical peaks rising Olympus-like out of the blue.

We lie on the trampoline gazing up at the sails or down at the water, or sit on the back deck just taking it all in in.

Another take on perfect Bora Bora. Bora Bora – Perfect for a Romantic Getaway

In The Home Of Sharks And Stingrays

Henri drops anchor as we approach Bora Bora, and we grab the snorkelling gear for our first aquatic adventure – swimming with reef sharks.

As soon as we jump in, we see not one or two, but 35 to 40 black tip reef sharks and two larger sharks sitting on the seabed. It is rather surreal to be in the water with so many of them, but they seem to be unfazed by this loud and gaily-attired bunch of visitors.

Even after we come face to face with the two larger sharks, (we later find out they were lemon sharks) we stay in the water as long as possible before returning to the good ship Terehau to swim with more creatures of the sea – stingrays.

We sink into the aquamarine water and find ourselves standing on a soft, sandy floor in waist-deep water. I feel a velvety form brush by my leg and let out a happy squeak as I see it’s a stingray, its large grey wings propelling it through our group.

There are more than ten of them, and it is a little disconcerting moving around with some of them sitting on the sand. Treading on one is not an option.

Henri is like the stingray whisperer and they are practically lining up to give him a salty kiss and seemingly hug him with their steel grey wings. We relax a little and pat our new found friends, not quite believing we are here, in Bora Bora, up close and quite personal with stingrays.

Over the next few days the Terehau takes us around the lagoon, and we anchor in different places giving us a really good look around this magical place. 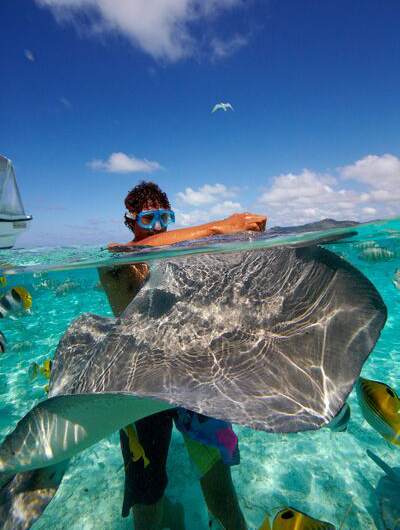 We see manta rays, eagle rays, more reef sharks and plenty of stingrays. We snorkel in magnificent coral gardens teeming with fish, swim off the boat countless times, read books, talk to Henri about life in Tahiti and just stare at the mesmerising water that is so ridiculously blue.

We spend a delightful afternoon at a motu, tucking into lunch on the island, lazing in deck chairs and swimming in the lagoon where we find some underwater statues and some eagle rays.

We enjoy delicious meals prepared by Mihi, chat over afternoon tea on the boat and have sundowners that linger long into the night. 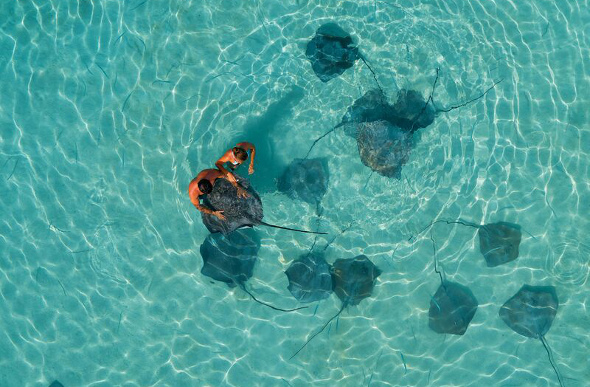 Sitting on the deck under a star spangled sky, we reminisce about our stingray and shark experiences, look through the fish guide book on board to pick out the many fish we have seen, solve the problems of the world and feel far removed from everyday life.

It is indeed blissful to be in Bora Bora.

Other great destinations for yacht charters

Visit your local Flight Centre store or call 131 600 for more advice and the latest deals on travelling to Bora Bora.

When not at home chained to the computer keyboard, I love nothing more than checking out ski resorts here and overseas, tropical islands, country towns, big cities, beautiful places to sail, and anywhere I can ride a horse. Twitter @helenhayes4 Instagram @helenhayesmedia
more articles from this author