Everyone and their second cousin has heard of Santorini, Mykonos and Crete. But hey, there are more than 6,000 islands in Greece scattered throughout the Aegean and Ionian Seas, which means there are truckloads of Greek Isles you’ve never even heard of. Here are six of these lesser-known islands that should definitely be on your radar. 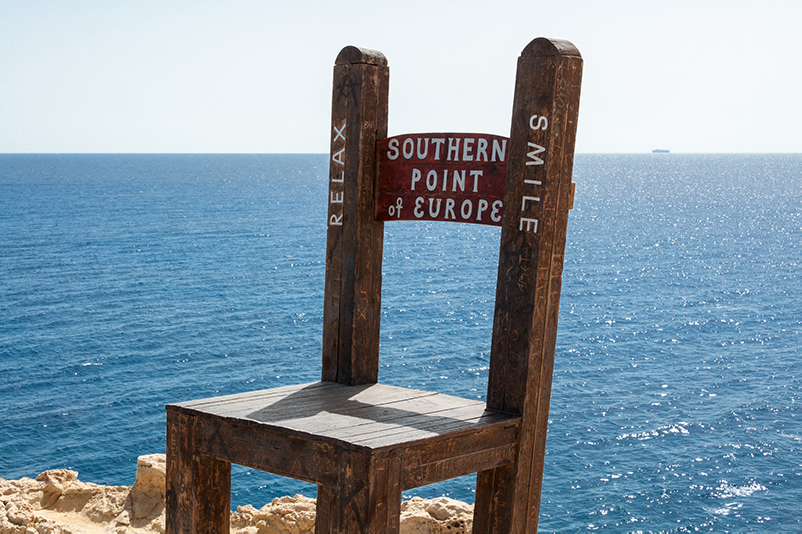 Gavdos is the most southern island in Greece — just beneath Crete — and it wasn’t for the Canary Islands, it would be the southernmost spot in all of Europe. It’s tiny too, with just 50 locals — its remoteness tends to dissuade even the Greeks from visiting. But take the ferry here and you’ll be met with the kind of unspoilt nature and Instagram-worthy beach pics that will have you wishing you took more annual leave. It kind of feels like your own private island, blessed with an exceptionally long summer — score! And as with many Greek islands, mythology is magically interwoven into the land here, with local lore proclaiming that Gavdos is the Homeric island of Calypso, where Ulysses was shipwrecked and lived for seven years. But be warned: there are no ATMs on the island and only a handful of accommodation options, so bring cash and book in advance because this level of tranquillity is totally worth it. There are two ways to get to Gavdos by boat: either from Paleohora or from Chora Sfakion in Crete. 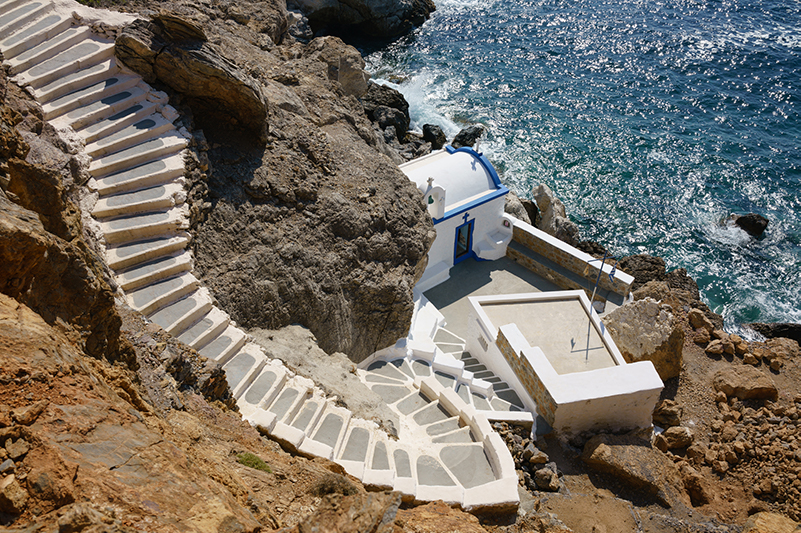 Despite its small size, Telendos — easily reached via a 10-minute boat ride from nearby Kalymnos and essentially a single mountain rising out of the sea — deserves a mention. Why? Well, let’s forget about the ancient Roman ruins, the castle and the three beautiful beaches for a moment and consider the fact that there are no roads on Telendos. Which means no cars, which means no traffic, which means peace and quiet. Just how long you’d like to bask in this languid tranquillity is entirely up to you: most visitors come for the day but stay a while longer to chill in the glassy water and dine at each of its six tavernas (try Zorbas for the freshest fish on the island) and there’ll be no regrets. Seriously. 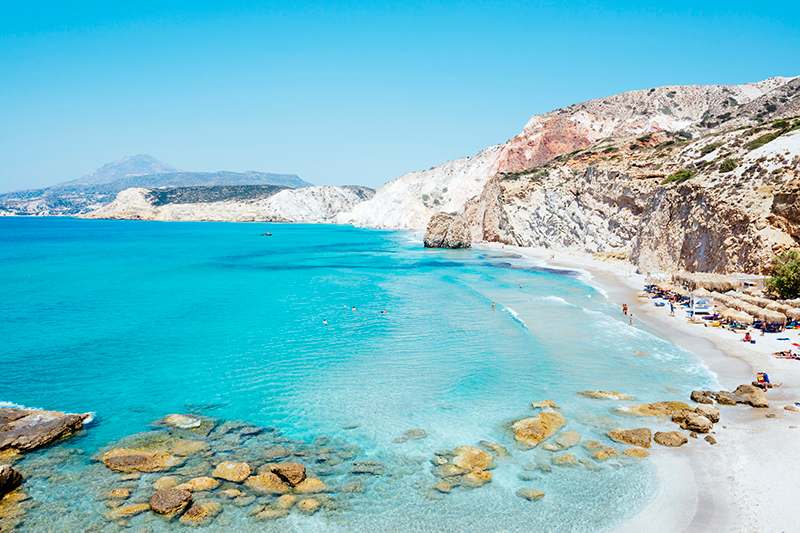 Milos is famous for its coloured-sand beaches such as the blindingly white Firiplaka Beach. (Image: Getty)

Dramatically rugged and sporting a geography likened to the surface of the moon, Milos is a languid volcanic island blessed with hot springs, ancient catacombs and literally dozens of beaches. Part of the Cyclades group (and easily accessible via Santorini and Paros), Milos has around 80 beaches to its name — some only accessible via boat or tucked away in coves — flaunting a stunning variety of sand colours: from blindingly white to volcanic black with a few red and grey beaches thrown in for fun. Soaking up the rays, in between swims at the popular beach Sarakiniko surrounded by its oddly shaped rocks, is a definite must-do. These rocks were formed by ancient volcanic activity and look decidedly chalk-like in the summer sun.

RELATED: Greece is the word for families. Here are the Greek Isles to know. 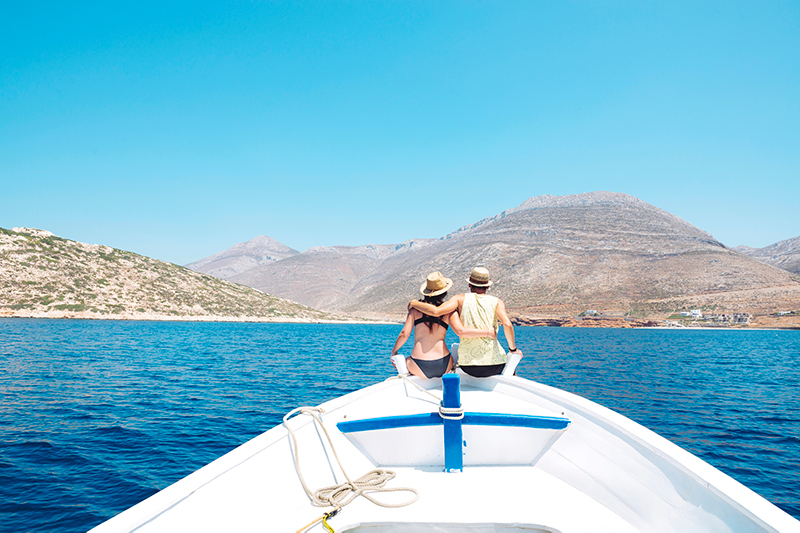 Looking at Amorgos island, a favourite for watersports and land activities. (Image: Getty)

Okay, so Amorgos isn’t much of a secret to the divers and hikers who flock here in search of the island’s terrestrial and underwater offerings but for the rest of us, this Greek island has been lying under the radar for, like, eternity. Well, that’s not strictly true, because Amorgos and its stunning 11th-century whitewashed monastery of Hozoviotissa, built into the side of a cliff, was featured in the French film, The Big Blue. But that was way back in 1988 and since then, Amorgos has retreated from the limelight, content to keep its crystal-clear waters, white-sand beaches and gastronomic gorging to itself, or to the trickle of tourists who take the ferry over here from neighbouring islands, such as Naxos, Ios and Santorini. 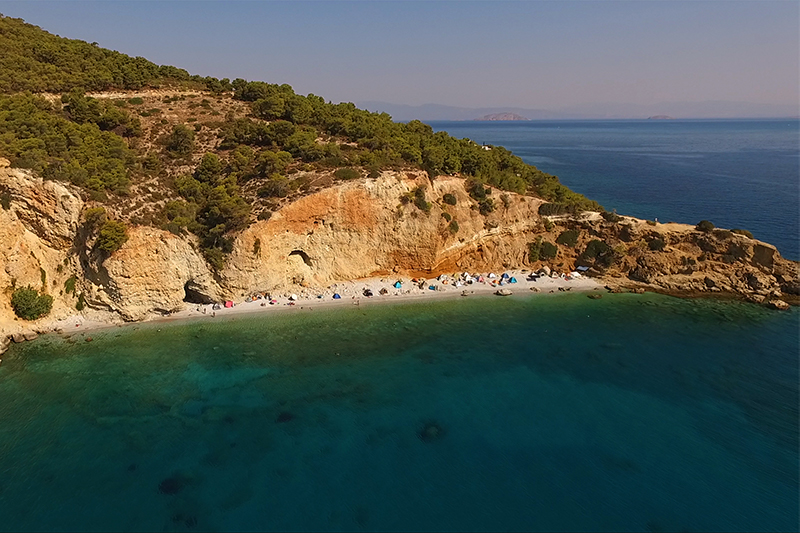 Agistri island (and its secluded beaches) is ideal for day-trippers from Athens. (Image: Getty)

Only a short one-hour ferry ride from the port of Piraeus in greater Athens, the small island of Agistri is the perfect destination for travellers short on time but keen on getting a taste of that Greek island experience. Of course, there are lovely whitewashed villages and excellent seafood here, and even a tourist train connecting Skala and Megalochori to Dragonera and Aponissos — the two most beautiful beaches on the island. And on the coast, the more energetic can kayak around the entire island, while others can simply admire the azure views. Just don’t come in July or August as you’ll have to share the island with the rest of the country who visits out of sheer convenience. 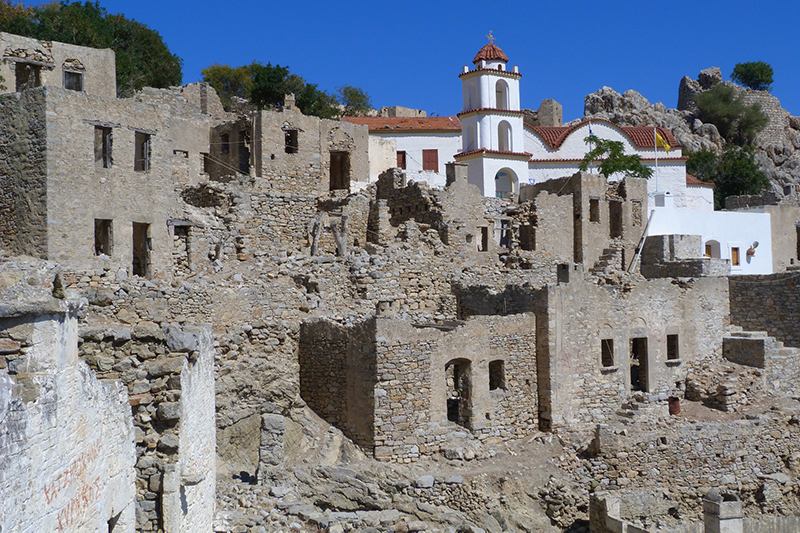 The ruins of the medieval village of Mikro Horio is a must-do on Tilos island. (Image: Getty)

Rhodes and Kos may be the most popular islands of the Dodecanese, but Tilos is definitely the group’s greenest Greek isle. In fact, it’s a lot lusher than most Greek islands. Famous for its wildlife, Tilos is especially popular with nature lovers and hikers, who set off into the gentle landscape in search of rare flowers, birds and hidden beaches. On the to-do list is exploring Mikro Horio, the island’s former medieval capital that now lays in ruin. Ferries to Tilos run from the port of Piraeus in Athens three times a week.

Inspired to visit the Greek Isles? Check out our deals on sale now!