Touring As A 20-Something Solo

Touring As A 20-Something Solo

I truly thought I was done with group touring. You know, the ones where you cram in as many European cities as possible, ticking off attractions as you get your selfie in front of them and staying in overcrowded hostels with shared facilities? Having toured Europe once before with a friend and lived in Canada for a winter season, I thought this style of touring was behind me.

I had enjoyed many once-in-a-lifetime experiences and created fond memories, but as I began to approach 30 (ya’ll feel me?), I found myself willing to spend more money for extra comfort, improved hotel facilities and the privacy of my own room and ensuite. Yet, I still had the desire to explore new places and this time, Russia and Scandinavia were on the list.

As a solo traveller, the 22-night Topdeck Russia Scandi round trip itinerary from Berlin with its cost, inclusions and free time was enough to make me rethink my bias and sign up for a coach tour. So, I booked! And here’s what I discovered…

I got bang for my buck 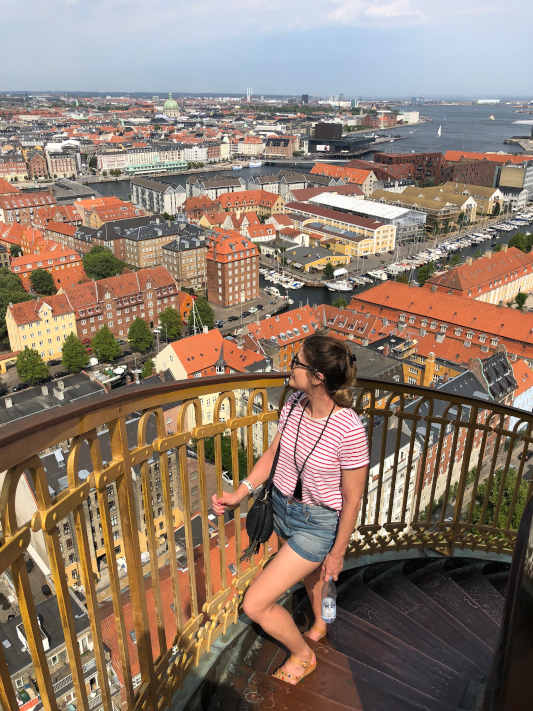 Upon recommendation, a few of us scaled the Church of our Saviour which offered amazing views of Copenhagen

Without a doubt, my money stretched further than on an independently booked holiday. All my accommodation was included with nine nights spent in funky hostels that were centrally located, 12 nights in hotels in twin-share rooms and one night on board a ferry from Stockholm to Tallinn. Every breakfast was included, as well as three lunches and 10 dinners, which were usually themed depending on where we had travelled that day.

We were treated to plenty of included experiences, too, such as driving tours in Berlin and Copenhagen and walking tours in Stockholm, Tallinn, Riga, Vilnius and Warsaw.

In Russia, we had a local guide, Tatiana (I mean, can you get anymore Russian?), who journeyed with us from St Petersburg, through Novgorod to Moscow and finally, Velikiye Luki. She shared her knowledge and passion for Russia while we had a driving tour of St Petersburg and Moscow, visited the Hermitage Museum, Moscow Kremlin, Moscow’s Metro and Lenin’s tomb.

That’s not to mention all the practical information, suggestions, tips and tricks shared with us every morning via our Facebook group. It included tips to save money, where to check out street art, foodie tips, when sunset will be, how to take the train to get to the best viewpoint, things to experience and even the weather. All of which proved to be invaluable. It became expected that after a big night out, photos would also surface via the Facebook group. Eek!

I had plenty of unique experiences 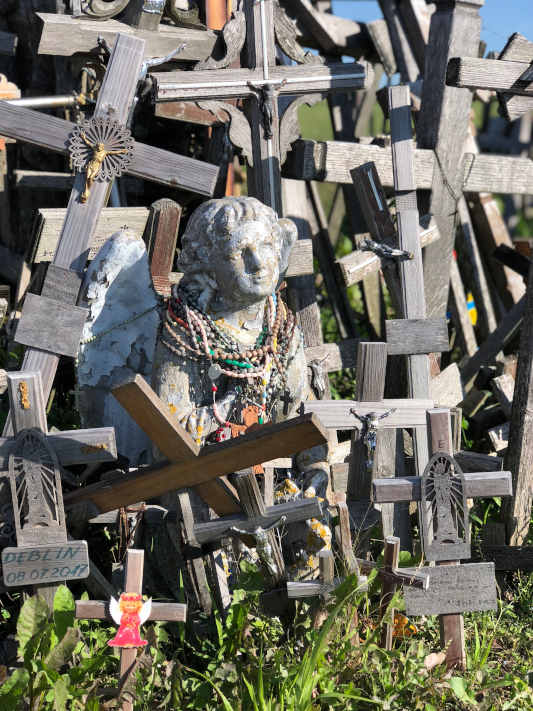 From a night out at Tradgarden in Stockholm, an outdoor summer club that included food stalls, a multi-level nightclub and live wrestling, to Copenhagen’s Reffen, the largest street food market in Scandinavia where I tried the classic Danish meal of smorgasbord (open sandwiches), I had many first-time experiences.

En route to Vilnius, Lithuania, we stopped at the Hill of Crosses, which was unlike any attraction I have visited. It was totally random, making it all the more cool. It’s believed the tradition of placing crosses at this site started in the 1800s as a sign of defiance during Soviet rule. Today, more than 100,000 metal and wooden crosses cover the small hill, located just off the highway.

I was able to opt into some pretty cool additional activities, such as seeing the ballet in Russia, learning about the history of Berlin during a Third Reich walking tour and visiting the Vasa Museum in Stockholm, home to the world’s best-preserved 17th-century ship, which capsized and sank on its maiden voyage.

I had the freedom to explore 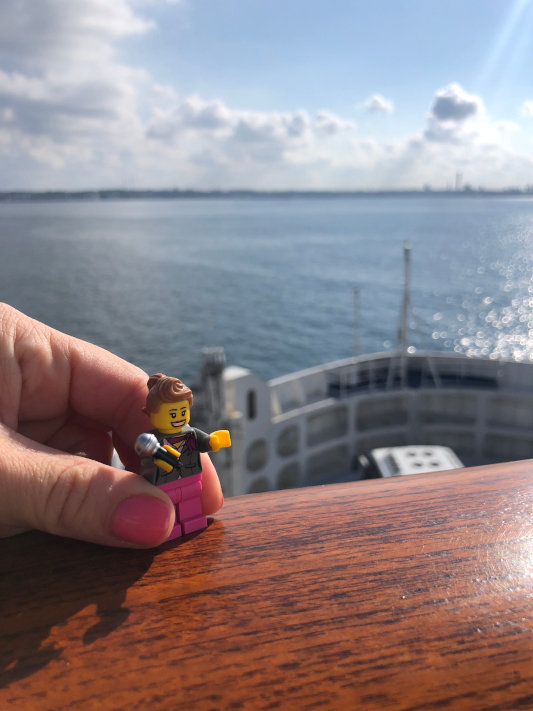 Building a Lego version of yourself in Denmark aka the land of Lego? Priceless!

Most mornings consisted of fuelling up at breakfast before heading out for the day. I often joined a small group of people who were interested in similar activities, such as seeing as much of Copenhagen as possible via a hop-on-hop-off bus and building a Lego version of myself before finally jumping on a virtual reality rollercoaster at Tivoli Gardens.

Thanks to a tip from my tour leader, I was able to drop my laundry to a drycleaner, which was nearby and cheap, before enjoying a free day in Riga. I splurged and headed to ESPA, the biggest 5-star spa in the Baltics, which has six whole floors dedicated to wellness. A couple of us met up later to visit the KGB museum and afterwards, as the sun set over the city, we enjoyed cocktails and panoramic views of Riga at the Skyline Bar. I ordered the ‘Double Denim’ cocktail, since my go-to outfit for the trip seemed to consist mostly of denim.

I ate so much deliciousness 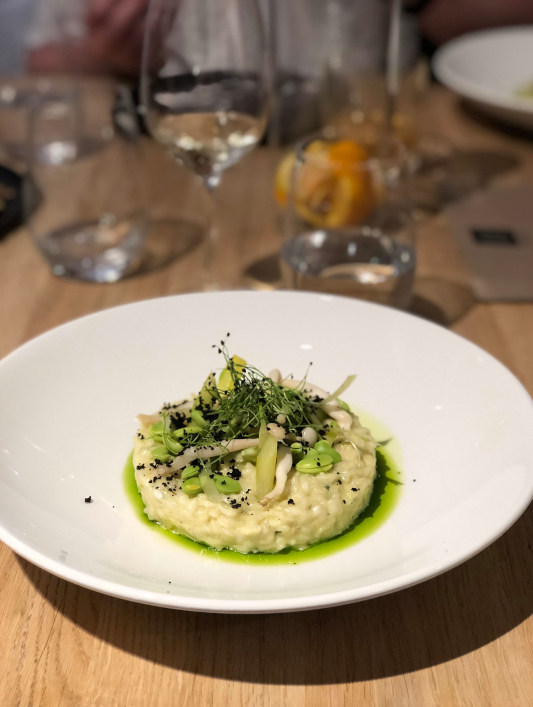 The main course at the hotel in Lithuania. Blew. My. Mind.

On my trip, I was lucky to score an amazing onboard chef, who had worked on the road for Topdeck for five years and boy, did she know her stuff! She treated us to a couple of lunches along the way and was able to recite the names of bars, restaurants and markets as soon as anyone asked: “Where’s good to eat?”. During a long drive day from Tallinn to Estonia, we had the fanciest packed lunch consisting of cured meats, stuffed baby peppers, cheese, potato salad, veggies and a dip that was even packed in a souvenir shot glass!

Along the way, a couple of hotels really stood out for their innovative food scene. While the hotels vary on trips, at the Corner Hotel in Lithuania, I was blown away by the modern European restaurant, Element. I ate a three-course meal with a haloumi and watermelon entree, risotto topped with truffle as a main and a seasonal dessert. Speaking of desserts, Hotel Saint Petersburg (unique name, right?) offered rooftop dining at Le Vue, where I was awed by the brightest dessert I have ever seen.

I met people with a passion 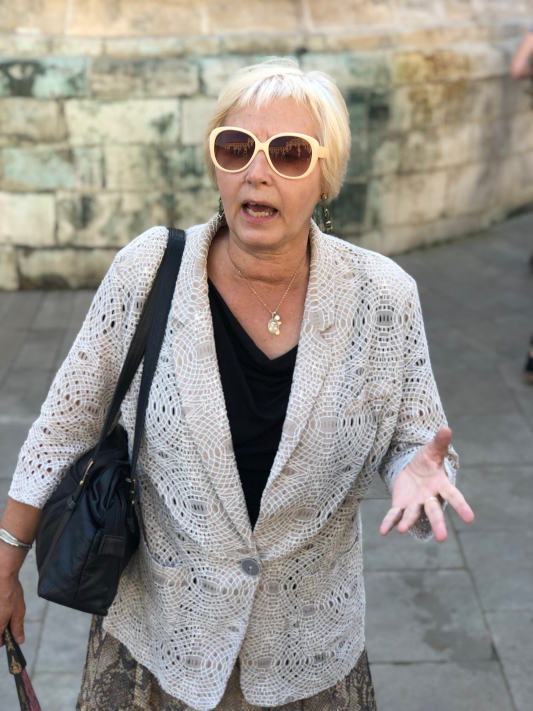 Our Russian guide Tatiana: passionate and full of life

My Topdeck trip leaders and local guides were not only knowledgeable but clearly passionate about travelling. They were able to give us an engaging history lesson both on and off the bus, answer hundreds of questions and make endless recommendations that turned out to be the highlights of the trip, such as  introducing us to Norwegian singer Ida Maria’s insanely catchy song “Scandilove”.

Our Russian guide, Tatiana, taught us a lot about the history of her country in the Moscow Metro, the best place to buy a babushka doll and gave us the rundown on many questionable statues. She was a passionate woman with a distinct personality: brutally honest and fierce.

And I made some pretty sweet friends 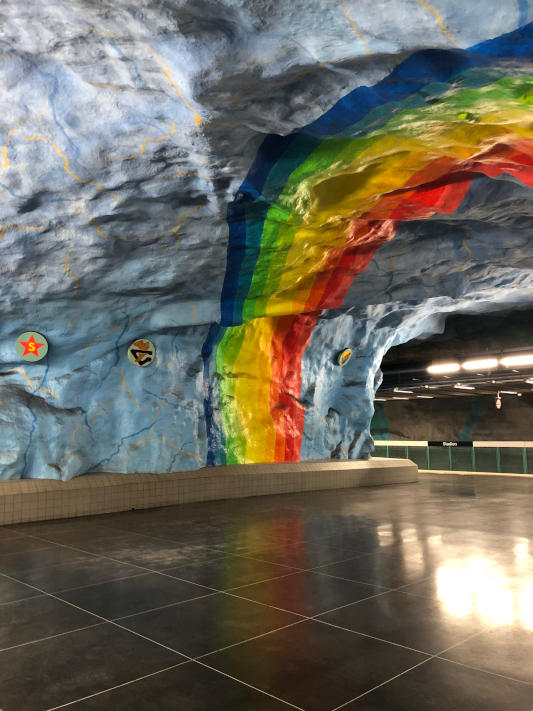 There’s something about exploring new cities, trying new foods and sharing a few drinks with a group of like-minded travellers. And when most of you are travelling solo, you become closer, faster.

Together, we shared vodka shots in Russia, walked in silence through the Memorial of the Murdered Jews of Europe in Berlin, got lost in the world’s first Ikea store in Sweden and nursed hangovers on the longer drive days, at times, even napping next to our partner, mouths wide open.

So, would I do a Topdeck tour again? Absolutely! Sure, you can put a price on accommodation and transport, but it was the unique experiences, perfect balance of free time and inclusions, learning from passionate expert guides and the fun bunch I got to travel with that was truly priceless.

Keen? Check out these sweet deals

Community and Content Coordinator Sheridan Murphy doesn’t just love travel, she lives it. If you want to work in Canada, volunteer in Fiji, stay with monks in Mount Emei, fly along the New York skyline, ride a camel in Abu Dhabi, trek the Great Wall of China, cruise the South Pacific or be kissed by a Greek in Corfu (on both cheeks)... be sure to follow along on Instagram @sheridanleemurphy.