Tacky Souvenirs That Are Probably Best Left In The Giftshop

Tacky Souvenirs That Are Probably Best Left In The Giftshop

Buried deep in the backs of all our cupboards are dusty relics of holidays. But not of our holidays. There's the dancing hula girl from Uncle Phil's trip to Hawaii, the bulky Texas belt buckle from your sister's road trip, the three-sizes-too-big 'I Heart NY' shirt from cousin Sam's Contiki.

There's no better way to say 'Wish you weren't here' than with a tacky souvenir. No souvenir is better than a lousy one, and these are some of the worst. 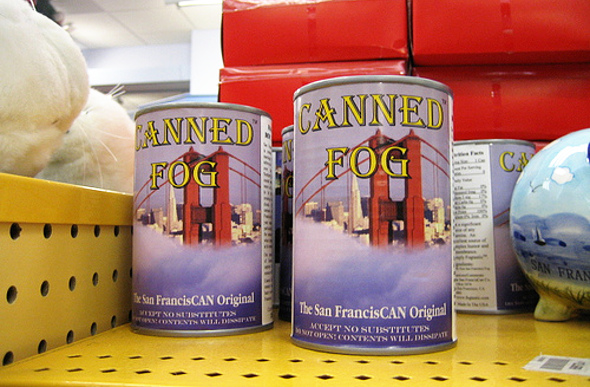 Don't open it or the 'fog' will escape! Then it will just be silly (Image: Flickr)

The company claims their product is 'the one and only canned fog' in San Francisco. Does that mean there are imitators? Could the real canned fog please stand up? Nothing says cheapskate friend quite like a can of air.
TACK FACTOR: 4/5 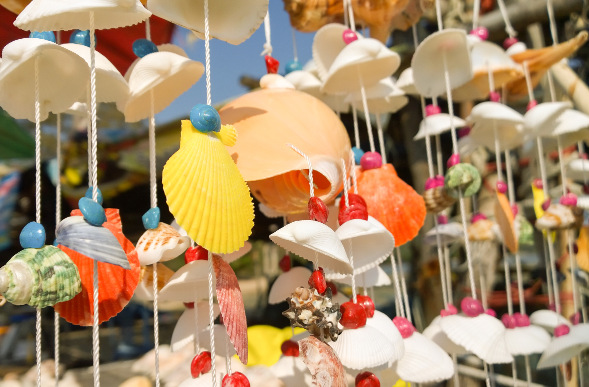 This shell curtain will go great in my lounge room... in the 1970s (Image: Getty) 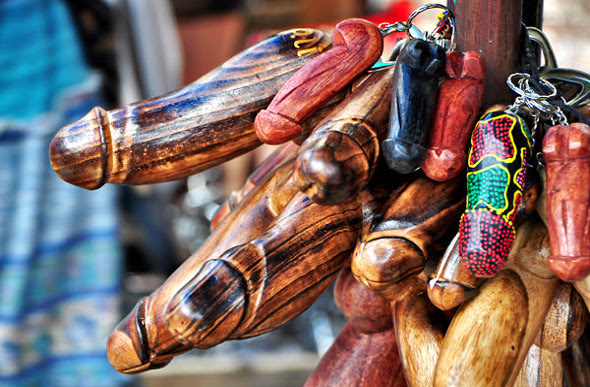 Maybe not a gift for the grandparents (Image: Celebrate Life Lah)

You can't go far in Bali without spotting a barrel of wangs. These well-endowed carvings are a symbol of good luck. Men even used to wear these charms around their necks to ward off bad spirits. Good luck convincing your mates to do the same.
TACK FACTOR: 3/5 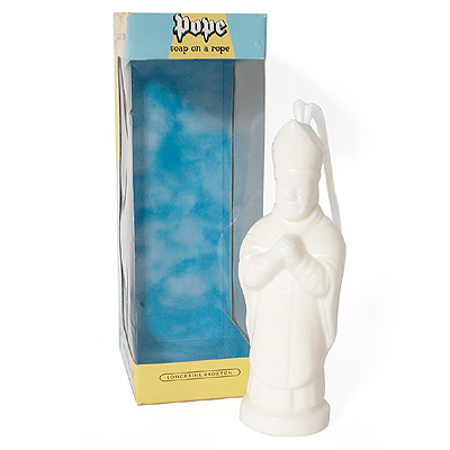 Wash your sins away with pope soap on a rope!

Pope soap on a rope

Bring your favourite pontiff into the shower with pope soap on a rope! Cleanse your body and your soul with this must-have Roman souvenir, made from all-holy ingredients. As they say, cleanliness is next to Godliness.
TACK FACTOR: 2/5 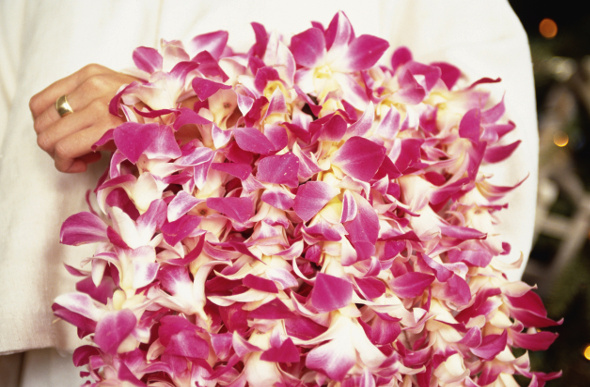 A fresh flower lei is a beautiful thing. It's natural, fragrant and delicate. A cheap, plastic knock-off is not. Keep the leis at bay. You can leave the foam frangipani hair clips and Hawaiian shirts on the Islands of Aloha while you're at it.
TACK FACTOR: 4/5 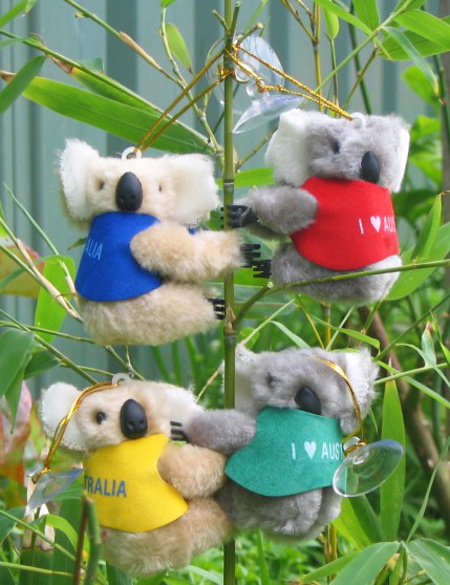 How much can a koala bear? (Image: Corporateoz)

You can never truly appreciate souvenirs from your own country – they're not exactly designed with you in mind – but clip-on koalas are among the worst of our exotic exports. Their squashed faces, jagged little paws, the fact that they come in packs of 12... it's all just a little bit sad.
TACK FACTOR: 2/5 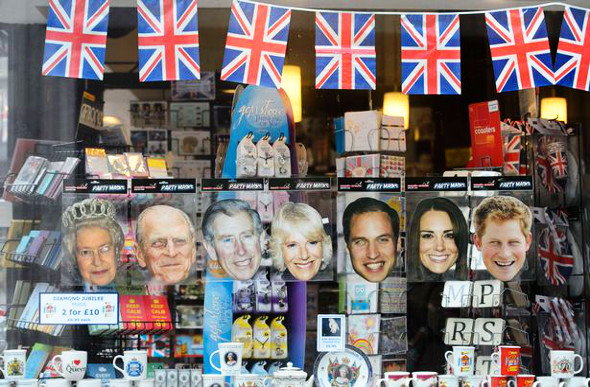 Will and Kate tying the knot in 2011, popping out a little prince in 2013, and now set to bestow the Commonwealth with another pint-sized royal has given discount gift shops in Britain a new lease on life. Royal family face masks and basically anything with Princess Diana on it are epically cringe-worthy.
TACK FACTOR: 3/5 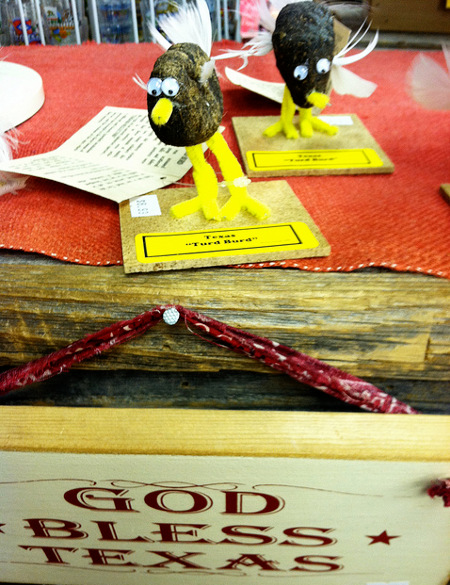 Talk about your crap souvenirs (couldn't resist). 'Turd Birds' were delightful oddities found primarily in gas stations across the States and made popular in the 1970s.

Montana Turd Birds, Texas Turd Birds, Kansas Turd Birds... they all have one thing in common: they're made of dried nuggets. They also have various poses and occupations, which are brought to life using pipe cleaners, googly eyes and toothpicks. Oh, the poosibilities...
TACK FACTOR: 3/5 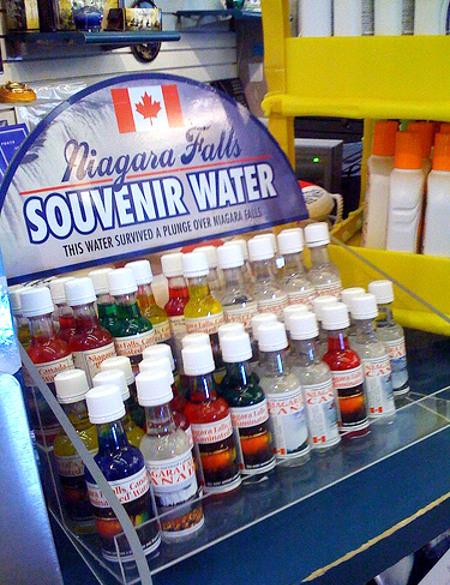 And you can't even drink it. What a waste. (Image: Flickr)

Some souvenirs are unashamedly gimmicky and tiny bottles of coloured Niagara Falls water are just that. What is anyone going to do with a small bottle of water and food colouring? For that amount of money you could send a nice postcard. Please send a postcard.
TACK FACTOR: 4/5 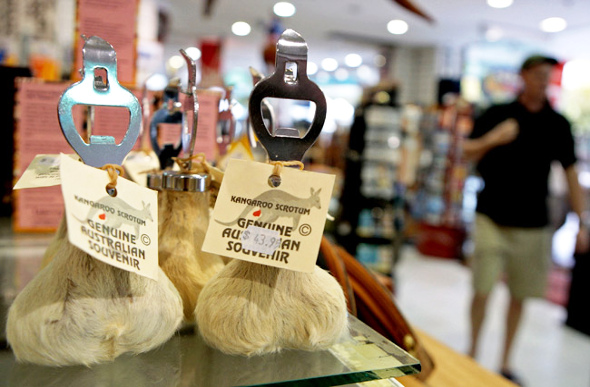 These tasteful gifts are prolific at night markets around Australia. A kangaroo scrotum bottle opener is the must-have accessory for any home entertainer, while kangaroo paw backscratchers are in equal poor taste. Rest assured, these products are made in accordance with National Parks & Wildlife Services regulations. That still doesn't make it okay.
TACK FACTOR: 5/5 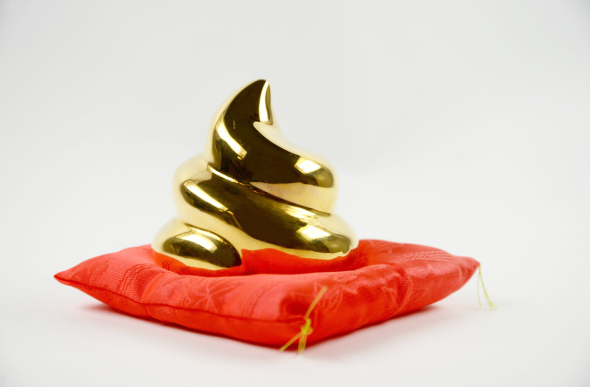 A souvenir worthy of a spot on the mantle piece (Image: Traveldreamscapes)

You've got to admire a country that can laugh at itself. In Japanese, the words for 'poop' and 'luck' are quite similar ('unko' and 'un' respectively). The Golden Poop (Kin no Unko) is not only a delightfully immature pun, it's also big business on the souvenir scene, raking in the Yen from giggly tourists. Good luck!
TACK FACTOR: 4/5