Casting your eyes to the sky to spot constellations has to be one of life’s greatest pleasures. However, city living isn’t exactly favourable to stargazing with an increasing amount of light pollution cloaking the bedazzled night sky. Fortunately Australia is a vast and sparsely populated nation with great expanses and plenty of remote corners to get your gaze on. 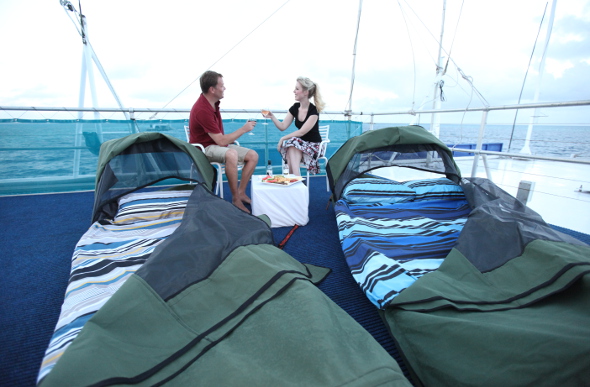 Settle into your swag for a night underneath the stars (image: Reef Sleep)

Astronomy isn’t exactly the first thing that comes to mind when you think of this tropical destination of brilliant blue seas and powdery alabaster sand. Cruise Whitsundays offers keen sunbathers and stargazers a chance to sleep under the sparkling sky, 40 nautical miles offshore on the Great Barrier Reef. Your accommodation is a waterproof swag on the permanently moored ‘Reefworld’ pontoon. You won’t be in the presence of an astronomer, but the surrounding seas illuminated by the glow of the moon and blanket of stars make for a truly once-in-a- lifetime experience, with sunrise to look forward to in the morning too. Snorkel by day, stargaze by night; life’s pretty good in the Whitsundays. 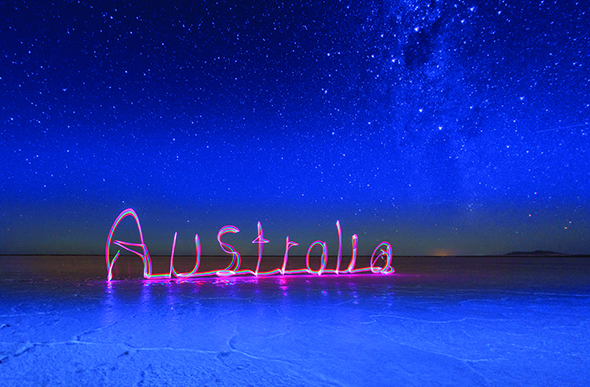 Lake Eyre in South Australia is considered one of the state’s darkest Outback spots, making it a prime location for stargazing, with no light pollution and clear skies. You’ll be able to witness the stars and planets like never before, even without a guide. Satellites and shooting stars are common sights; in fact, in January this year, researchers from Curtin University tracked and ultimately retrieved a meteorite lodged in the lake’s solid salt crust, dated at 4.5 billion years old! While the rainfall of the Kati Thanda Lake Eyre basin is erratic, plan your trip wisely and you’ll witness the celestial splendour reflected in the glass-like surface of this great lake. 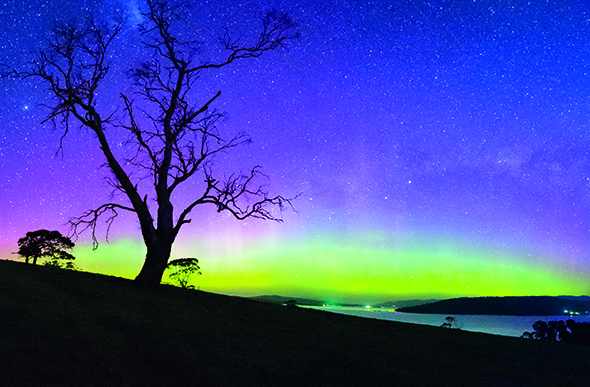 Craning your neck at inky black skies won’t just reward you with a smatter of stars. Arguably one of the best natural shows on Earth is the otherworldly phenomenon of Aurora borealis. Head south to the Apple Isle to see the Southern Hemisphere’s answer to these vivid solar flares: Aurora australis, which you can view pretty much all year round. The dancing beams are best viewed in remote locations, including Cockle Creek on Tassie’s southern tip, Dodges Ferry outside Hobart, or Swansea. If you don’t catch these pastel lights, you’ll still be rewarded with a sparkling sky. Isolated Bruny Island is one of Tassie’s darkest spots, while coastal Hope Beach is free from light pollution and obstructions. 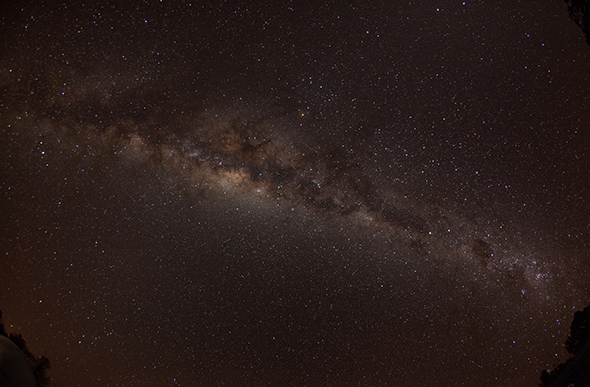 The Milky Way as seen from Coonabarabran (image: Getty)

This remote New South Wales town is considered the ‘Astronomy Capital of Australia’, a crown it so rightly wears with thanks to its pristine air, high altitude and low humidity. The town, known simply as ‘Coona’, is nestled in the Warrumbungles, one of the state’s most accessible national parks, amid ancient volcanic remnants and bushwalking tracks. Coona is home to Siding Springs Observatory, one of Australia’s most recognised astronomical research facilities with two of the nation’s largest telescopes. On the first weekend in October, Siding Spring Observatory hosts Star Fest celebration, an annual celestial festival complete with astronomer talks and a chance to look through the telescopes. 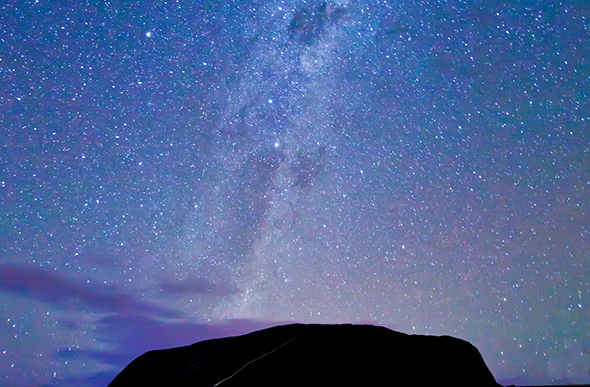 Uluru-Kata Tjuta National Park grants keen stargazers the opportunity to see the Southern Hemisphere sky at its most brilliant, especially during the cooler months when there is little heat haze in the atmosphere. During this time the Milky Way’s dusty band stretches across each horizon – a sight few visitors get to experience. With several options for stargazing in Uluru, the most popular is the iconic Sounds of Silence dinner. The evening begins with canapés on the dunes, followed by a decadent meal and star talk, which touches on scientific and cultural aspects of the night sky. For an in-depth astronomy experience, see the stars from two Celestron CPC 9-inch telescopes during an Outback Sky Journey.

You’ll be a backyard astronomer in no time with these stargazing tips.

Light pollution is no friend to astronomy. The best time for seeing the stars is when the weather is cool and dry – away from city lights. In Southeast Queensland, prime star-spotting time is winter, while further south, the skies are clearer in the warmer months.

“The moon plays a large part in stargazing as it allows fainter objects to be seen from a dark location,” says Tony Suma-Hawes from the Brisbane Astronomical Society.

There’s an app for that

What was once the domain of star charts can now be downloaded in just a few taps on your phone. The SkyView app works by simply pointing your mobile at the sky to identify constellations, stars, planets and more!

Enhance your experience by linking up with an astronomy society. You’ll gain expert advice and insights from likeminded folk, as well as get the chance to take a closer peek at the universe through a telescope.