In this episode, Flight Centre travel consultant Greer Gardiner takes on the thrilling city of Las Vegas and the stunning desert landscapes of Nevada. With the help of local guide and Flight Centre consultant Kelly, the pair's adventures include the famous Las Vegas sign, the mob museum, a helicopter flight over the Grand Canyon and so much more.

11am - Welcome to Fabulous Las Vegas!

It’s mid-morning and Greer has landed in Las Vegas! After collecting her car at the airport (a white convertible of course!), she meets old friend Kelly King at the iconic ‘Welcome’ sign just outside of the city. Kelly is a fellow Flight Centre consultant and Nevada expert. Because the clock is already ticking, Kelly decides to take Greer straight to the Mob Museum to learn about Las Vegas through its gangster and mob influences. Head of content at the museum, Geoff, who is an expert of the subject, and has written books on the city and its original mobsters, shows the girls through three floors of exhibits.

Now because they are in the museum mood, Kelly and Greer head to another highlight, the Neon Museum Downtown. Museum spokesperson Dawn Merrit shows the girls through the outdoor boneyard as she explains that the museum is dedicated to the city’s most iconic art form – neon signage!

The girls drive up to the Venetian, drop their car with the valet and head inside for lunch, Greer is hungry! They are heading into Black Tap, a craft burger and beer joint, famous for its milkshakes. The restaurant opened recently, and their shakes are one of the most instagrammed shakes in the country! Covered in whole brownies, marshmallows, M&Ms and so much more, the girls order big going for both a burger and of course a giant shake to wash them down. They dig in, and get stuck into the artful drinks.

The girls walk off lunch with a stroll through the stunning ‘The Shoppes’ in the Venetian, taking in the Italian setting, complete with handsome Italian gondola captains taking visitors for leisurely trips down the indoor canals. Greer is pretty impressed so far!

It’s now time for some adventure! The girls have made their way to Maverick Helicopters at McCarran Airport where they meet helicopter pilot Wyatt, for the tour unlike any other! They are about to be speed through the air, above the desserts, Lake Mead, Hover damn and Boulder City, landing into the Grand Canyon for sunset. Here they take in the incredible surroundings, the wildlife and the peace, before being whipped back over the bright lights of the Strip.

They’re back on solid ground but the day isn’t over just yet! Kelly has a few more things in store for Greer before they hit the hay. First it is dinner, and tonight that means Italian – Greer’s favourite. One of the oldest Restaurants in New York has a location in Las Vegas - Rao’s, at Caesar’s Palace. Voted one of the best in the city, its New York counterpart has been operating since 1896! And Vegas Rao’s offers guests some of the same time-honoured staples including perfectly cooked Uncle Vincent’s Lemon Chicken and mouth-watering Rao’s Meatballs. The classic veal chop is pan-seared and topped with a medley of hot and sweet cherry peppers.

When in Las Vegas, catching a show is crucial, and Kelly has lined up tickets to one of the most popular on the strip – O, the incredible aquatic show by Cirque du Soleil, hosted at the Bellagio. O is named after water ‘eau’ in French.

Kelly has a little surprise for Greer though… she has organised a post-show interview with two of the performers backstage in the VIP suite. What a way to do it! Greer and Kelly sit down with Terry and Yulia, and learn about how they both got into Cirque, their roles in O (Terry plays the comical relief, and Yulia the ballerina/dancer character who links the characters altogether).

The girls enjoy a sneaky nightcap at this beautifully decorated cocktail bar, before heading back to get some zzz’s! It has been a big day.

7am – The Venetian Hotel

The girls enjoy a morning splash in the Venetian pools - Greer needs some Vitamin D and some sun! Kelly watches on from the lilo as she sips on a breakfast juice.

After spending the past day eating, drinking and sightseeing, Greer and Kelly are off to discover a bit of the surrounding areas. 90 minutes from the strip is Valley of Fire, and John from Pink Jeep is their knowledgeable guide for the morning. He points out a few famous movies this place has featured in, some incredible scenery that changes rapidly as they drive, and some stunning rock formations. They finish up their morning with a spot of lunch on a rock overlooking some rusty red sandstone formations, lunch with a view for sure.

Kelly has a few things to show Greer as they continue to head north of Las Vegas, some quirky stops on the Free Range Art Highway towards Tonopah. They stop at two ghost towns, Goldfield and Rhyolitte, both home to unique art museums.

Arriving as the sun is setting, the girls are here to visit yet another spirited site! The historic Mizpah Hotel was named after the nearby Mizpah Mine and was the social hub of Tonopah in its heyday. With themed rooms dating back to the early 1900’s, the hotel’s most famous room is ‘Lady in Red’. During a tour by hotel manager Tracy, the girls learn that the Lady in Red room is home to the hotel’s most famous ghost, a lady of the night who was murdered on the 5th floor, and whose presence has been felt all over the hotel by staff and guests. They also check out the basement, allegedly haunted by two ex-miners who were shot in the building when it was a bank, which they were robbing at the time.

Setting off along the ET Highway, Kelly starts explaining a few fun Nevada facts to Greer as they drive, along the lines of aliens, UFO sightings, a top-secret government testing facility, moon-like terrain. Is it any wonder State Route 375 gained notoriety as the “Extra-terrestrial Highway?”. They take in few quirky sights along this highway as they head to Cathedral Gorge.

This stretch of road runs parallel and extremely close to the borders of the Nellis Air Force Range’s top-secret Area 51, and Kelly explains that many who have travelled this section have claimed to have seen unidentified flying objects and strange activity in the area, blaming it on alien activity. The girls keep their eyes peeled on the drive, but only spot alien signage and small businesses.

Arriving at Cathedral Gorge, the girls do a beautiful walk through the canyons. It is a geologic preserve featuring a dramatic landscape of eroded soft bentonite clay covering more than 1,600 acres in Lincoln County, Nevada. Here Greer reflects on their incredible, action-packed 48 hours in Nevada – the glamour and neon lights, the Grand Canyon helicopter experience, and the sharp contrasts of this amazing state!

NEVADA DEALS AS SEEN ON TV 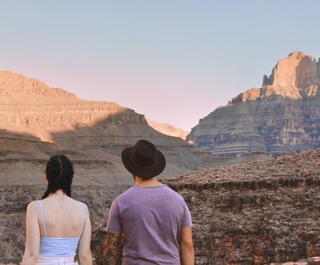 Top Things To Do In Las Vegas, Nevada
22 October 2019
It’s no surprise that Las Vegas has been dubbed the Entertainment Capital of the World. A few minutes in the city and you’ll feel the energy pulsing
Read Time: 8.6 mins
North America

Plug Into Nevada’s Electric Highway
20 May 2019
With the neon lights of Las Vegas in your rear-view mirror, road trippers can now put pedal to the metal along the Nevada Electric Highway (NEH).
Read Time: 2.2 mins
North America

Heading to Vegas? 11 New Las Vegas Attractions Not To Miss
4 March 2019
Las Vegas , much like the revolving doors of the hotels dotted along the strip, is constantly ushering in the new and flushing out the old. 2019
Read Time: 4.7 mins
North America

How To Have A Kid-Friendly Holiday In & Around California
21 December 2018
Thinking of jetting away to the USA? The West Coast is now more accessible than ever by air, and when you fly with Air New Zealand to Los Angeles,
Read Time: 6.8 mins