Who doesn't love saving a bit of money on accommodation and still experiencing a comfortable stay? More money for attractions, fancy restaurants and tours.

Budget accommodation can often be a difficult element of travel to judge, so we've made it easier, providing 10 of the best budget stays in Penang.

The tasteful 200-year-old mansion of 23 Love Lane is an oasis of calm right in the heart of bustling George Town. Not only has the architecture been perfectly preserved, but the owners have furnished the property with a mix of eye-catching modern artworks and vintage 1930’s furniture. Rooms are bright and airy, several looking out on a lush tropical garden. 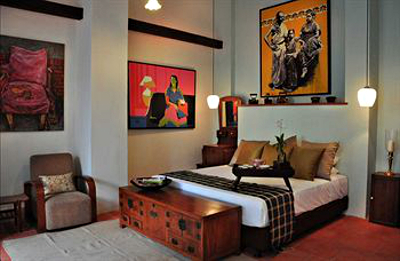 A room at the 23 Love Lane (Quickbeds)

Prices are more expensive than the budget norm, but this is worth the expense, as for the extra dollars you get a veranda and a library to relax in, and recently a restaurant has been added next door, SteakFrites@23, where breakfast and afternoon tea are served for hotel guests.

Lumut Lane was historically where traders stayed when they passed through Penang, so the owners of Spices, an architect and his landscape designer wife, used this as inspiration for the bright north-African decor that makes this property stand out.

The colourful entrance leads into the breakfast lounge on one side, where complimentary afternoon tea is also served, and a cool reading room on the other, while at the back there is an interior garden dominated by an ancient tree that grows right up through the middle of the house.

This is the newest boutique B&B on the block, right in the middle of Penang’s bustling, psychedelic Little India neighbourhood. An imposing white building dating to 1895, this was originally one of Malaysia’s most important Chinese Medicine Halls, preparing traditional potions and exporting them all over south-east Asia.

The new owners spent two years renovating 17 sleek rooms above the ground floor, all decorated with period furniture, some with inviting wooden bathtubs. 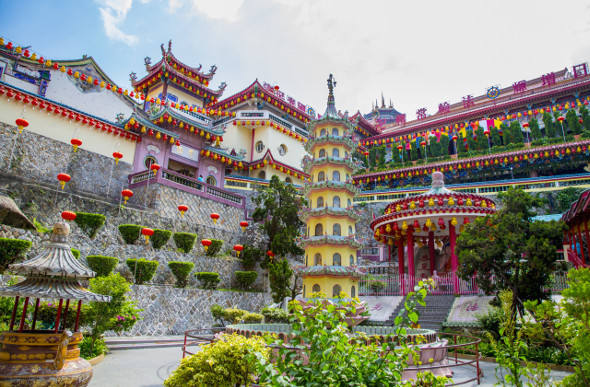 The downstairs has been transformed into a bistro and bar, with a section set aside for a mini museum dedicated to Chinese medicine, while a Chinese pharmacist has set up shop, ensuring that the heritage of the building continues.

Cintra stretches across four 1920’s shophouses that used to house a Chinese restaurant and barber shop. Nostalgia for the 1950s and 60s is the theme here, with the hotel’s bar and bistro decorated with black and white photos of Malay movie stars.

Furnishings in the spacious bedrooms are more art deco. The big attraction is the series of interior courtyards filled with tropical plants and armchairs, perfect for relaxing with a book – but watch out if it starts raining as none of these traditional courtyards have roofs. 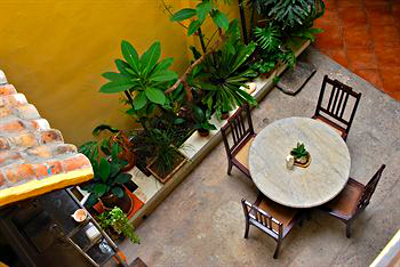 Breakfast is copious, and you have the choice between a western-style fry-up and local favourites such as nasi lemak – coconut-steamed rice with crispy fried anchovies – and roti canai, a delicious Indian bread dipped into a spicy curry. Rooms looking out on the street can be noisy at night, especially as Lebuh Cintra is a favourite after-dark haunt.

This B&B is just outside George Town’s Unesco heritage zone, but there is still an authentic Chinatown feel, and a free bus service from the nearby Komtar shopping mall takes you quickly into the centre. From the street, this looks like a classic Chinese mansion – with an ornate facade and tiled entrance – but while the rooms in the main building are decorated in traditional Peranakan style with four-poster beds, the Mews building at the back is actually a new construction.

Rooms are minimalist, bright white, with funky 1940’s furniture. And parallel with the Mews is a wonderfully-inviting pool, a big plus to come back to when you’ve spent a day sightseeing in humid 30°C temperatures. Guests also have the use of a roomy colonial-style lounge and a simple all-day dining cafe.

Only 15 minutes from the town centre, Palanquinn offers seven elegant rooms dotted across three mansions that line what locals call Bangkok Lane. These stately homes were built in an exotic Thai style in 1927 for wealthy expats from Bangkok, right next to Penang’s main Thai Buddhist temple.

This smart suburb goes by the unflattering name of Pulau Tiku – Rat Island – and is two minutes’ walk from Gurney Drive, Penang’s waterside promenade, which is home to some of the island’s best street food and a teeming night market.

There is no breakfast included, but just nearby are a host of traditional coffee shops with dozens of local morning specialities, from dim sum to banana leaf curry.

And the budget conscious don't have to live on peanuts. Delicious Malaysian Food On A Budget

Bring your appetite to Penang. Wishing For A Bigger Stomach In Penang

Tofu is different from other hostels in Penang, attracting guests who range from chefs looking for street-food inspiration to architects and artists. 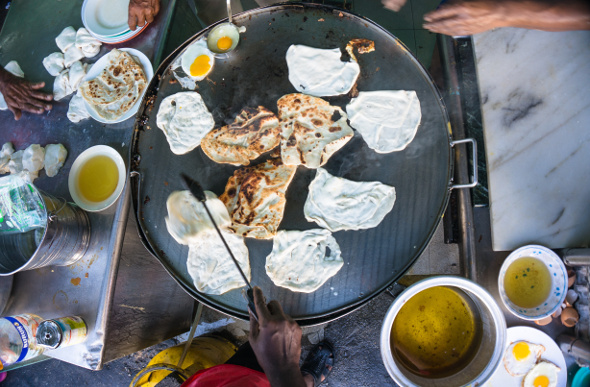 Breakfast can be a feast in Penang (Getty)

Recently opened by the bubbly Lucas and Joyce, intrepid hostel-travellers themselves, who wanted to incorporate every innovation they had discovered to create the perfect hostel in their native Penang.

On the plus side, this means comfy sleeping pods that even include a double bed for couples who are fed up with sleeping in separate dorms, free bikes for anyone staying a minimum of three days, organic food, and a homemade George Town map featuring the couple’s insider addresses for eating, shopping and sightseeing. But bear in mind that this is not really a place for partygoers as there is strict curfew at 12.30am; you don’t even get your own key.

Lebuh Muntri is George Town’s hostel hotspot, with half the street occupied by budget digs. Moontree 47 is different: a quirky, reasonably-priced guesthouse run by the eccentric Dickie Tan, a one-time graphic designer, who now devotes his time to his eclectic collection of Penang memorabilia, and personally looking after the B&B guests.

This house was built in the 1920s and used to be an incense workshop, selling joss sticks for use in temples. Now Dickie lets out six rooms and runs the rambling downstairs as an art gallery and cafe. Rooms are spartan but comfortable, while the long, narrow ground floor stretches from a lounge and salon into open inner courtyards with lush tropical plants and Dickie’s host of cats.

From the day it opened, Syok – the name means “cool’ in Malay – has become the hippest backpacker address in Penang, with eight dorms, each with eight bunk beds. The owners have transformed an ancient shoe store, perfectly located on the corner of George Town’s main drag, Chulia Street, into a stylish hostel, decorated with striking modern paintings created by young local artists.

Don’t miss the huge blackboard installation in the lounge bar entitled “Before I Die”, where travellers fill in their dreams before it gets wiped clean each week. There are two tiny double rooms whose guests have to share the dorm bathroom and toilets.

Penang’s most innovative hotelier, Christopher Ong, has brought back to life what was once the derelict stables of a grand Chinese mansion, transforming it into nine suites that have become a firm favourite with flashpacker travellers visiting George Town.

Again, this is slightly more expensive that others on this list. However, its decor is a cut above: the suites featuring minimalist but stylish decor, with antique marble-topped tables, sofas and four-poster beds, with complimentary fruits and Chinese tea in a kitsch thermos flask.

The funky Mews Cafe, where breakfast is served, is a popular hangout for Penangites – open for lunch and dinner – and is renowned for its delicious desserts and creative cocktails.

This article was written by John Brunton from The Guardian and was legally licensed through the NewsCred publisher network.

John Brunton is a regular contributor to The Guardian, writing and taking photographs on travel, food and wine. Based in Paris and Venice, as well as travelling regularly in South East Asia he blogs at thewinetattoo.com and posts on Twitter @thewinetattoo
more articles from this author