101 Things To Do In Australia

101 Things To Do In Australia

We love a sunburnt country… and a jewelled sea, lush rainforest and the odd unique iconic rock formation. In fact, we found 101 things to do in Australia, across every state and territory. How many have you ticked off your list? 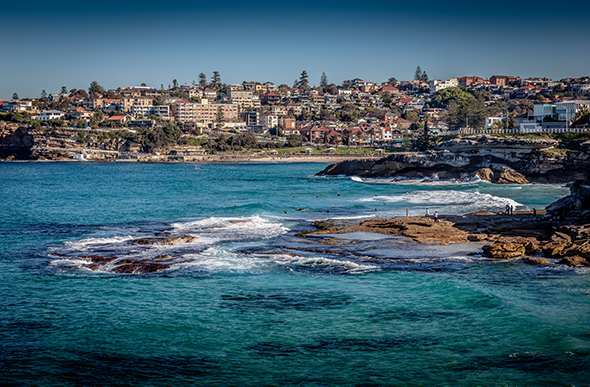 Sydney's iconic walk is a must when visiting the eastern suburbs (image: Getty)

1. Do the Bondi to Coogee coastal walk in Sydney.

3. Enjoy an evening under the stars overlooking Uluru at the Sounds of Silence dinner.

4. Don a snorkel and plunge into the colourful underwater world of the Great Barrier Reef.

5. Climb to the top of the Sydney Harbour Bridge.

6. Venture sky-high i101 n a glass-bottom cable car along the Skyrail Rainforest Cableway to Kuranda.

7. Cheer on your favourite AFL team at the MCG.

8. Cruise along the Great Ocean Road in Victoria.

9. Watch the world’s best surfers carve up the waves at Snapper Rocks during the Quiksilver and Roxy Pro.

10. Swim with the dolphins in Monkey Mia.

11. Dive into a medley of multicultural flavours at Darwin’s Mindil Beach Sunset Market.

12. Have a Sunday sesh at Fremantle’s Little Creatures brewery.

13. Head to the largest music festival in Australia, the Tamworth Country Music Festival.

14. Explore the boundary-pushing artworks and curiosities of Mona (the Museum of Old and New Art) in Tasmania.

15. Camp and enjoy the tunes at Splendour in the Grass.

16. Check out the views from the Q1 Observatory Deck in Surfers Paradise. 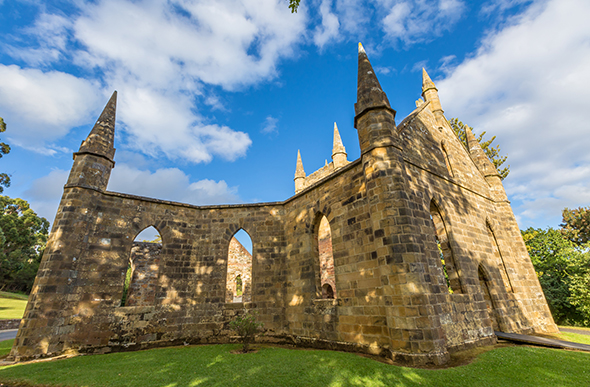 17. Linger over a tasting menu at Australia’s best restaurant, Attica, in Melbourne.

18. See the penguins waddling back to shore on Phillip Island.

19. Embark on a late-night ghost tour in Port Arthur.

20. Cross the country on The Ghan.

21. Have some fish and chips by the beach.

22. See the crimson glow of Uluru at sunrise.

23. Put on your Blues or Maroons jersey at a State of Origin game.

24. Visit Adelaide during one of its many festivals, such as the Adelaide Fringe and WOMADelaide.

26. Climb to the lofty heights of Mount Warning in northern NSW.

27. Stroll the boutiques of Hastings Street in Noosa.

28. Wander through the Daintree Rainforest.

29. Don your cowboy boots for the Gympie Music Muster.

30. Get sky-high on the Giant Drop at Dreamworld.

31. Eat a banana split at the Big Banana in Coffs Harbour.

32. Watch the fireworks light up the sky over Sydney Harbour for New Year’s Eve. 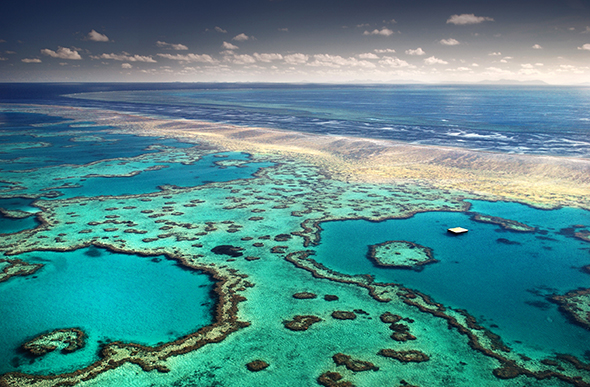 The Great Barrier Reef is the jewel in Queensland's crown (image: Getty)

33. Swirl and sip your way through the cellar doors of the Barossa Valley.

35. Watch the sunset at the Nightcliff foreshore in Darwin.

36. Slice up some fresh powder at Thredbo or Perisher during ski season.

37. Soak up the sun on a Whitsundays cruise.

38. Hit the sand on a 4WD adventure on Fraser Island.

39. Set up camp in the stark wilderness of Lake Eyre National Park.

42. See the Hunter Valley landscape unfold from above in a hot air balloon.

44. Take in a theatre show at Brisbane’s QPAC.

45. Strap on your hiking boots for the Rim Walk at Kings Canyon.

46. Muster up the family for a day at the Sydney Royal Easter Show.

47. Sleep among the animals at Taronga Zoo’s Roar and Snore experience. 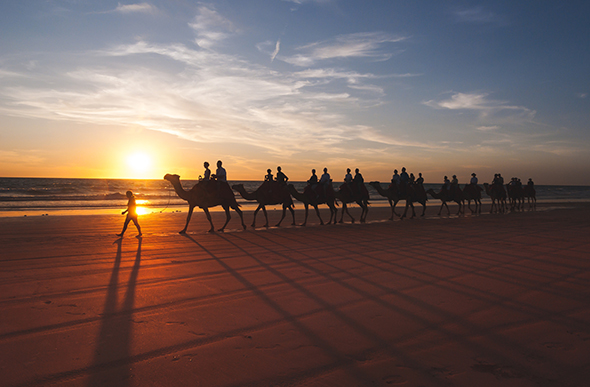 Explore part of Australia's final frontier on a camel's back in Broome (image: Getty)

There's no place like home: Australia, a land with no equal

The best of the best in Australia

51. Get face-to-face with a crocodile on a jumping croc cruise.

52. Find your Zen with a stand-up paddleboard yoga class.

55. Enjoy a sunset camel ride along Cable Beach in Broome.

56. Sample your way around Eat Street Markets in Brisbane.

57. Marvel at the rotating roster of exhibitions at the Queensland Gallery of Modern Art (GOMA).

58. Grab a flat white and enjoy an alfresco brunch along Fremantle’s Cappuccino Strip.

59. Go whale watching between June and October at the Great Australian Bight.

60. Walk among the giant beehive-shaped towers in the Bungle Bungle Range.

61. Soak up the ocean views at the Cape Byron Lighthouse, Australia’s most easterly point.

62. Delve into Australia’s convict past at World Heritage-listed Kingston on Norfolk Island.

63. Accelerate from zero to 100 kilometres per hour in just two seconds on the Superman Escape ride at Movieworld.

64. Slow down the pace with a sun-soaked holiday on Rottnest Island. 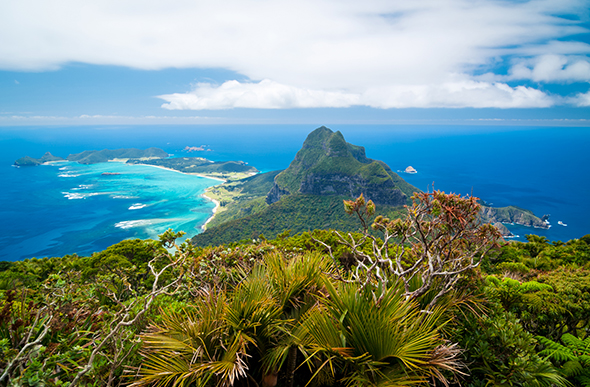 It's just you (and only 399 other people) and the sea on Lord Howe Island (image: Getty)

65. See democracy in action during Question Time in the House of Representatives or Senate in Canberra.

66. View the eye-popping spectacle of sunflowers in summer along the Sunflower Route in the Granite Belt region.

67. Stand among the giant karri trees in Boranup Karri Forest near Margaret River.

69. Feel the serenity on Lord Howe Island where you’ll be one of only 400 people who can visit at any time.

70. Soak your way into a state of relaxation at the Peninsula Hot Springs.

71. Call into cellar doors along the Tamar Valley Wine Route.

72. Chill out at Cottesloe Beach.

73. Stay in an underground hotel in Coober Pedy.

74. Drive on the stretch of Stuart Highway that has no speed limit.

75. Chase the sun along the Capricorn Coast.

76. Join an adventure through the magnificent Kakadu National Park.

78. Hop aboard an unforgettable eco cruise around Tasman Island.

79. Grab some cardboard and toboggan down the sand dunes on Moreton Island.

80. View the centuries-old rock art at five shelters in the Grampians. 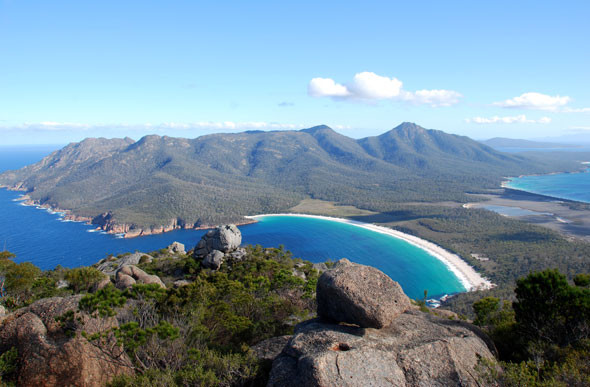 On top of the world in Freycinet National Park (image: Getty)

81. Fly through their air at the high ropes course in Mt Tamborine.

82. Try your luck at fishing for barramundi in Arnhem Land.

83. Fossick for gold in Warwick.

84. Walk through the desert landscape of the Pinnacles.

85. Scuba dive in the reefs off Port Douglas.

86. Admire the views of Wineglass Bay from a lookout in Freycinet National Park.

87. Have a houseboat holiday on the Murray River.

89. Explore the grungy laneways of Melbourne.

90. Marvel at the Staircase to the Moon natural phenomenon in Broome.

91. Head off on a bush food walk in the Northern Territory.

93. Immerse yourself in the vibrant culture of the Tiwi Islands, nicknamed the ‘Island of Smiles’.

94. Dress up in your finest fashions for the Melbourne Cup Carnival at Flemington.

95. Take flight over the Flinders Ranges. 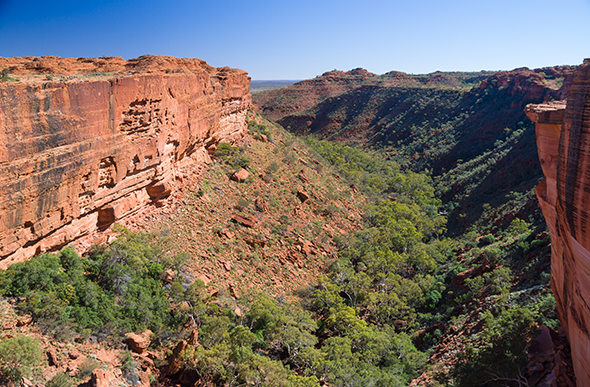 The Kings Canyon Rim Walk is one of Australia's greatest treks (image: Getty)

99. Feel the thunder of the mighty Jim Jim Falls on a cruise or scenic flight.