Amsterdam may be renowned for its cosmopolitan air and vibrant city streets but the largest and most liberal city in The Netherlands has a more traditional side. Dug in the 17th century under the auspices of urban planners, Amsterdam is home to some of the most picturesque canals in the world. These pretty urban waterways make the Dutch capital one of the most scenic cities in Europe and we've compiled a guide to help you navigate their meandering ways. 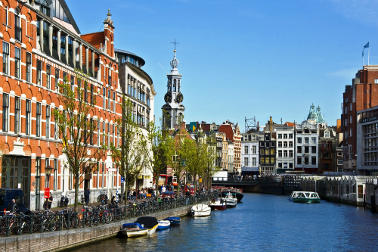 The Singel
One of Amsterdam's most famous canals, the Singel lies close to the historic city centre and was originally conceived as a defensive moat built during the Middle Ages. The inner-most of Amsterdam's many canals, the Singel is also one of the most picturesque. Situated between the Koningsplein and Muntplein squares is Amsterdam's famous flower market, the Bloemenmarkt, which is housed on floating boats in the canal. Don't miss the chance to view the Singel at night when the cafes and restaurants lining the water's edge light up the surrounding area with their luminous lamps and lanterns.

Zwanenbergwal
With canals as beautiful as the Zwanenbergwal, it's little wonder Amsterdam has proved a prominent breeding ground for artists. By far the city's most famous artist is the renowned Dutch master Rembrandt, who lived for 20 years on Jodenbreestraat just off the canal in a house which is now the Rembrandthuis museum. Many more artists have lived along the canal during its long history, while the city's opera house is located stands at the intersection of the Zwanenburgwal and the Amstel river.

Herengracht
Known in English as the Patricians' Canal or Lord's Canal, Herengracht is the first of the three major planned canals which ring the inner city in a concentric pattern. Most famous for the so-called 'Golden Bend,' where many of Amsterdam's well-to-do built stunning double-wide mansions with classic facades, Herengracht attracts hordes of tourists keen to take in the city's sights on one of Amsterdam's famous canal boat tours. Most of the mansions were long ago converted into private offices but don't let that stop you from dreaming what life was once like as part of Amsterdam's upper class.

Reguliersgracht
One of Amsterdam's smaller canals lying to the east of the city centre, what makes Reguliersgracht unique are the series of seven scenic bridges which arch across its shores. Situated in a predominantly residential area, what Reguliersgracht lacks in attractions it more than makes up for in scenery, with the canal typical of the many tucked-away waterways which link Amsterdam's larger and more tourist-oriented canals.

Brouwersgracht
Once lined with breweries, the aptly named 'brewer's canal' meanders through the northern fringes of Amsterdam and links with several other major canals. Wide enough for houseboats to line its once industrial shores, Brouwersgracht is today home to numerous converted warehouses which are now some of the city's most sought-after apartments. Regarded by many locals as one of the finest canals in Amsterdam, a boat trip down Brouwersgracht offers the perfect mix of scenic sights, architectural splendour and a glimpse into the city's long industrial history.