7 Amazing Things You Can Do At Atlantis, The Palm Dubai

7 Amazing Things You Can Do At Atlantis, The Palm Dubai

Commanding 44 hectares on the crescent of a palm-shaped island is a coral coloured 1,500-room hotel complete with a lagoon and ruins that replicate the lost city of Atlantis. Sounds like fantasy, doesn't it? But the fact that this eye-popping hotel is in Dubai, where anything is possible, should explain a few things.

Like many of Dubai's mega hotels, Atlantis, The Palm doesn't fall short in spoiling its lucky guests with a dizzying blend of whimsy, grandeur and plenty of underwater themed fun. As much a theme park as it is a hotel, here are the most amazing things you can do there.

1. Shop Til You Drop

You really don't need to leave the hotel for anything, not even do some credit card damage. From Australian Paspaley pearls to collectable artwork, most of your retail needs are neatly stored under the one roof. There's even a gold ATM. No, not a gold-hued ATM, but an ATM that dispenses actual gold. Only in Dubai...

2. Sleep In A Signature Suite

Sure, you may think if you've seen one hotel room you've seen them all, but few compare to the glamorous spectacle of Atlantis's four signature suites. If your bank balance stacks up to a certain Kardashian, check yourself in to one of the two underwater suites with views into Ambassador Lagoon and its 65,000 inhabitants.

Spread over three floors, the Poseidon and Neptune suites have more luxuries than one would ever need, including a private lift, circular spa bath illuminated by floor-to-ceiling lagoon views, 24-carat gold flecked soap and a 24/7 butler service which one guest made use of in requesting a sky-diving Santa Claus to deliver gifts. And it can be all yours for a cool $10,000-$15,000 per night. 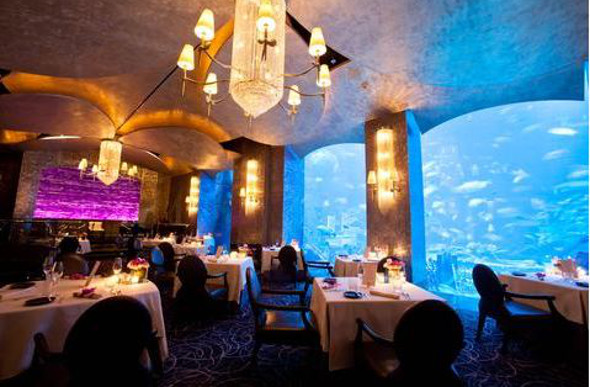 Lose yourself in the view at dinner (all images: Atlantis, The Palm Dubai)

Not only can you sleep like a celeb, you can eat like one too. Popular Japanese fine-dining chain, Nobu has a home at the hotel, along with 22 other top-notch venues. However, the most spectacular of all is the signature Ossiano restaurant, where an exquisitely crafted menu is paired with spectacular views into the Ambassadors Lagoon. For a fee, and with 24-hours notice, you can even have a skilled scuba diver deliver a message to your loved one.

4. Discover The Myth Of Atlantis

If you don't have the luxury of living out your Atlantean fantasies in an underwater suite, you can discover the mysteries of this lost civilisation, plus learn all about the 65,000 lagoon inhabitants, at the Lost Chambers Aquarium. Explore the underwater world on your own or book in for a behind-the-scenes tour. 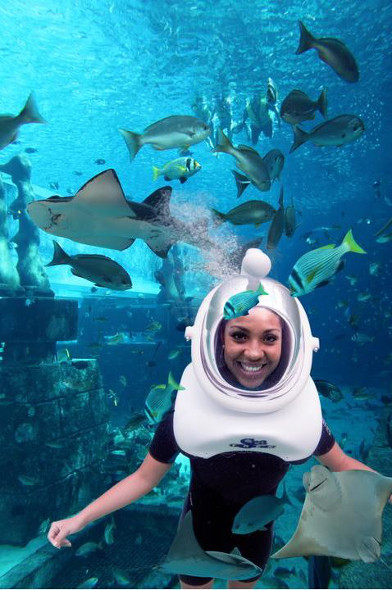 Don a helmet and 'walk' with the sharks

Safaris aren't just restricted to dry land. Instead of only viewing the sharks from behind the glass, why not don a specialised oxygen helmet and walk with them instead? There's no need to muck around with complicated mouthpieces or oxygen tanks, the helmets allow participants (including kids aged eight years and over) the chance to walk-slash-swim among a menagerie of marine life. 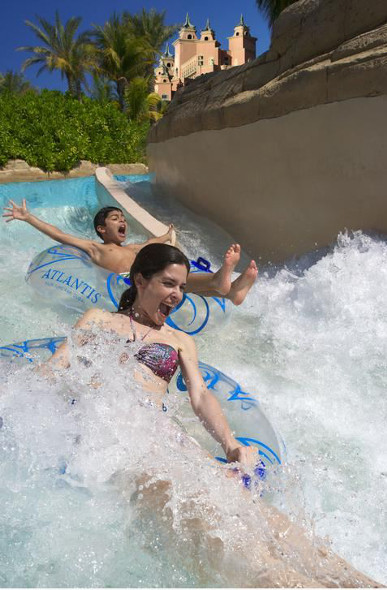 Alongside a private beach and two swimming pools is Dubai's most popular aquatic theme park, Aquaventure Waterpark. Expect fun for both the young and young at heart with everything from a lazy river and zip-line to a kids play area and towering waterslide that hurtles you right through the shark tank.

There may be something to keep you occupied throughout all hours of the day, but there's nothing wrong with squeezing in a little down time. That's where the kids club and ShuiQi Spa come in. The kids club is the ultimate haven for the little ones. There's fun for all ages, including 'Club Rush' for teens and a summertime science camp for any budding Sheldon Coopers. And while the kids are away, you've scored yourself time to awaken your senses with a range of exquisite relaxation treatments from the capable hands at ShuiQi Spa. And Zen...