Beijing's Summer Palace Will Fill You With Awe

Beijing's Summer Palace Will Fill You With Awe

It's not the Great Wall. It's not the Forbidden City. It's not Tiananmen Square or the Temple of Heaven. The most striking and remarkable attraction in all of Beijing is the Summer Palace. Across my eight visits to China, no manmade structure has filled me with awe like this enormous royal retreat.

China's largest and best-preserved imperial park, it is not a standalone palace but rather a gigantic complex spread across more than 280 hectares of lush, hilly land surrounding a lake in Beijing’s north-western outskirts. It is embellished by more than 1,000 structures, ranging from royal quarters to temples, pagodas, halls, pavilions, corridors, bridges and gardens.

While its scale is truly startling, the Summer Palace also fascinates on the micro level, with the exquisite detail of its craftsmanship. The walls, pillars, eaves and roofs of each building often are decorated with multi-coloured motifs, intricate carvings, or inscribed with Chinese philosophical quotations. 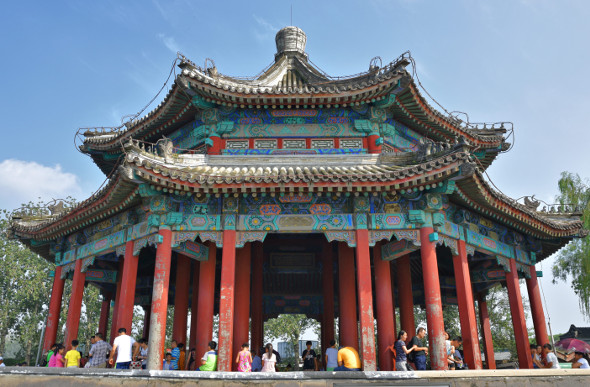 Built in the 1750s, before being destroyed during war in 1860 and restored some 26 years later, it was granted UNESCO World Heritage List status in 1998. UNESCO described the palace as a “masterpiece of Chinese landscape garden design” due to the manner in which it synthesises the natural environment with manmade structures.

Balancing the works of man with nature is one of the key themes of ancient Chinese philosophy. This co-existence of the environment and human activity has been somewhat lost in modern-day Beijing, where every week more and more land is swallowed up amid the city’s ceaseless growth.

So, in a mega-metropolis with a population of more than 20 million people, attractive and green open spaces are at a premium. This is part of what makes the Summer Palace such a fantastic tourist destination – even when it is crowded there is always serenity to be found within its wide expanses.

The palace’s main entrance is on its Eastern side. Enter through this gate, which is flanked by a pair of ancient, gilded Lion statues, and on your left you will see the grand Hall of Benevolence and Longevity. Royal court sessions once were held in this building, while Qing Dynasty emperors had their quarters in the magnificent Hall of Jade Willows directly alongside it.

It was one of these Emperors, Qianlong, who conceived of the Summer Palace as a gift to his mother. During his reign he had expanded several royal properties, including the Old Summer Palace, the ruins of which lie on a site just to the North-West of the new Summer Palace. 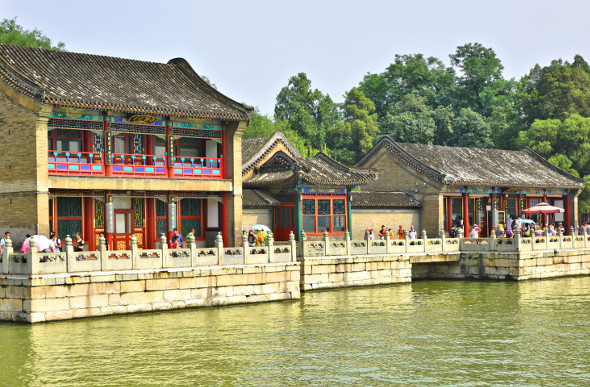 Relax by the lake at Beijing's Summer Palace.

The newer palace was comparatively humble to begin with but by the time Qianlong died in 1796, it had become an extraordinary feat of construction, engineering and design. Its glory soon disappeared, though, as the palace was destroyed in the Second Opium War in the 1850s.

It was rebuilt and suffered further damage during the Boxer Rebellion of 1900, before it was rejuvenated once more and took on its current identity as a public park in 1924. Wandering its immaculate grounds, past colourful pagodas, across stone bridges and through former royal quarters, it is easy to imagine the splendour of China’s Imperial era.

It is in these quieter moments that the charm of the palace comes to the fore. Beijing is an endlessly fascinating and entertaining city but also one that can sap your energy with its crowds, traffic and noise.

So follow the lead of the Emperors and use the Summer Palace as your restorative retreat. Wander beyond the tour groups, hugging the lake’s perimeter and enjoying the shade offered by willow trees, and you will discover your own piece of peace and solitude in a royally beautiful environment.

Visit your local Flight Centre store or call 131 600 for more advice and the latest deals on travelling to China.