Sweeping beaches, subtropical forests and coral reefs make up this string of 144 islands stretching out into the Pacific Ocean from New Zealand's remote Northland Peninsula. They are a stunning addition to the North Island’s natural beauty and home to hundreds of years of history just waiting to be uncovered. 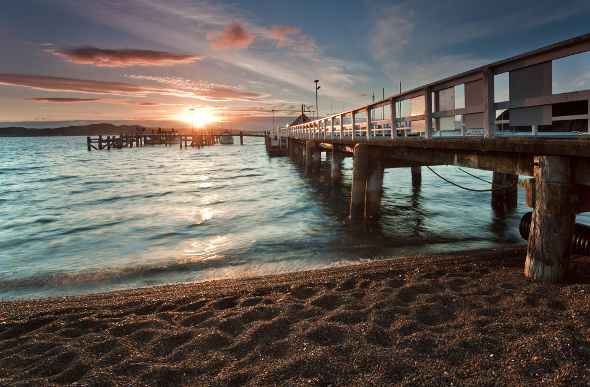 The sun sets on Russell

Paihia is the Bay of Island’s main town. It only a three-hour drive or 35-minute flight from Auckland, but its laid-back atmosphere and sweeping ocean views mean it feels like another world.

While there, be sure to visit Waitangi – one of New Zealand's most significant historic locations. The Treaty of Waitangi was signed here in 1840. It brought together a number of Maori chiefs and representatives of the British Crown, who signed a treaty which recognised Maori ownership of lands and gave the indigenous inhabitants the rights of British subjects.

At Waitangi Treaty Grounds you can experience Maori culture first-hand through a range of events, including a Maori welcome followed by a haka. The traditional war cry and dance has been popularised by the country's All Blacks rugby team, who perform it at the start of their matches.

From spectacular beaches to pods of dolphins, there are plenty of opportunities to explore the area's natural attractions on land and sea. From Paihia and Russell you can take a water taxi to the pristine island of Urupukapuka. It’s a popular camping spot for families over Christmas and into January.

Give your walking boots a workout by wandering from one historic site to another, taking in stunning 360-degree views from the highest point. Many of the island’s secluded bays and beaches can be reached on foot. Hiring a kayak and approaching from the water can offer a whole new perspective on these golden pockets of sand.

The beauty of the Bay of Islands is that everything is near the coast. But if you do head slightly inland, you’ll be rewarded with the horseshoe-shaped Haruru Falls. You can walk from here along the bush-clad riverbank to the Waitangi Treaty Grounds. Part of the track is on raised boards through a mature mangrove forest. If your walk coincides with low tide, watch for small crabs emerging from the mud.

Cruising, kayaking and scuba diving are just a few of the aquatic adventures you can enjoy in the Bay of Islands’ sparkling waters. To get up close and personal with the local wildlife, head to Tapeka Point just north of Russell. From here you can go on fantastic penguin and whale-watching boat trips. Alternatively, paddle out in a sea kayak and you might be joined by a pod of dolphins.

Russell is also the perfect base from which to explore Cape Brett. Take a boat out to Motukokako Island (also known as Piercy Island) and marvel at ‘The Hole in the Rock’ formation. When you are back on dry land, explore the town’s historic buildings. Built in the 1830s, Christ Church is the oldest extant church in New Zealand.

Paihia is the place to be on 25 October, when the ‘it! Bay of Islands Food and Wine Festival’ takes place. Join in the fun and test your skill against the locals in competitions such as oyster-shucking, pie eating, and kina -or sea-urchin - sucking.

Originally from London, freelance writer Helen Alexander has spent much of her life on the road and, after stints in South America and New Zealand, she is proud to call Melbourne her adopted home. When she isn't travelling, she's writing – and dreaming of her next destination.
more articles from this author