With eyes wide, there were moments I completely forgot to breathe. I guess that happens when you find yourself launching into the icy Atlantic Ocean with no snorkel and nothing but a few bars between you and a four-metre Great White Shark. Dun nun, dun nun, dun nun ...

I was about eight years old when I first saw Jaws. With summers spent poolside, it took me years to feel comfortable swimming in the deep end again, especially in the evening. To this day, the score to Spielberg's cult masterpiece sends chills down my spine.

Irrational fears aside, I never imagined I'd dive with sharks, let alone with Great Whites in South Africa. Not that it's something I would vehemently refuse to do. Let's just say I wasn't going to speak up if someone had forgotten to book us in.

Not going through with the dive wasn't an option, but Google image searches and YouTube videos in the days before certainly didn't help.

After what felt like the world's longest drive, we five brave souls arrived in Gaansbai on a blistery, chilly and overcast May morning. Two hour's drive south-east of Cape Town, this fishing-slash-surf capital is the home of Shark Alley. Said to be the most densely populated Great White zone on Earth, much of the footage from the Discovery Channel's annual Shark Week is filmed here. 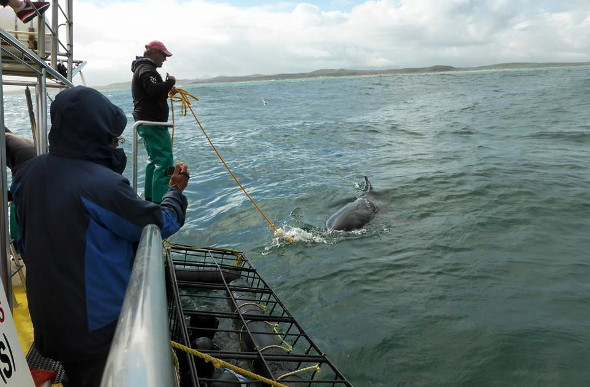 Here he comes... (all images and footage Derryn Cooper)

The aptly named alley runs between Dyer Island and a jagged mass known as Geyser Rock. The latter is the area's hottest restaurant - if you happen to be between two and six metres long, weigh two tonnes, possess a razor-sharp grin and an appetite for Cape fur seals. It's also only less than 10 kilometres offshore. Gulp.

There are at least a dozen licensed shark cage-diving operations in Gaansbai, ferrying keen adventurers out to the channel. As the Great Whites are wild, no operator will guarantee sightings. The best months for viewing are between March and September, though you generally won't be disappointed at any time of the year.

Over breakfast, our Dive Master, Lance from Sharklady Adventures delivers a comprehensive yet clear safety briefing. What wasn't clear, however, was exactly what he'd do to us if we dared reached out of the cage. Stick my hand out? Is he nuts? Yeah, that won't be an issue.

It's a 15-minute, hair-whipping journey out to Shark Alley from the harbour. Choppy seas are the perfect antidote to fear. Any sense of trepidation goes overboard when seasickness kicks in.

Once anchored, a cage big enough to fit five grown men is lowered and secured to the port side. The top of the cage remains dry so divers can come up for air (no breathing apparatus is supplied) – or to laugh, cry and swear. Or, all of the above.

Chum – a greasy, smelly concoction of fish oil and guts – is tossed into the ocean to entice the sharks close to the boat, as are tuna heads tied to a rope. It doesn't take long. As soon as those unmistakable dark dorsal fins slice the surface, things move at lightning pace.

It's not easy disrobing in the cold and squeezing into a wetsuit, hood, booties and snorkelling mask while your stomach is doing back flips. There's little time to contemplate exactly what you've signed up for, even as those mighty predators nosy past the boat. 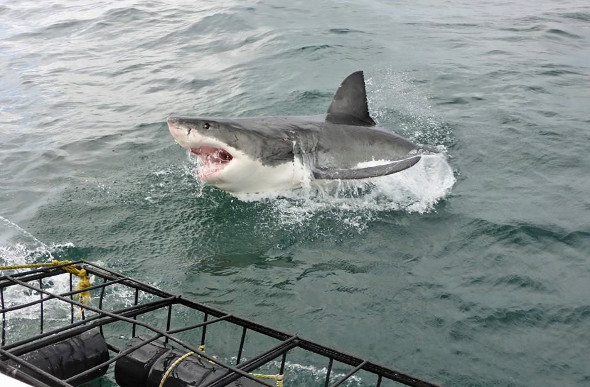 Before we know it, our little party of five are in the cage, churning bellies finally at ease. Again, nothing much registers in those initial moments; not the frigid water and certainly not what's lurking on the other side.

The cages are designed with interior bars to hook your feet under in order to maximise underwater viewing time. My five-foot-two stature doesn't really allow me to find my footing and I spend the majority of my time grappling with buoyancy and trying to keep my appendages inside the cage.

Lance lassos the rope and instructs us to dip down at the crucial moments. Cue underwater squeals. We have about 20 minutes in the water watching them gracefully glide past, enjoying an up close and personal view of their great frames and markings. Staring into the glassy eyes of gigantic Great White is a moment you'll never forget.

So, too, is seeing a shark breach for the first time. Non-divers will have more than their fair share of excitement from the safety of the boat. Shark after shark launches itself above the surface for a shot at seizing the tuna heads. One particular colossal four-metre Great White renders the entire boat speechless as it bares its razor sharp teeth in one powerful, athletic flip.

We saw no less than eight predators – though I use the term lightly. Having had the opportunity to get in the cage a second time, and with all fingers and toes accounted for, we spend the next few hours reflecting on the experience with a buzz of adrenalin.

According to a poster by the door of the dive shop, toasters kill 80 times more people than Great Whites do, and yet Vegemite and Nutella still do a roaring trade.

Diving with sharks dispels Hollywood stereotypes and all those sensationalist claims that they're nothing but man-eating giants that will devour anything and everything in sight. They weren't bothered in the slightest with us, more concerned with the fishy 'snacks' dangling before them.

I've a new-found appreciation for these creatures of the deep, having witnessed their sheer majesty from mere centimetres away. Maybe I'll even tune into Shark Week this year. But you'll probably never find me in a swimming pool at night. You know, just in case.

Visit your local Flight Centre store or call 131 600 for more advice and the latest deals on travelling to South Africa.