The Week that Was on a USA Mystery Tour with Sunrise

The Week that Was on a USA Mystery Tour with Sunrise

Well, we did it! We sent Channel 7’s Sunrise team all around the USA, thanks to the viewer vote and United Airlines. The USA Mystery Tour visited Hawaii, California, Nevada, Texas and the Southern states in five days. Here are some of the highlights of the week that was, courtesy of Flight Centre’s person on the ground, social media specialist Millie Yervantian. 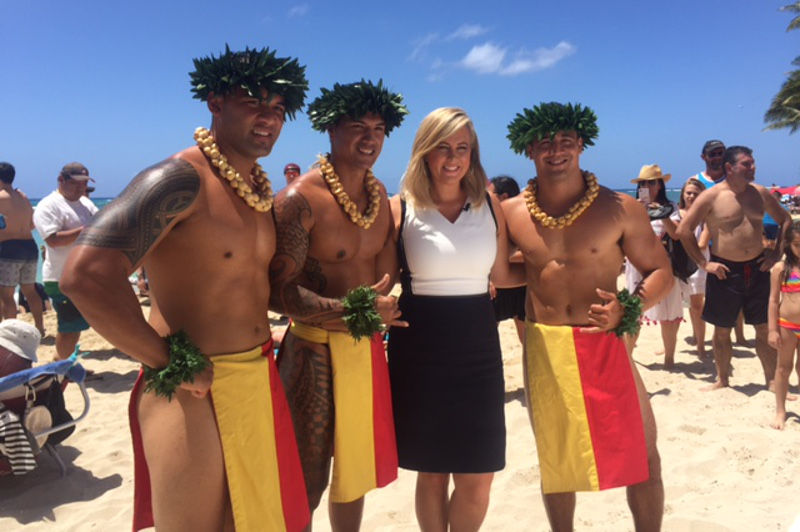 Sam meets some of the locals in Hawaii.

Later on, sunset Mai Tais and Hawaiian tapas were the order of the day, when the hosts met four lucky viewers – Cam (Western Australia), Cinzia (Victoria), Shelley (South Australia) and Max (New South Wales) – who came along for the ride. Then followed a traditional Hawaiian dinner for the Sunrise team, before an early night.

Once rested, Max and Cam hiked up beautiful Diamond Head for sunrise, while Cinzia and Shelley checked out the historical Hard Rock Cafe in Waikiki. Then it was live on air, all systems go!

The cash cow got lei'd and hung out on Waikiki beach working on her tan, while Kochie and Sam cut a rug with some local dancers. Beretts, meanwhile, learnt to make a Mai Tai.

Once the show was over, everyone headed to the Moana Surfrider hotel in Waikiki for a beautiful lunch of mahi-mahi tacos and poke nachos.

After a quick swim at Waikiki Beach, it was off to Honolulu airport to catch the flight to San Francisco with United. 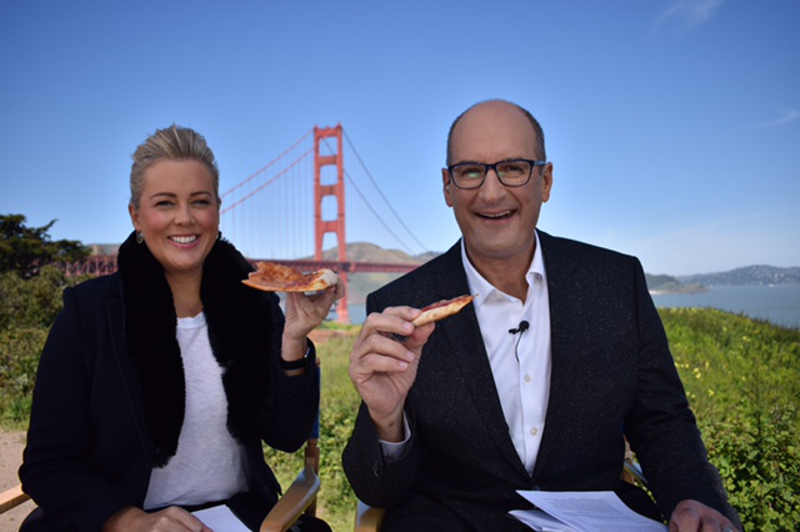 Sam and Kochie feast in Frisco.

The team landed in San Francisco at 5am and went straight to Union Square in the heart of the city to check into the Westin St Francis hotel.

After a two-hour sleep, the crew met for a quick breakfast and plenty of coffees before making their way to the bay (with some impromptu karaoke on the way).

There was just time to scoff down some giant, deliciously cheesy pizzas before the hosts were live on air under the hot Californian sun, broadcasting from Battery Park, with the striking Golden Gate Bridge as a backdrop.

Among the many who stopped by on their way to the bridge was a local couple on their wedding day who, of course, were invited to appear on air.

Elsewhere in California, Eddie hit up Venice Beach in Los Angeles and Sam Mac checked out Legoland in San Diego, living out a childhood dream.

After the broadcast, it was back on the bus and straight to the airport to check in for the United flight to Las Vegas. 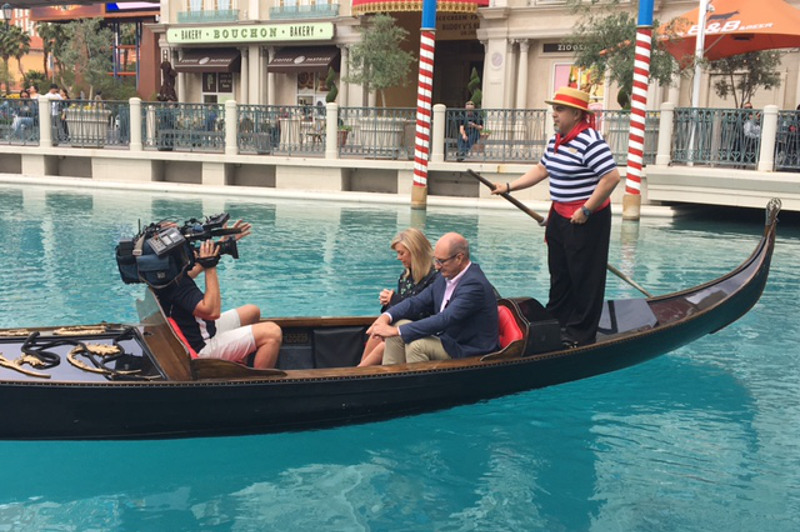 Broadcasting from a gondola in Vegas.

The crew landed in Las Vegas, the city of bright lights, at 10pm and made their way down the Strip to the incredible Venetian Las Vegas – in a limo, no less. Max and Cam went with Beretts on a helicopter ride over the Strip with Maverick Helicopters. The effects of our lack of sleep over the past few days dissipated as we picked up on the incredible energy of Vegas.

After checking into our luxe rooms, we hit up the VIP section of the Venetian’s cocktail spot The Dorsey, for drinks in its library bar. The ’80s hits were cranking and Kochie and Cinzia were singing and dancing the night away, while Max and Cam hit up the roulette table.

The next morning the sun was shining down on set in front of the Venetian, along its famous canals. So many Aussies seemed to be holidaying in Vegas and they joined us for the broadcast. After a few gondola rides, it was off air and on to the airport, ready to get to our next destination: Fort Worth, Texas. 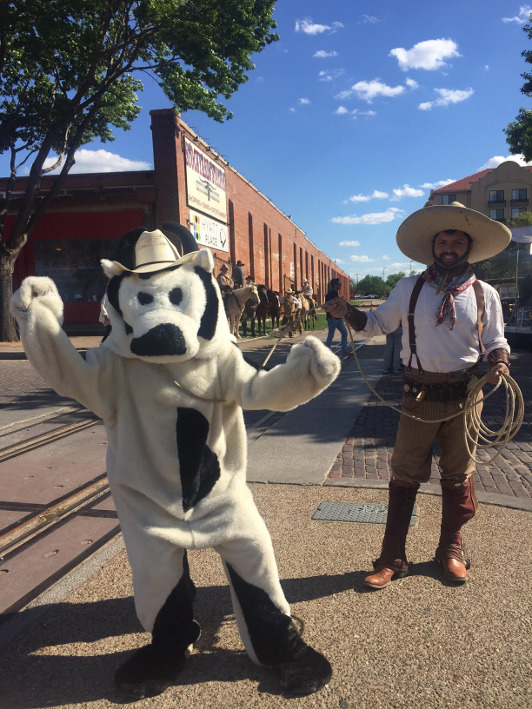 Landing in Fort Worth, the gateway to the Wild West, at 10pm, the crew drove through the old town, which was like stepping back in time. Everyone hit bed straight away to get some much-needed sleep.  The next morning, the team hit the Fort Worth Stockyards early to stock up on cowboy boots and vests for the day.

On-air shenanigans included line-dancing with cowboys, cheering with the Dallas Cowboys’ cheerleaders, learning how to cook Texan grill, and watching the historic Fort Worth Cattle Drive go by with about 40 cattle. The Cash Cow was in her element, so we called on one of the cowboys to lasso her in.

Meanwhile, Sam Mac was in San Antonio, Texas, enjoying its Mexican-influenced culture along the Riverwalk; and Beretts was in Houston on a culinary journey taste-testing Texas ribs.

Then it was off to the airport to make the next flight to New Orleans. 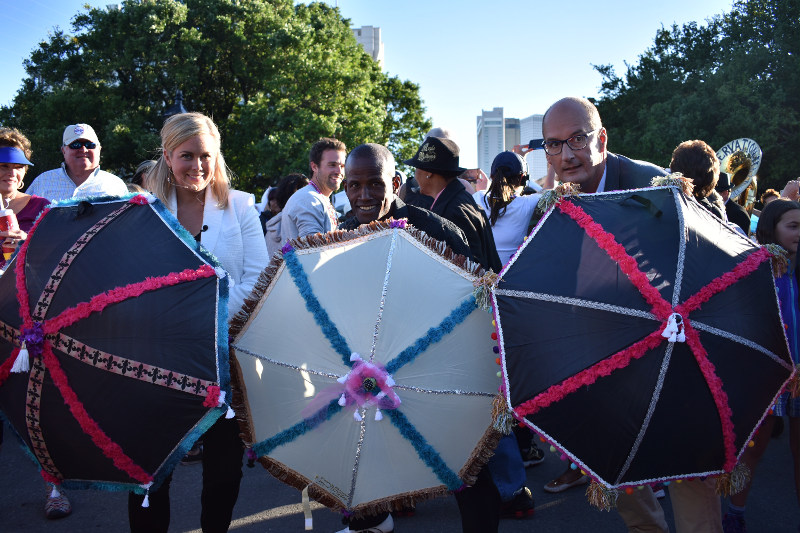 Sam and Kochie join in the French Quarter Festival in New Orleans.

We landed in New Orleans at 10pm and made our way to the Sheraton New Orleans and the Westin Nola to check-in. We went out for a 1am dinner of popcorn shrimp, po’ boys and gumbo.

The next morning the streets of the French Quarter were alive with jazz for the French Quarter Festival. Sam and Kochie grooved to the tunes of the Preservation Hall Jazz Band, danced with American-Indian Mardi Gras performers and did a tarot card reading. And the Cash Cow got among the crowd at the festival.

Over in Nashville, Tennessee, Sam Mac hit famous Ryman Alley to get a taste of honky tonk on the streets. And in Atlanta, Georgia, Beretts checked out the World of Coca-Cola.

After the broadcast, we headed to the House of Blues for a well-earned nice southern-style dinner and drinks. And that’s a wrap!

Why Canada Is The Best Place To See The Northern Lights
2 December 2019
I met my Yukon guide, Kalin, and we step outside into -5 degrees Celsius and 20cm of snow, which is rare for early October, setting the winter
Read Time: 5.8 mins