Just a short ferry ride from Auckland, Waiheke Island is a national ‘taonga’ (treasure) of unspoiled beaches, vineyards and olive groves, native forests and laidback seaside villages. Known as the ‘island of wine’, Waiheke produces some of New Zealand’s best red wines, thanks to its warm, dry summers and stony soils.

There are around 30 wineries and vineyards in this little pocket of paradise, many which have achieved international admiration. The climate is well suited to growing Bordeaux wine-type grapes, with Waiheke winegrowers regularly winning awards for Syrah, proving the island's soil suits it well.

Some chardonnay and sauvignon blanc varieties are also considered top notch. Scattered across the island, the vineyards themselves are as varied as the wines; some boasting sleek, modern restaurants and tasting rooms, while others are more rustic. 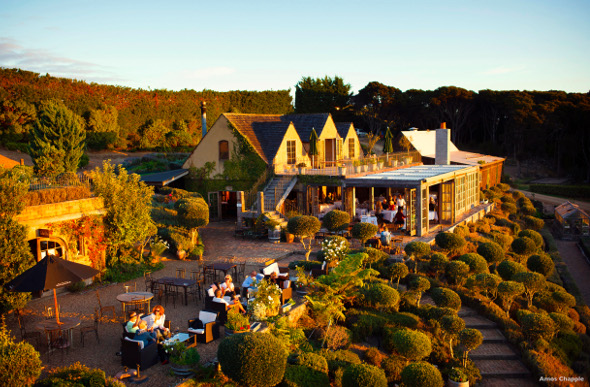 If you’re short on time, or just want a five-star experience, fly over to the island by helicopter and land at one of the vineyards for lunch. The most popular ones for helicopter landings are Mudbrick, Stonyridge and Cable Bay. The wine-friendly climate is just as good for making outstanding virgin olive oil, which you can taste at the award-winning Rangihoua Olive Estate.

If you’d prefer a cleansing ale, the Waiheke Island Brewery at Wild on Waiheke brews its own craft beers on site without artificial ingredients or additives.

The micro-brewery’s ‘Onetangi Dark’ goes perfectly with the local Te Matuku Bay Oysters, which are also farmed in the gin-clear waters of the island.Brewery tours run twice daily on weekends.

More than just a tipple

Waiheke has also gained a reputation as a gourmet food destination. Fresh seafood features on many restaurant menus, and many of the wineries have superb world-class restaurants.

Adventure seekers will have no problem getting an adrenaline fix on Waiheke Island. You can go ocean kayaking and mountain biking, or zip through the tree tops on a flying fox.

Waiheke has several beautiful beaches, but the best ones for swimming are at Oneroa, the island's main town, close to the ferry terminal, and at Onetangi, which is about a 20 minute drive away.

Onetangi’s two-kilometre stretch of white sand lends itself to all manner of beach activities so bring your bat and ball with you; or you could just take a nap beneath one of the sprawling pohutukawa trees.

The vineyards of Waiheke Island complement its relaxed lifestyle

Talk a walk on the Waiheke side

The island’s coastline boasts many delightful walks with stunning views of the surrounding islands and the Coromandel. Walking trails start right at the ferry terminal - just follow the coast left or right as you leave the wharf and follow the signs.

Explore the tunnels, underground chambers and gun emplacements at Stony Batter Historic Reserve, an old World War II fort named after its unusual stone formations. You can also discover the island’s rich Māori history on an interactive tour with a local guide. Archaeological sites are dotted all over the island, including more than 40 original pa (Māori village) sites.

Waiheke is also one of New Zealand’s most exciting artistic centres with a large population of writers, poets and painters. The island was an isolated farmland until the 1970s when it was discovered by artists and alternative life-stylers.

Drop into the Waiheke Community Art Gallery and see the works by both local and internationally renowned artists who have chosen to make the island their home; or get a taste of the local bohemian arts scene with a tour of the independent studios and galleries. You’re sure to find a one-of-a-kind piece to take home. 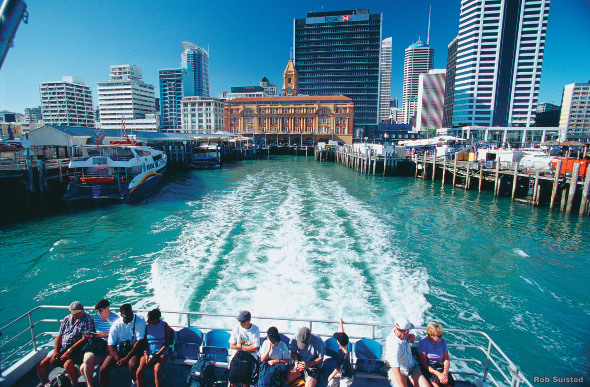 A whale of a time

Waiheke Island is part of the Hauraki Gulf Marine Park, considered one of the most biologically and geographically diverse marine parks in the world.

Whale watching operators guarantee you’ll have a 90 per cent chance of seeing dolphins, and a better than average chance of encountering whales. Hauraki Gulf was the backdrop for the defence of the America’s Cup; and you can stage your own version on an ex-America’s Cup boat.

Comfortable fast catamarans operate from Auckland to Waiheke throughout the day. The trip takes 40 minutes. SeaLink run large vehicle and passenger ferries from Halfmoon Bay, so you can take your car across to get around in your own time.

A good way to make the most of a day trip is to combine your ferry ticket with one of the great value island tours. It’s also possible to wing your way to the island on a light aircraft flight. The views over the islands are breath-taking.

With such easy access from Auckland, and a wealth of things to do and see, Waiheke is perfect for a day trip or indulgent weekend getaway.