Top Free Things To Do In Edinburgh

Top Free Things To Do In Edinburgh

Tweet
Read Time: 5.9 mins
Ah, sae yoo've booked a trip tae Scootlund Ah see?
Whenever someone asks me how long they should stay in Edinburgh, I always respond with at least four nights or a week to see the Scottish capital comfortably. Auld Reekie (Old Smoky) is a city with five entirely different things to offer you in the expanse of just 100m. Every time you think you’ve seen it all in an area, something else catches your eye.
Edinburgh is famous for its iconic castle as well as being renowned for its scream-inducing dungeon; Holyrood Palace, where Queen Elizabeth II resides when she visits; and the many, many whiskey shops. But as with all things in Scotland, the best things in life are free and set to the sound of bagpipes. Here’s our top free things to do when in Edinburgh. 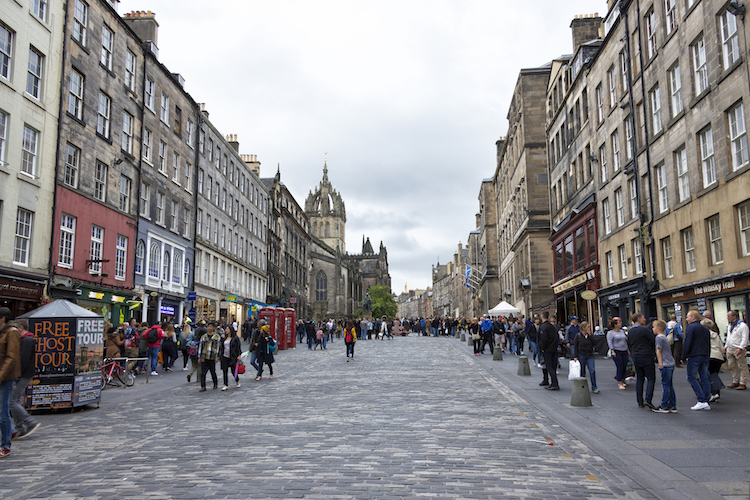 The famous Royal Mile with Saint. Giles Cathedral in the background in Edinburgh, Scotland, United Kingdom.
You have to get to the castle somehow, right?
The famous mile-long road that starts at the entrance to Edinburgh Castle is well known as the focal point of Edinburgh, and for good reason. Here you’ll find multiple street performers, information sessions, free and paid guided tours as well as multiple key spots for any tourist in need of something urgent such as an ATM, premium whiskey or that one kilt you just have to buy.
The great thing about the Mile is everything stems from the Mile in some fashion. Want the bridge to cross to New Town? Find the Mile. Looking for the famous World’s End pub? It’s on the corner of the Mile. Want the easiest method to get to the famous hiking spot (we’ll get to that in a bit)? Follow the Royal Mile.
The pathway is notoriously narrow, which means cars can only drive on the road in select areas, making the road a mostly pedestrian-only street. However, it must be noted the centre of the road is mostly polished, round stones so it can be uneven and slippery while walking in heels or shoes without much grip.
While entry to Edinburgh Castle is around £12 (approximately AUD$21.70), the rest of the grounds are free to wander. Stay around at 1 pm to hear the daily One O’Clock Gun going off.

2. Discover the tale of Greyfriars Bobby 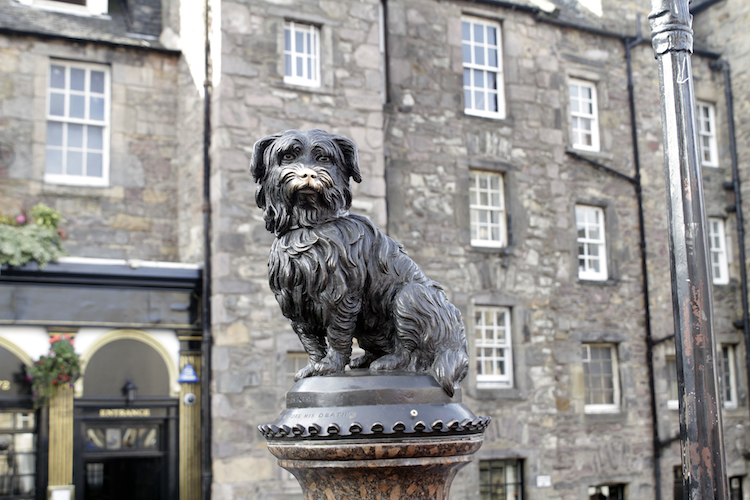 Close-Up Of Greyfriars Bobby Statue Against Building, Edinburgh, Scotland
While exploring Edinburgh, at some point you’re bound to come across a mention of ‘Greyfriars Bobby’, an infamous Scottish story of a dog who missed his owner. The tale is about a Skye terrier, known to locals as the aforementioned Greyfriars Bobby, who was owned by Scottish police nightwatchmen John Gray. When John passed away, Bobby sat on his grave for 14 years until he passed away himself in 1872. He was later buried close to his owner in the same graveyard just off the Royal Mile.
Now there are multiple Bobby souvenirs and plaques, most notably in the form of a statue on the corner of Candlemaker Row and George IV Bridge, the area John Gray supposedly frequented on his rounds. The statue is directly in front of the titular pub, Greyfriar’s Bobby, which does a fantastic beef and Guinness pie, and is located 50m from the graveyard where John and Bobby are buried. While entry to the graveyard is free, a gold coin is requested at the honesty box. 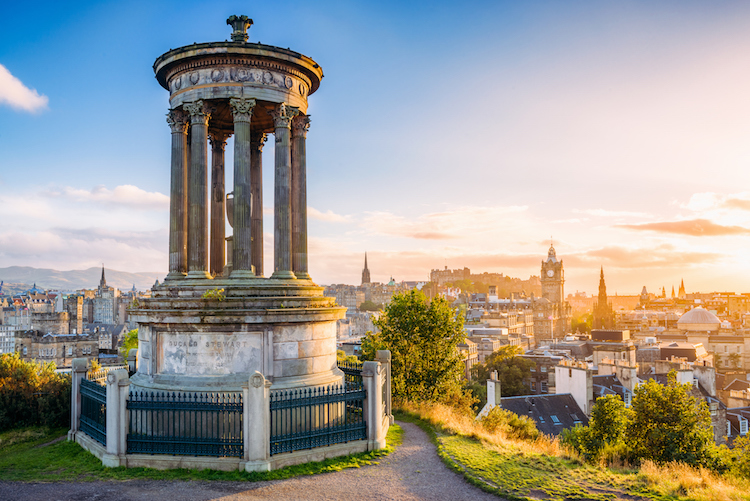 A view over central Edinburgh at sunset, taken from Calton Hill, with the stone memorial to Dugald Stewart (1753 - 1828) in the foreground.
Calton Hill is in the New Town side of Edinburgh, just a short walk from the famous Balmoral Hotel, and located on the north side of Princes Street opposite New Parliament House. After climbing 200 steps (you get used to hiking upstairs in Edinburgh), you’ll enter a flat grassed area with multiple little structures and monuments. This is Calton Hill.
You’d be forgiven if you had mistakenly thought you were in Athens with the National Monument, a memorial site to the Scots lost in the Napoleonic Wars, looking a lot as if the Acropolis was cut in half, and the much-photographed Dugald Stewart Monument modelled directly after Athens’ Tower of the Winds.
The best part about Calton Hill, however, is the view. With a little bit of timing and an effort to rise early, you can have arguably the best sunrise view in all of Edinburgh with a fantastic photo of the sun just appearing on the horizon, cutting through Dugald Stewart and softly shining on the city and the castle. The opposite side of Calton Hill looks out onto the picturesque Edinburgh Harbour and Scottish coastline. The view is also the perfect backdrop for a picnic, should you want to pack a hamper and enjoy the 360-degree view. 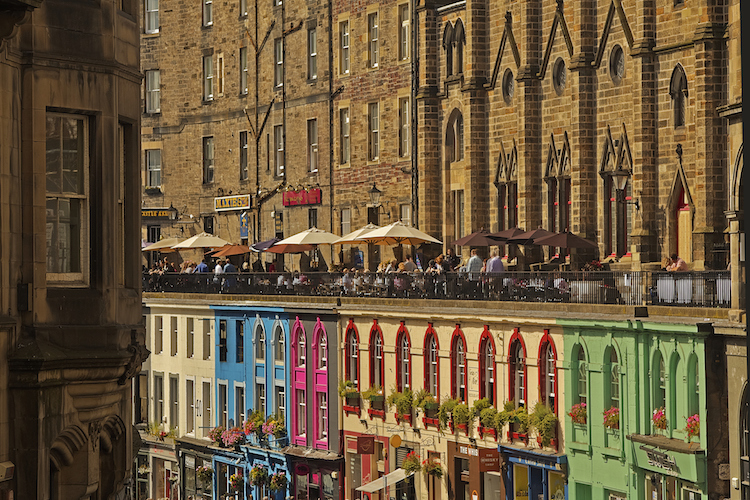 Victoria Street, Edinburgh Old Town, Scotland, United Kingdom.
J.K Rowling famously created and ended the story of Harry Potter in the city of Edinburgh.
The castle itself inspired J.K to begin writing The Philosopher’s Stone in the back of the still-running, and always-packed Elephant House Cafe. While the cafe does not market itself as a Harry Potter location, fans have made it one with the bathrooms largely covered in wizardry-themed graffiti. A hop over to the adjacent Royal Mile will have you within the Edinburgh City Chambers, where J.K Rowling’s handprints are bronzed much like those on the Hollywood Walk of Fame.
Not too far from Elephant House are the colourful streets of Victoria Street and Candlemaker Row, which became the inspiration for Diagon Alley in the Harry Potter series. Victoria Street has a joke shop, although Fred and George Weasley sadly do not work there, and Candlemaker Row has the Diagon Alley plaque and mural.
Finally, in every sense of the word, is the luxurious Balmoral Hotel where Rowling finished writing The Deathly Hallows. The luxury suite at the top of the hotel was where it all ended, with J.K signing off behind a bust timestamping when she had typed the last word. The room where she completed the story, now called the J.K Rowling Suite, is certainly not free (it’s about £1,000 a night), however, you can easily visit the outside of the hotel conveniently near Waverly station. The hotel is particularly beautiful at night. 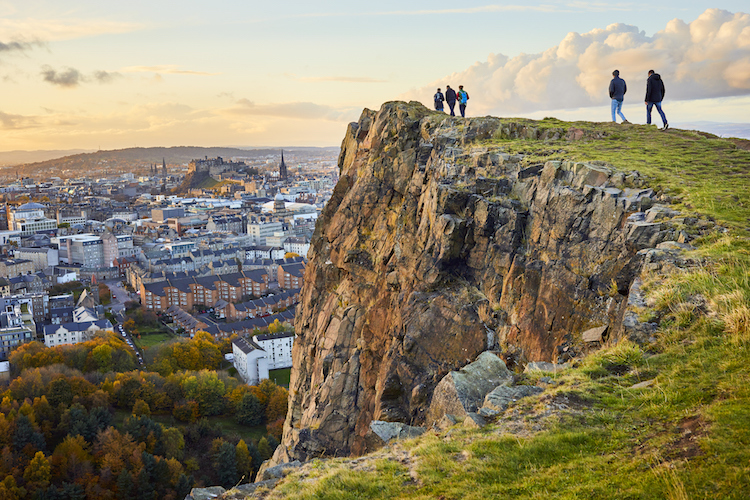 Group of people walking along cliff edge looking at city views. Edinburgh Castle in the distance.
I have saved the best for last. If Calton Hill has the best sunrise view of Edinburgh, then Arthur’s Seat has definitely the best sunset view.
Arthur’s Seat is a cliff face that looms over Edinburgh like a watchful protector – about a 30 to 40-minute walk from Old Town and New Town, depending on where you are staying. The cliff is sheer at the front but has a steady climb from the back. Hiking from the base to the top will take around 45 minutes but the view is well worth it.
Arthur’s Seat is also part of Holyrood Park, which encompasses the circumference of the cliff and gardens on the back of the mountain. One thing to note: there are no guard rails whatsoever. If you have safety concerns about climbing at dusk, I recommend going during the day. The view is fantastic and you can find guides who assist free of charge.
However, seeing the city at sunset or, in my recommendation, at night is something to behold. No view compares to seeing all the landmarks lit up in the darkness with Edinburgh Castle jutting out of the middle of multiple buildings, appearing as a golden beacon. Take some drinks in a backpack to enjoy at the top of the climb as a well-earned reward – as well as the reward of the view itself, of course.
Edinburgh scotland