Aurora borealis, or the Northern Lights, is an incredible natural light display that fills the dark Arctic skies with vast waves of green, yellow and red. Sit back, relax, and marvel over this spectacle from the comfort of a cruise ship. 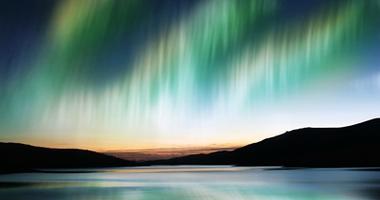 The breathtaking light show of aurora borealis has inspired myths and legends for thousands of years. There's no better way to experience this natural phenomenon than with a dedicated Northern Lights cruise.

By far the best displays of the Northern Lights are above the Arctic Circle in Arctic Norway, Iceland, Canada and Alaska. The golden rule is - the further north you travel the more likely you are to see the fantastic light show.

The city of Tromso in Arctic Norway is a popular start and end point for Arctic Norway cruises. Icelandic cruises often depart from Reykjavik - Iceland's capital is ideally located for admiring the Northern Lights, but the surrounding rural areas offer better Northern Lights viewing because of the absence of urban glow. In addition, north west Canada and Alaska are large cruise regions that are also well known for Aurora Borealis viewing.

Between September and March is the best time to see the Northern Lights, but many locals swear that November to March offers the most favourable weather conditions. A dark, dry, cloudless night with no moon is the ideal forecast to see a awesome display. Check the lunar cycle around the dates you want to book your cruise and try to avoid booking your Northern Lights experience when there's a full moon.

During the winter, it's dark from around 6pm to 1am in countries above the Arctic Circle and this is the time the Northern Lights are visible, though you may have to be patient some nights. December 21, the winter solstice, is the longest night of the year and therefore has the most time to see the Northern Lights.

To book your Northern Lights cruise or to find out more, call one of our Travel Consultants on 13 70 79. Don't forget to ask about great deals on flights, transfers, travel insurance and more.