There's no disputing the Australian coastline has some spectacular beaches. Surfers Paradise on the Gold Coast, Bondi Beach in Sydney, Cottesloe Beach in Perth and Bells Beach on the Great Ocean Road are synonymous with fantastic water-based pursuits. However Australia also has a range of lakes that are equally beautiful and offer a fun-filled alternative to the beach break. 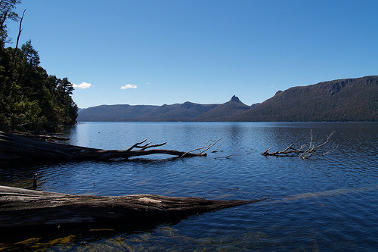 Blue Lake, Stradbroke Island
For absolute peace and tranquillity, make your way to the Blue Lake in the heart of stunning Stradbroke Island. This perched lake is best accessed via a two kilometre stroll from the designated car park. The swimming is refreshing and chances are you'll have the entire waterway to yourself. If you can't resist the beach, continue walking eastward from the lake to hit Stradbroke Island's east coast or drive up to Point Lookout in the north.

Lake St Clair, Tasmania
At a depth of 200 metres, Australia's deepest lake is the oh so beautiful Lake St Clair. Many visitors to Tasmania, head to Cradle Mountain, which is located within the same national park as Lake St Clair, but I think both are worthy of exploration. The hiking opportunities around the lake offer beautiful views and there's usually an echidna or two who’ll greet you along the way.

Lake Argyle , Western Australia
Located in the Kimberley region near the border of the Northern Territory, the man-made Lake Argyle is a great place for a range of water activities. Water skiing and sailing on the lake are popular - as are fishing and scenic cruising. Lucky travellers may even spot a freshwater crocodile.

Lake McKenzie, Fraser Island
Noted as the largest sand island in the world, Fraser Island is one of those special places that deserves extra attention. After checking into your resort, take the four-wheel drive to Lake McKenzie in the heart of the island. The lake is perched within impossibly white silica sand, which means many fish can’t survive in its water. However the effect of the silica also ensures that algae can't grow – the result is incredible water clarity.

Lake Eyre, South Australia
When Lake Eyre fills it becomes the largest lake in Australia. However the inland lake is around 15 metres below sea level and as such rarely fills entirely. But don’t let the prospect of water deter your exploration, with or without water this is a mesmerising sight. In the absence of water, the expanse becomes an incredible salt plain.