While Bondi Lifeguard Anthony Carroll, or Harries as he's better known to viewers of the Network 10 program Bondi Rescue, recognises the beauty of the beach itself, he also recommends all visitors experience the coastal walk from Bondi Beach to Coogee Beach.

"I encourage everyone to really get involved by doing the coastal walk from Bondi to Coogee; it's the most magnificent walk. There's nothing like it anywhere - it's the beautiful scenery, the beautiful people, the happiness, it's got that feeling of being active," said Harries.

"There's no playground like Bondi anywhere in the world. I recommend that the tourists come down and have a perve on the hunky Lifeguards." 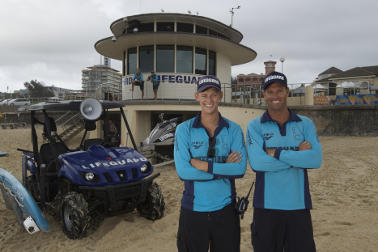 Harries is joined in the iconic tower by Trent Maxwell. The 21 year old, who goes by the nickname of Maxi, looks back on the past seven years patrolling Bondi Beach with relative surprise.

"It's been crazy. In the past seven years I've done some unbelievable stuff, travelled around the world, sky-dived, but also the reality of the job is that I've dealt with some serious situations including death and suicide. It has made me grow up really quickly," said Maxi.

"For me it's the responsibility of ensuring the safety of the people that come to the beach. Bondi is one of the busiest beaches not just in Australia but the world. Being a lifeguard you get to save people; it's the good deeds. The beach is your office. I've met some great people and done some crazy things including water rescues, dealt with hearts attacks, performed cliff rescues. It's adrenaline pumping."

Maxi has always been a self-confessed water baby. He received his first taste of life saving on Maroubra Beach in Sydney's south before knocking on the door of Waverley Council when he was 16 to apply for a full-time professional lifeguard position. Waverley Council is responsible for providing professional assistance for three Sydney beaches - Bondi, Bronte and Tamarama. However Bondi is the only beach that's open year round.

"We're paid professionals; to make sure everyone is safe at the beach 365 days a year. It's quite common for tourists to fly into Sydney airport, drop their bags off at their hotel and come straight to beach. Bondi is located close to the airport and the Sydney CBD. If visitors swim between the flags, wear lots sunscreen and drink plenty of water then they'll have a great day at Bondi."

Now in its eighth season, the multiple Logie award winning factual television program, has focused the nation's attention on the lifeguards who day in, day out ensure the safety of all beach-goers. While Bondi Rescue is a firm favourite here in Australia, the show is broadcast to over 200 countries around the world. 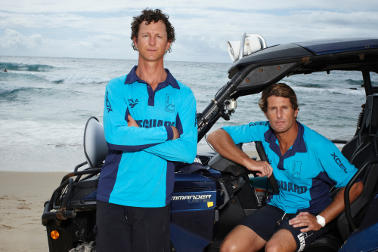 Harries, who's been life guarding for 18 years, has featured in the program since the start.

"We've become global ambassadors for Bondi. We're all very much recognised. People just know who you are. It's been a really good thing for all of us. The show has reduced the amount of people being rescued because tourists are now more aware of beach safety," said Harries.

Maxi first appeared during the third season in 2008 and has become a key figure since; his actions in the show have delivered notoriety.

"I was walking down the street with London with Hoppo and this person kept staring at me. We just kept walking and he kept looking back. Finally he came up to me and said, 'In Iraq, war stop when Bondi Rescue come on.' I just feel lucky that it's such a good beach to work on."

When Harries isn't surfing the breaks at Bondi his favourite holiday destination is Bali.

"I've been going to Bali since I was 17. It's the tropical environment and the relaxed vibe. There's just no pressure," he said.

"I recently had my honeymoon at The W Retreat & Spa in Seminyak. My wedding was on the headland at Clovelly, near where I grew up. My wife is an amazing woman; I met her on a blind date arranged by ex-iron man, Leon Hay. He asked me if I wanted to come out to dinner, and I was thinking this could be quite pear shaped but she was stunning with an amazing personality. The very next day I did a photo shoot in the Maldives with six bikini clad girls and I spent the whole time talking about her." 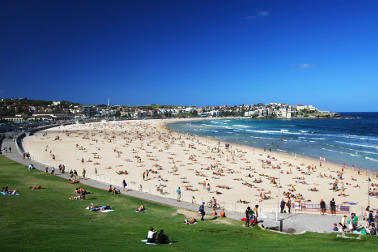 Maxi - Bondi Pizza underneath the Swiss Grand on Campbell Parade. They do great gourmet pizzas and have good customer service. My favourite pizza is the Bondi Meat Supreme with pepperoni, meatballs, pancetta and mushrooms.

Harries - I love the chilli beef nachos served at the Beach Burrito Company in North Bondi.

Maxi - The Canteen, it's next to Bondi Pizza. I had a beer there last week; it's more for Gen Y and great for a dance. If you want to take a chick on a date you can't go past Ravesis, which has good cocktails.

Harries - The Bucket List. It's a popular bar that's right on the beach; the scope looks out over the whole beach and down towards the lifeguard tower. Its groovy and perfect for all age groups. Full of atmosphere with stunning ladies and men that look like Roman Gods.

Maxi - Café Bondi in Hall Street. It's pretty good for breakfast. I have the poached eggs and coffee.

Harries - Speedos Cafe. The carrot cake with the icing is unreal and the coffee is great also.