Forgo the obvious big ticket attractions and instead leave your guidebook behind and see Singapore like a local. From one-of-a-kind pastimes and secret watering holes, to fortune tellers and quirky retail adventures - there’s plenty to experience in the Lion City that’s well and truly off the tourist trial. 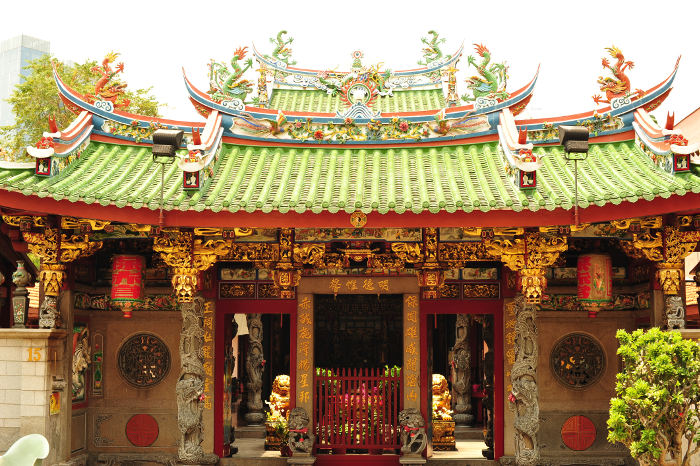 Tan Si Chong Su on Magazine road is the only temple in Singapore that’s open 24/7.

A foil to the nightclubs that sit nearby, Tan Si Chong Su on Magazine road is the only temple in Singapore that’s open 24/7. Believed to have excellent Feng Shui, the 19th century ancestral Hokkien place of worship is one of the oldest in the country. A mass of colourful Chinese architecture, gardens, shrines and countless statues of various gods and goddesses, this is THE place to go for some heavenly counsel at any time of the day or night. 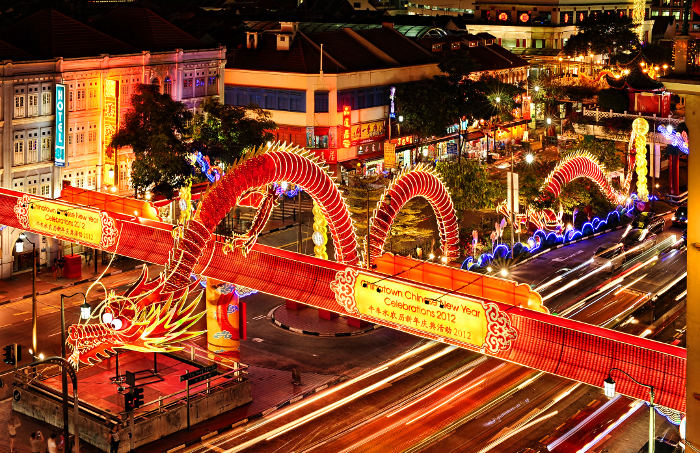 Chinatown is the heart of Chinese New Year Celebrations, as well as a popular shopping destination.

Not a fan of ubiquitous souvenirs? Thanks to its ever-evolving cultural mix of Chinese, Malay, Indian and everything in between; in Singapore retail hounds can effectively shop in three different countries in one day.

In Chinatown, amidst traditional houses and medicine stalls, check out the numerous religious stores for unique candles and varieties of ‘joss paper’ (paper burned for prayers and offerings). You’ll also find haphazard bric-a-brac stalls run by friendly ‘uncles’ and ‘aunties.’ Admittedly hit and miss, a rummage can unearth a treasure or two for next to nix. Bring cash and be prepared to haggle.

In Little India, you can pick up trinkets and cool figurines of Hindu deities, plus sticky Indian sweets and fresh jasmine wreaths. While in Arab Town, traditional Middle Eastern fabrics and heady Arabic perfumes.

A few standout shops to visit are Junkie’s Corner on Turf Club Road for unordinary antiques sourced from across Southeast Asia and Ming Fang Antique House, which is an Aladdin's cave of collectibles, including Buddha statues, masks and coins. 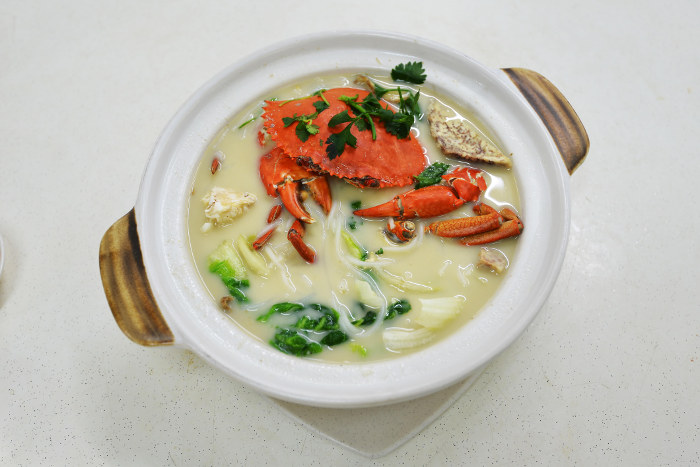 According to the late, great Anthony Bourdain, Sin Huat Eating House has the best crab bee hoon in Singapore.

Singapore’s dizzyingly diverse food scene has visiting gourmands salivating and at its culinary epicentre are the bargainous hawker centres.

The first port of call for hungry travellers, you can eat like a prince with a paupers pay packet. But what many visitors may not realise is many of these stalls have also been given the nod by the highest food authority on the planet: Michelin. Hawker stalls Tai Hwa Pork Noodle at Crawford Lane, and Liao Fan Hong Kong Soya Sauce Chicken Rice and Noodle in Smith Street’s Chinatown Complex, have been awarded a prized star each.

Other must-try street eats, include two hole-in-the-wall restaurants in the former red light district turned eating hotspot, Geylang. Hailed by Anthony Bourdian as one of the ’13 places to eat before you die’ Sin Huat Eating House has what is said to be the best crab bee hoon in the city. For the best frog porridge in town, hop on down to neighbouring Geylang Lor 9, which serves up the amphibian delicacy served in a hot claypot with a side of congee.

If you don’t want to queue or want to hit multiple places in one go, consider a food walking tour with local operator Monster Tours (monsterdaytours.com) who can tailor a bespoke trail to suit your foodie needs.

RELATED: All the best of colourful Singapore

And we don’t mean a Singapore Sling. While trying the country’s national cocktail at Raffles is on the tick-list for most first-timers, there’s far better alcoholic tipples to be had.

As with brunch, the cocktail scene in Singapore has undergone a real revolution over the last few years and it’s now becoming known for some seriously unusual and innovative drinking dens. In fact, 5 of the top 150 cocktail bars in the world are actually here and the reigning champion is 28 Hong Kong Street.

Accessed via a ‘secret’ entrance on the ground floor of an old shophouse, the under-the-radar, dimly-lit bar channels a vintage speakeasy, too-cool-for-school vibe. But there’s serious substance too with its menu of unique Singaporean creations that you won’t find anywhere else. 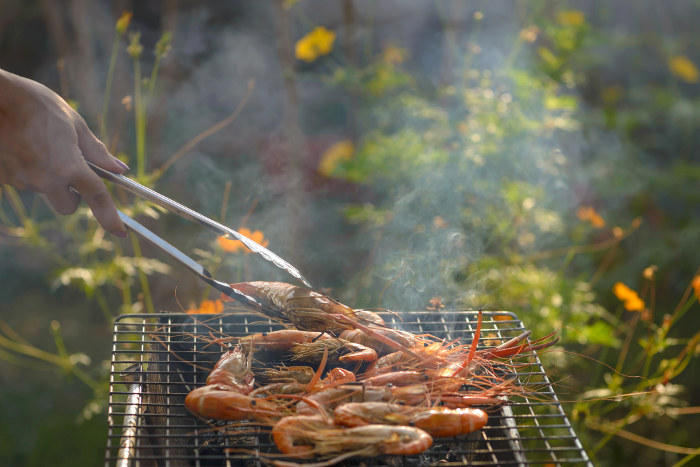 Embrace the thrill of the chase, then cook your catch on the spot at one of Singapore's quirky prawn catching centres.

Catch Your Own Supper

If you’ve got a hankering to fish but can’t make it to the ocean then try the latest Singaporean craze: prawning.

Admittedly westerners may question its entertainment factor, but the experience is definitely unique and the concept is pretty simple - grab a rod and bait and then sink a few beers as you try your luck. There are a few different venues where you can try out the unusual pastime - many in the heart of the CBD - including Hai Bin (haibin.com.sg) which has two venues, both of which are open 24-hours making it perfect for when that craving strikes at 3am.

Also open all day and in the city centre, Fish@Bugis+ is the country’s only pawning facility that is indoors and has air conditioning - it also has a bar and fish spa too. Prawns are continuously poured into the ponds so you’re guaranteed the thrill of a catch and most venues offer barbeque or grilling facilities, so you can eat your prawns as fresh as possible.

RELATED: 9 experiences to have in Asia 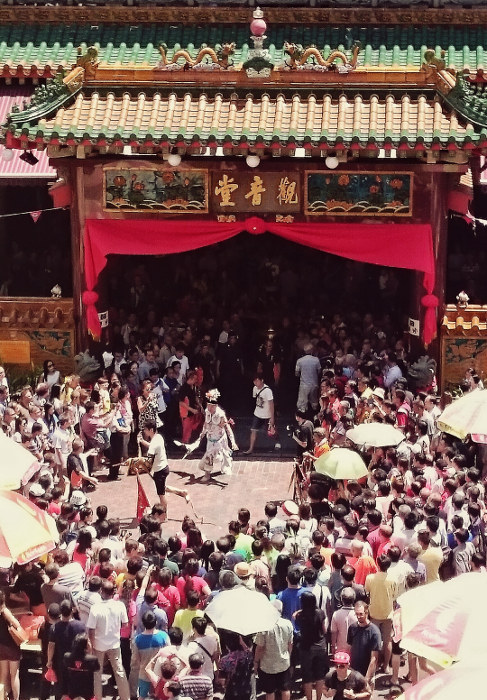 Kwan Im Thong Hood Cho is one of the most popular places in town to have your fortune told.

Get Your Fortune Told

Fortune telling is one of the oldest professions in the world and it still plays a central role in the Lion City. From Feng Shui masters, to tarot card readers to palmists, the fortune tellers here are as diverse as the culture.  And given the large Chinese population in the city, the superstitions and reverence for divination in China has found its place here too. Whether you’re seeking otherworldly counsel on relationships, want to win the lottery, or need a new job, there are countless fortune tellers who will (for a price) offer  a glimpse into your future.

Visitors should make a beeline for Waterloo Street’s Kwan Im Thong Hood Cho. One of the most popular temples in Singapore, outside it’s flanked by stores selling religious paraphernalia and fortune tellers proffering their talents. While inside you can partake in divination via simple fortune sticks - grab a Mandarin speaker, shake a cylinder of bamboo sticks, and then get them to interpret the reading.

Explore Singapore for yourself with our hot Asia deals on sale now.