Basking In The Kota Kinabalu Spotlight

Basking In The Kota Kinabalu Spotlight

Kota Kinabalu is booming. This is a provincial capital that is currently experiencing massive growth. From the air and driving through the streets, it's impossible to miss the cranes and scaffolding that dot the cityscape. There's a distinct buzz that makes visiting Kota Kinabalu particularly exciting. 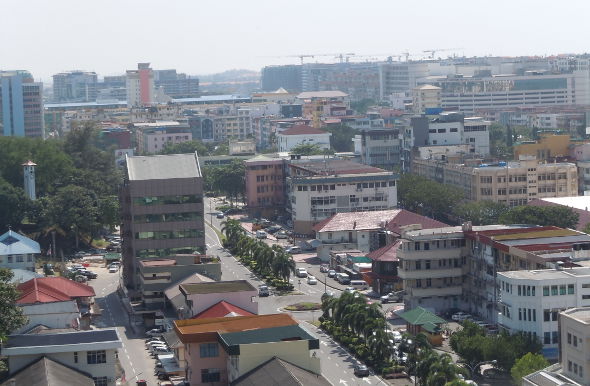 Adrian, a local tour guide, who's been with Borneo Eco Tours for the past 14 years, has watched the surge in development first hand.

"Over the past five or six years, Sabah has gone through a rapid rise in development with construction everywhere because of the buoyant economy. We have a lot of palm oil. Many people don't like it but there are a lot of the positive sides from palm oil such as the job opportunities and a better economy. If you sat at this spot for the past five years you would see things change every day. I go away for two or three weeks on tour and when I come back another new building is coming up," said Adrian.

We continue driving down the city's main artery and Adrian points out the Horizon Hotel.

"They are starting another structure here - next to the Horizon Hotel. Of course we are doing very well with tourism. Australians have supported us a lot. With the introduction of the Perth to Kota Kinabalu direct flight last year, we have actually a seen an increase of Australian arrivals to Sabah. I met five Australians coming from Perth this morning on the direct flight operated by Malaysia Airlines. Tourism is the second largest income earner after agriculture." 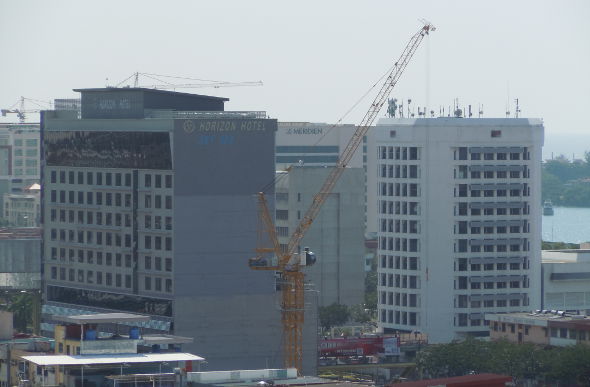 Construction next to the Horizon Hotel

Agriculture is the number economic driver for the Sabah economy, followed by tourism, with oil and gas coming in as the third major industry. While the Petronas Towers may be far away on the peninsula in the nation's capital of Kuala Lumpur, the shadow of oil prosperity is cast wide over Kota Kinabalu. But while the evidence is clear and visible, the locals seem somewhat unaffected by this prosperity - they are still as charming, friendly and welcoming as ever. There's a strong focus on the  family within their culture that seems to impart an earthy, grounded sense of being with the Sabahan.

For the tourist, the city's expansion is positive. After scaling Mt Kinabalu, the region's highest mountain or admiring the orang-utan in the famed jungles of Borneo, travellers can re-charge the batteries surrounded by modern luxuries. The markets are a great way to spend a leisurely afternoon and the nightlife options are plentiful. 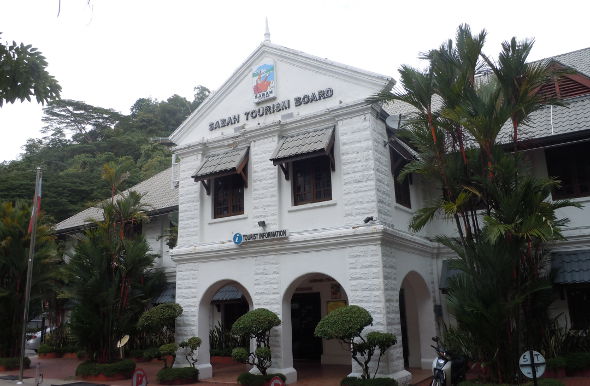 The only building to survive WWII

KK, as it's affectionately known, was completely flattened at the end of World War II. Only the Sabah Tourism Office and the 15.7 metre high Atkinson Clock Tower that was unveiled in 1905 were left standing after the allied bombing to liberate the region; both structures are worth admiring for the historic architecture. There's a part of the city known as Australia Place, appropriately named after the diggers that inhabited the area but the lodgings they called home are now lost. It was the British colonial government who choose to rebuild Jesselton, as it was then known as the capital of North Borneo in 1946, replacing Sandakan on the east coast, which had also been severely damaged during the liberation process. 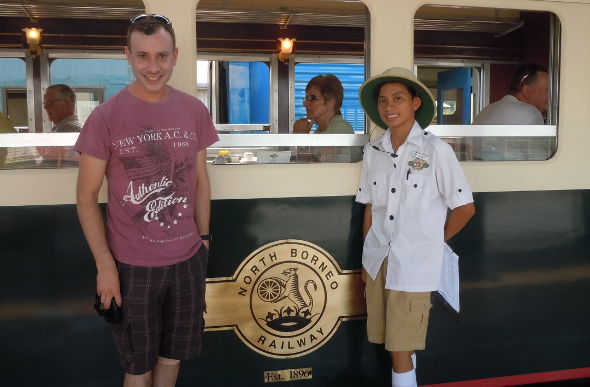 All aboard the North Borneo Railway

It's possible to channel the colonial period by signing up for the North Borneo Railway, a nostalgic journey on an original steam train that's been faithfully restored to give enthusiasts a sense of the bygone era. It's the theatricality of the event that makes it special - with train conductors dressed in period uniforms ringing the bell before departure and stamping our "passport" as we pass through the towns along the way.

As the economy continues to flourish, it was Singaporean Datuk Edward Ong who saw the potential in Sabah's capital several decades ago - in 1998 he constructed Sutera Harbour on reclaimed land. While the name itself sounds like a natural aquatic shelter - Sutera Harbour has become a brand synonymous with a complete holiday experience for whatever type of getaway travellers want to enjoy. 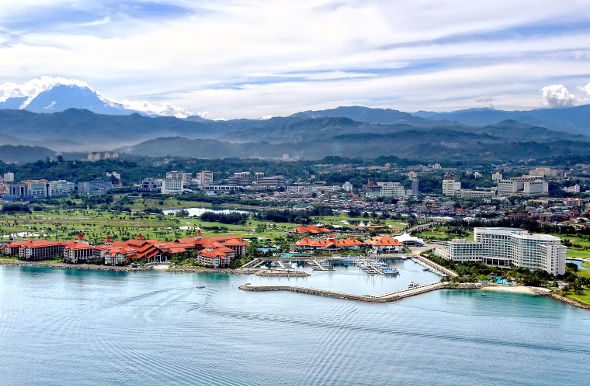 "We want to promote the whole property as a fully integrated resort. We can do business meetings, we can do honeymoons, weddings, family vacations and not just that - we also own five eco lodges including in the Kinabalu Park and the Poring Hot Springs. It's all in one - we cover the best of Sabah. People don't necessarily realise that Sutera Harbour is a group brand," said Ryazilah Rahim, Sutera Harbour's Marketing Communications Executive. 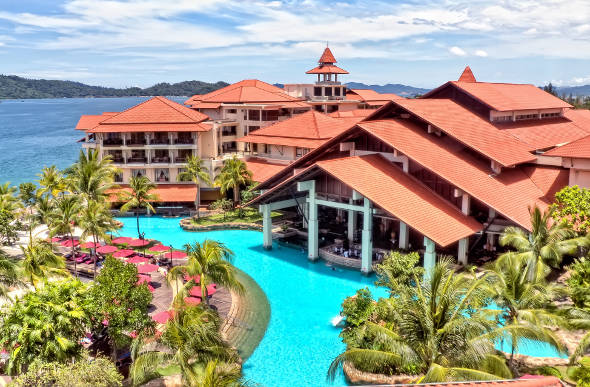 Magellan, within the Sutera Harbour Resort

In KK, the principle Sutera Harbour property is situated on 384-acres and features Magellan, a luxury beachside resort that's perfect for families, friends and couples, and Pacific, a functional business-orientated property. Budding Greg Normans are spoilt for choice with two 18-hole golf courses and one 8-hole course and there's also a Marina Club overlooking the picturesque waterway. And for the ultimate in relaxation the Mandara Spa is a Balinese inspired sanctuary where all your cares disappear. I thoroughly recommend the fully body scrub and massage.

Under the Sutera Harbour umbrella, there's also an eco resort with 20 chalets based on the nearby Manukan Island for travellers that want to chill by the beach and admire the local marine life.

"There's a diamond fish," said Jessica, Assistant Manager of the Manukan Island Resort, as we walk along the jetty from the boat.

"There's a Gar Fish but it's quite small. Sometimes you can see much larger fish. And that's a sea urchin - we have plenty of sea urchins here. We also have white-tipped sharks. On the island there are two beaches - there's one for in-house guests on this side and the general public who come just for the day use this beach. But both are great for snorkelling."

Manukan, is one five islands, classified by the Government as a marine national park. Recently the authorities have invested resources into helping the coral and marine life to flourish. While during the day the island receives considerable visitors, after the final boat leaves, those staying overnight essentially have the entire island to themselves.

"Would you like me to take you to sunset point?" Jessica offered.

How could I refuse such an invitation? We arrange to set off at 4pm later that afternoon, after I've had lunch in the restaurant and donned a snorkel to greet the fish directly.

Jessica and I walk for around 20 minutes along a paved track which we share with little crabs who dive into the protection of their host shells when they feel the vibrations from our feet. I'm told there are many snakes but today none decide to make the presence known. The path climbs to a lookout over the ocean before descending sharply down to sea level. I admire the fruit hanging from the Pandanus Trees that frame the outlook.

"Wild chickens live on the island. They run very fast. You can't see them but you can hear them. In Kadazan, we call chicken Manuk. Because there are many chickens here, that's why we call it Manukan Island," said Jessica.

"You see those two trees - at the point. They are mangrove trees. We are very lucky to have those here because there aren't many of those trees left." 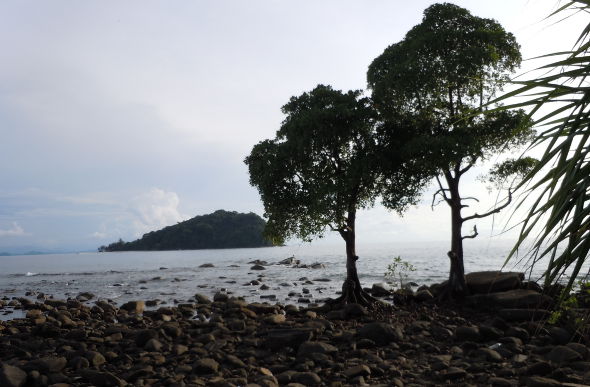 When looking across from Sutera Harbour to Manukan you can see the trees; a guiding beacon towards the island's scenic beauty.

We return back to the resort so that I can have a quick swim before dinner. And while this can be considered as a paradise island, I know that tomorrow morning I must take a boat back to KK to see again the signs of the burgeoning economy. For the moment, I treasure once more this pristine silence.