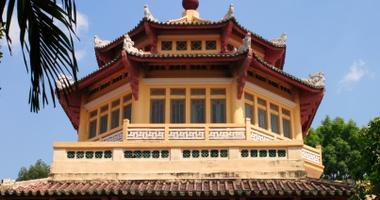 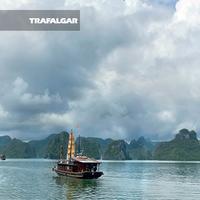 Float on the sparkling emerald waters of Halong Bay on a traditional Vietnamese Junk. Glide past hidden islets, giant limestone karsts and colourful...

Ho Chi Minh City is Vietnam's largest city, located on the banks of the Saigon River. The striking city was previously known as Prey Noko in the 17th century and Saigon up until 1976 when it merged with the surrounding Gia Định Province. Following the merge it was given the official name of Ho Chi Minh City after the previous Prime Minister and President of the Democratic Republic of Vietnam. Once known as the 'Paris of the East,' modern day Ho Chi Minh City is in the midst of shedding its imperial French label and moving forward to become a futuristic city that rivals Asia's major powerhouses.

Most large Ho Chi Minh cruises will disembark at Phu My, a port city located just over 12km from Ho Chi Minh City.

Many of Ho Chi Minh City's popular attractions revolve around the city's fascinating history. Start your journey back into Ho Chi Minh's past with a visit to the War Remnants Museum. The Museum of Vietnamese History is also a great site to view ancient antiquities. Get to know Ho Cho Minh's spiritual side with a visit to one of the city's numerous Pagodas including the city's oldest, the Quan Am Pagoda. Don't mind crowds? The Dai Nam Tourist Park is ideal for first time visitors.

Time your visit to the War Remnants Museum around lunch time. Located just outside are the Saigon Botanical Gardens and a number of semi-outdoor restaurants selling hearty Pho, a Vietnamese noodle soup.

The Reunification Palace is where the President of South Vietnam resided during the Vietnam War and where the last days of the war took place.

The phrase ‘Bao nhieu tien mot ve' is Vietnamese for 'how much is a ticket?'