Unless you've got a private jet, in-flight butler and pure silk onesie to wear while flying, chances are someone out there is travelling better. In a world of highly-paid celebrities, savvy entrepreneurs and brainy millionaires what hope do we have other than to simply gaze longingly at the flight path few can afford to take. 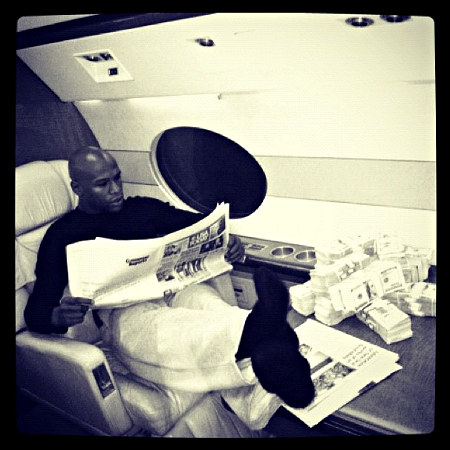 Floyd Mayweather kicking back on a private jet with enough cash for a few bags of in-flight nuts (image: @justinbieber)

International boxer Floyd 'Money' Mayweather was listed as the highest paid athlete in the world in Forbes' 2014 edition. It's no surprise then that he's jetting around on a private jet with more than the average yearly income sitting in hundred dollar bills on his tray table. One has to wonder why he can't afford better company than the Biebs. 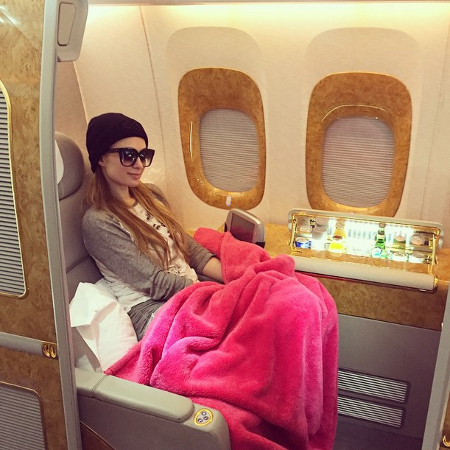 Paris Hilton gets cosy in her first-class seat, complete with minibar (image: @parishilton)

Now that she's an instagram ambassador for Emirates, Paris Hilton can look forward to many more first-class rides around the world. Is that a hot-pink snuggie!? 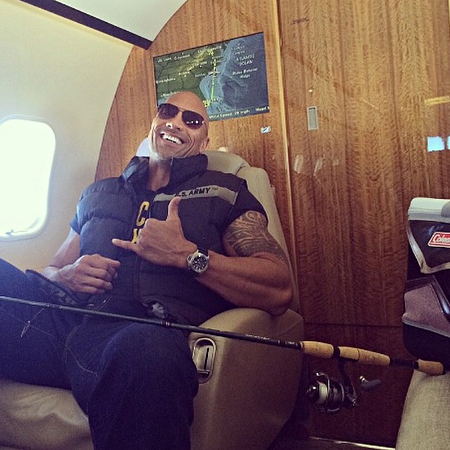 Judging by his mode of transport I don't think The Rock will be fishing from a tinny (image: @therock)

Former WWE wrestler turned Hollywood actor, Dwayne Johnson is the only person in the world who would charter a private jet to a family fishing trip. Whatever floats your boat Dwayne. 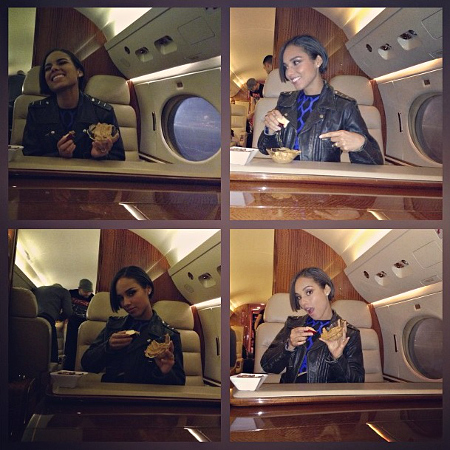 Alicia Keys is ecstatic over her in-flight snack (image: @aliciakeys)

When you're Alicia Keys, flying around the world includes a private jet and specialty requested in-flight snacks such as this peanut butter and apple concoction. I don't think I've ever looked that excited for airplane food. 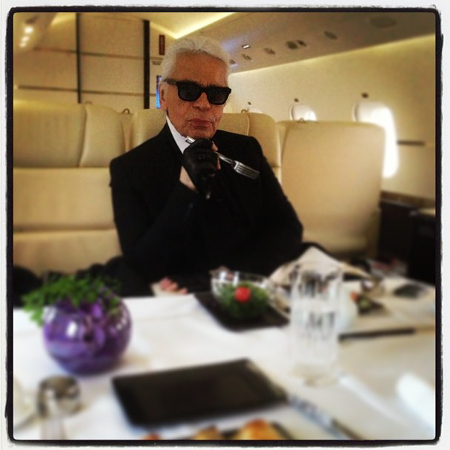 Apart from royalty (oh you'll see), Karl Lagerfield may be the most superior traveller of us all, making sure his private jet is stocked with all of life's necessities: caviar, alcohol, pets and a bed so he can "arrive fresh". For this eccentric fashion designer flying first class is a downgrade. 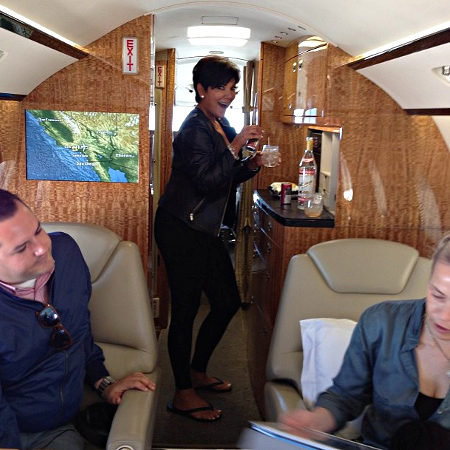 Kim Kardashian-West's mum Kris Jenner shows that there's one upside to flying economy: the flight attendants make your drinks for you. However, having to whip up your own cocktails while cruising the skies in a private jet is what we'd define as a 'good problem'.

Kick-start the luxury before you even board. Qantas Opens Brand New First Class Lounge In Los Angeles 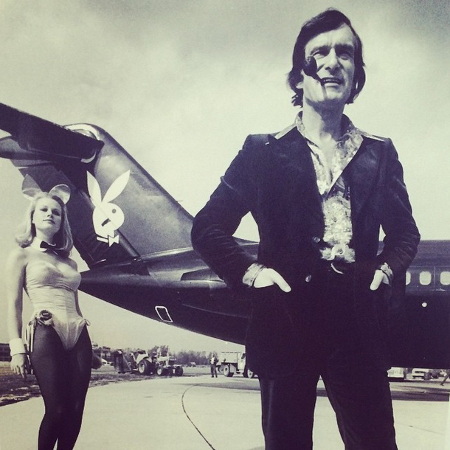 Hugh Hefner in front of the Big Bunny. He often had Playboy Bunnies working as flight attendants on board (image: @hughhefner)

The king of Playboy may no longer be flying in his private jet 'Big Bunny', but he certainly knew how to swagger on over the tarmac back in the day. Hugh's jet came fitted out with leather seats, televisions and a circular bed with animal-fur blanket. All this was back in the 70s, so you can imagine what the equivalent would look like today. 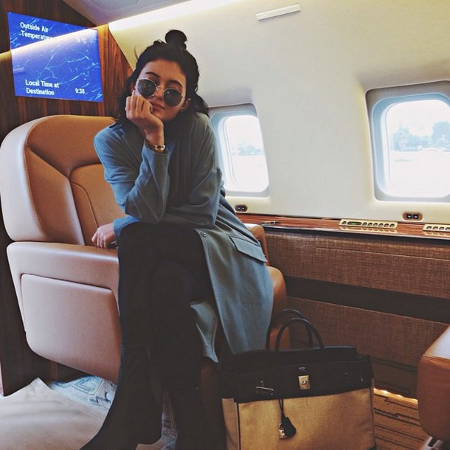 At 17 Kylie Jenner has amassed more private flights than most celebrities will in their lifetime (image: @kyliejenner)

Kris isn't the only Jenner living the luxe life. Her daughter Kylie, despite being only 17 years old, is looking very comfortable before taking off on her own private flight, possibly because this is one of many for the reality television star. 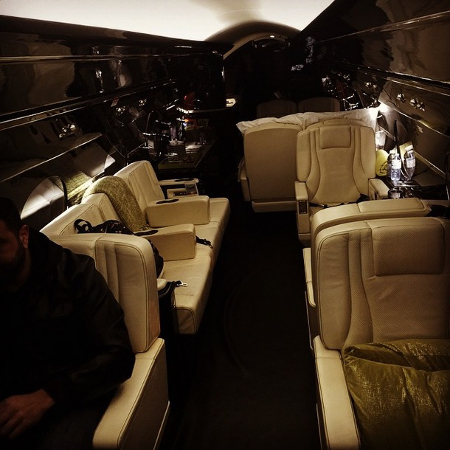 Justin Bieber's supposed jet-themed Christmas present to himself turned out to be a rental. To be fair, I just stopped renting my suits (image: @justinbieber)

By this point you might be feeling a little bitter towards your economy seat and the armrest hog next to you. Chin up people because even celebrities feel the need to fabricate their wealth. Justin Bieber recently posted this private jet pic to his instagram, while alluding that he'd purchased the plane. Turns out it was just a rental. Classic JB. 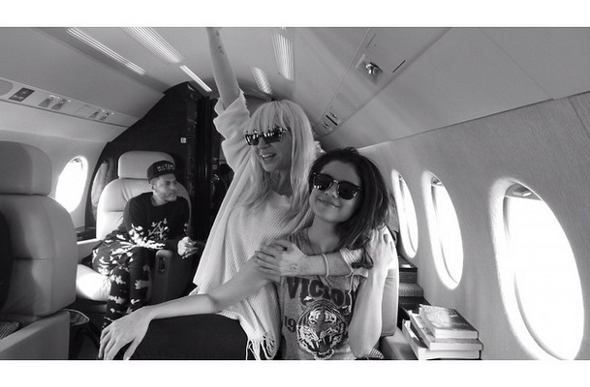 The jet-setting life with Selena Gomez and Sia (image: @selenagomez)

Selena Gomez brings her brand of cute and chilled out to the art of jet-setting while hanging out with Australian singer Sia. Lesson learned: private jets are more fun when you're with friends. 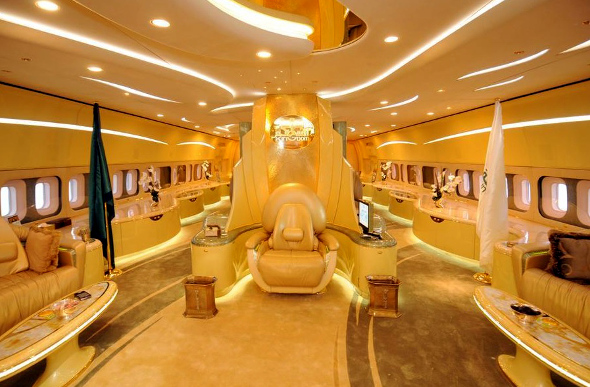 And the award for ridiculously exuberant travel goes to Prince Alwaleed (image: @WhatTheFFacts)

If Genie in Aladdin forgot anything during Prince Ali Ababwa's grand entrance from Princess Jasmine it was a freaking private jet with gold interior. Saudi prince Alwaleed Bin Talal Alsaud made the right decision in choosing the jet over a monkey-turned-elephant and is now in possession of arguably the most opulent means of air travel in the world. There's even a leather throne for Bin Talal to sit in while directing his commanding stare at you. 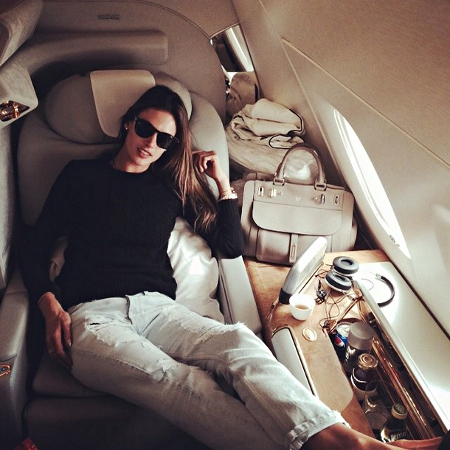 Brazilian model Alessandra Ambroso is as glamorous as her travelling style. Here she is feet up in her first-class seat aboard Emirates, considered one of the most luxurious airlines in the world.