Tweet
Read Time: 5.4 mins
Business travel, with its constant plane and airport time and all the late nights and early mornings, can take its toll on creativity and big thinking.
Sometimes, much like the computers we’re tethered to, we just need to hit refresh to keep going at 100%. And nothing helps faster to clear the cobwebs and get the creative juices flowing than a brisk walk, some time in nature or contemplating a pretty vista.
Blessed with kilometres of stunning coastline and vibrant cityscapes Sydney is jam-packed with picturesque locations and walks to recharge, start afresh and inspire big ideas.

Meander along the Bondi to Bronte Coastal Walk 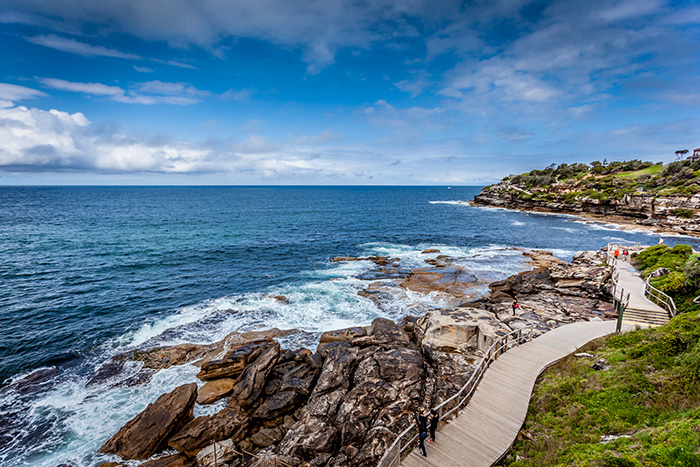 Bondi to Bronte and on to Coogee is one of Sydney's most picturesque and popular walks. Image: Getty
This is one of Sydney’s most popular coastal walks – and for good reason. Stretching 2.5km between two of Australia’s most famous and beautiful beaches, the walk winds its way along sheer sandstone cliff tops past Tamarama and Mackenzies Bay as the Pacific Ocean crashes on the rocks below. Keep an eye out for dolphins and whales playing in surf at certain times of year. The walk takes about 1.5 hours to Bronte (with stops) or another two hours if you have time to continue down to Coogee. 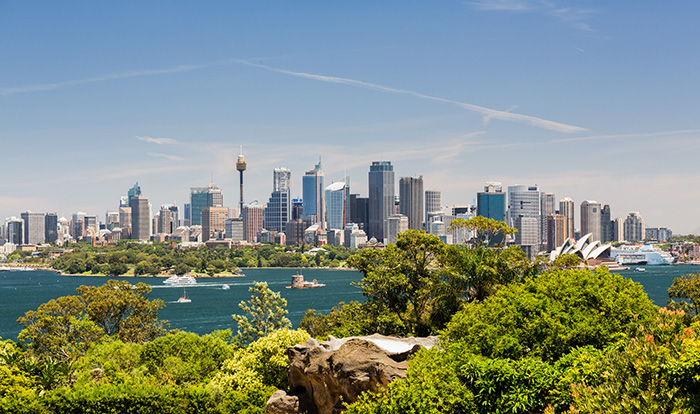 Sydney Harbour and the city in the background on the walk to Balmoral Beach from Taronga Zoo. Image: Getty
Though beaches are Sydney’s bread and butter, there’s no shortage of bushland spots dotted throughout this thrumming city. Set off from the Taronga Zoo ferry wharf making your way through the bushland and coves of Sydney Harbour National Park to Balmoral Beach to end with a swim in its placid waters. With spectacular views back to the CBD – including the Harbour Bridge and Opera House – you’ll also find historic fortifications in Bradley Head and Chowder Bay on the 6.8km walk.

The ferry ride from Circular Quay to Manly is perfect for a good dose of seafaring vibes thanks to the 30-minute harbour crossing. Stand out on the deck as the big commuter vessel cuts its way across the harbour for a healthy injection of sea spray and salt air, before disembarking in the village of Manly to explore the popular surf beach and coves around this beachside enclave.

One for the time-poor, Hyde Park is perfect for a short blast of nature and the outdoors. Throw on your runners and pound the pavement around this xx sqm CBD park or find a patch of lush grass for some sun-dappled contemplation before heading back into business land.

Stroll Barangaroo Reserve to The Rocks 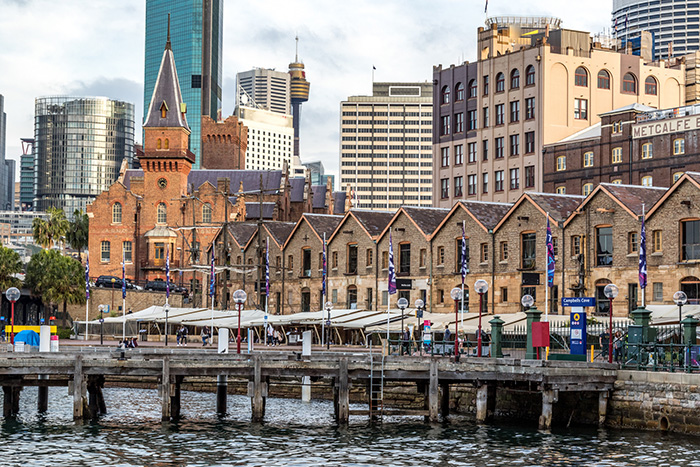 The Rocks is home to cobblestone laneways and historic old buildings made for exploring. Image: Getty
Starting in this lush park with views out across the harbour to North Sydney and finishing in the historic cobblestone laneways of The Rocks, this easy walk is as interesting as it is invigorating. Past Millers Point and the converted wharves (home to trendy eateries and creative institutions like the Sydney Theatre Company) continue under the bridge and through Hickson Road Reserve stopping to take in the view across to the Opera House and Kirribilli to the north-east.

A hub in its own right, Sydney’s second largest CBD is just over the iconic Sydney Harbour Bridge. Popular with business travellers visiting Crows Nest, St Leonards and the suburb of North Sydney, there are plenty of parks (try St Leonards and Primrose parks) and quiet spots to get rid of the work fuzz.

Plunge into a pool 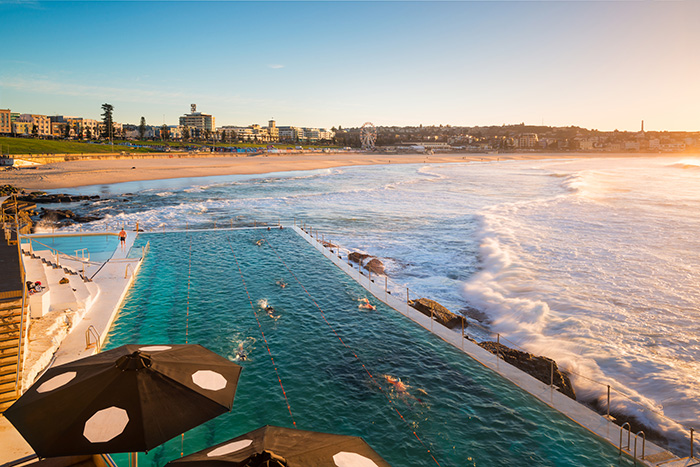 A morning or afternoon dip in Bondi's Icebergs is a refreshing way to start or end the day.
If you’re after an iconic dip in the water but don’t want to worry about waves, nothing says Sydney-living like like a pre- or post-work swim at Icebergs. Don’t worry if your digs aren’t well-placed to Bondi, Sydney is graced with a generous helping of watering holes and public pools to cool off at and smash out some laps. Wedged between Luna Park and the Sydney Harbour Bridge on Milsons Point, the North Sydney Olympic pool is easy to get to if you’re staying north of the city.

Learn about flora and fauna at Sydney Botanic Gardens

For an easy escape from the frenzied pace of downtown, strike out from the Pitt Street or Martin Place to Sydney’s Royal Botanic Gardens for a short back to nature session. Explore this inner-city oasis at your leisure; from impeccably manicured rose gardens to the herbarium and atrium, the Botanic Gardens is Australia’s oldest living scientific institution. For a self-guided tour, download a new app, Garden Explorer, and work your way through the “28,000 individual plants found in over 75 different countries, from 8,637 different species”.

Less than 20 minutes from the event and convention hub of Sydney Olympic Park (and Homebush), Lake Parramatta Reserve is a 73-hectare habitat popular for bushwalking and aquatic activities. Created in 1856, the manmade lake is home myriad walking trails and a range of facilities like barbecues, non-motorised boating facilities and designated swimming areas (with lifeguards on duty from late October to late March/early April). 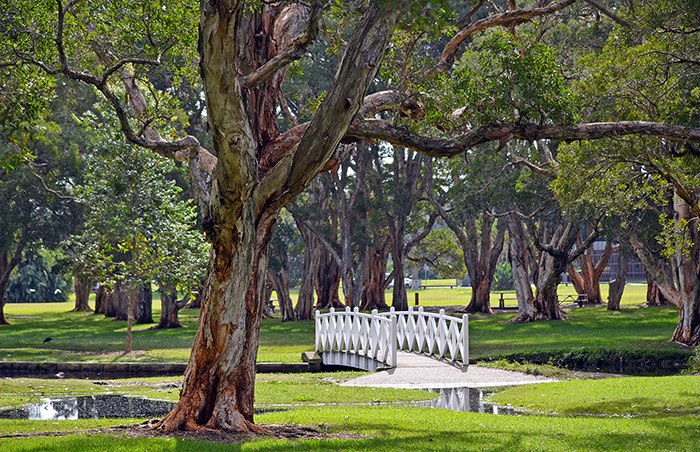 A peaceful scene in Sydney's Centennial Park. Image: Getty
Moore Park, home to Sydney Exhibition Centre, sits right next to the massive Centennial Park, is touted as the inner-east’s playground, or the People’s Park . Spread over 189 hectares, the historic park is brimming with gardens, lakes and ponds, bike paths (and bike hire), sports fields and historically significant sites to explore. For something different, try a horse ride through the park, run by the Centennial Parklands Equestrian Centre.

Need more information on travelling to Sydney? Check out our Travel Guide