The Best Places In London To Get A Coffee

The Best Places In London To Get A Coffee

It used to be tough to get a good coffee in London, which is surprising when you discover the city's history of caffeine consumption. In the 1600s, during the reign of King Charles I, 'black gold' fuelled debate in London's coffeehouses, much to the annoyance of the monarch, who tried to shut down these dens of dissent. After World War II, Italian espresso bars were all the rage and, following decades in the doldrums, when instant coffee, then identikit chains ruled the roost, a new wave of independent cafes have sprung up across the English capital, many of them run by baristas from Australia and New Zealand. When you’re in town for business, whether you're lusting after a flat white or a single-origin cold brew, these joints will cure your jetlag and have you on top of your game in no time.

This Kiwi-owned coffee king has spread its tentacles across London, with outlets in various nooks and crannies (you can even order Allpress coffee in the lobby of the St Mary Woolnoth Church near the Bank of England). The original Allpress espresso bar is hard to beat - perched on the corner of Redchurch Street and Club Row in Shoreditch - while the bigger Allpress cafe and roastery is set over two floors of a converted joiner's factory in trendy Dalston. The flat whites are reliably good, but the piccolos are a shorter, punchier alternative.

From grotty to glossy, few places in London have changed as drastically as Kings Cross. The rejuvenated area behind the train station, known as Granary Square, has morphed into a hub of top-notch food and drink, with Caravan the go-to place for artisan coffee. Occupying an old Grade II-listed Victorian grain store, this cafe-roastery sports high ceilings and industrial-chic decor and a front terrace that's a lovely place to sit, nursing a macchiato or an iced latte, when the sun's out. You can also order a coffee to go and lounge on the grassy steps that cascade down to the Regent's Canal, where you can watch idyllic narrowboats float by.

Talking of flat whites, this antipodean affair was at the forefront of London's caffeine renaissance when it opened in the Berwick Street Market area of Soho in 2005. It's still going strong, luring a stream of tourists and local creatives with its standard double-shot coffees and Aussie and Kiwi-style breakfasts and brunches, such as smashed avocados on toast and bagels with Vegemite.

Department of Coffee and Social Affairs

Discerning caffeine addicts swear by this coffee connoisseur, which has branches scattered around London, including Spitalfields Market, Canary Wharf and Whitechapel. The original Leather Lane cafe, in Clerkenwell, has a special charm, though, with exposed brick walls, soothing background music and window seating that lets you observe the action of the street market outside, where amid stalls laden with fruit, flowers and veg, punters and traders exchange pounds and earthy banter.

RELATED: Looking for an alternative route to London? The verdict on the first Perth to London direct flight

One of London's most celebrated department stores, Harrods has embraced the third-wave coffee bandwagon. As part of the restoration of its historic food halls, this Knightsbridge landmark has unveiled a new bakery, patisserie and coffee roastery, which is overseen by master roaster Bartosz Ciepaj, a finalist in the UK Roasting Championship 2017. Try the Harrods Signature Roast - a full-bodied offering that uses 100% arabica beans from Colombia, Brazil, Costa Rica and Sumatra and has notes of chocolate and caramel.

Popular for both breakfast and lunch, Aussie-and-Kiwi-helmed Kaffeine has two branches in Fitzrovia, a five-minute walk from Tottenham Court Road Tube station and the shoppers' haven that is Oxford Street. Expect minimalist decor with deli-style salads and sandwiches, and enticing sweet treats like peach and blueberry muffins and Anzac biscuits. To make coffee like they do at Kaffeine, you can sign up for courses that'll teach you how to make the perfect brew while improving your latte art skills. 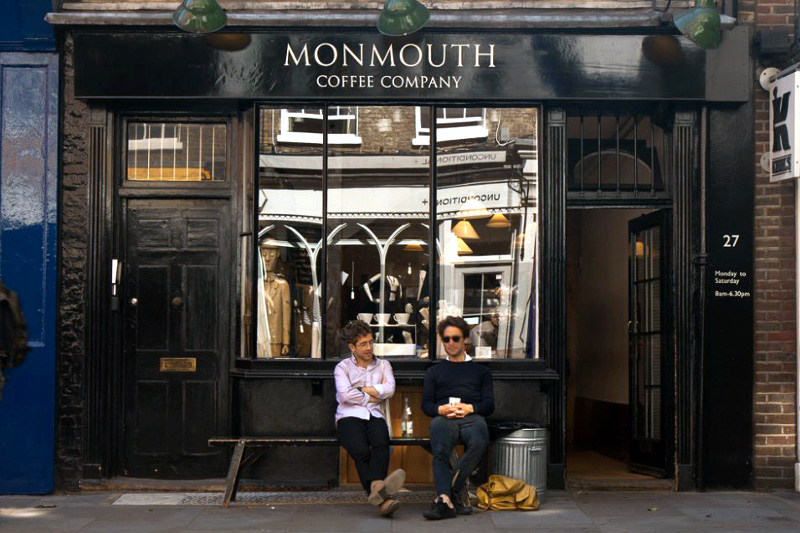 During the bleak times, when London's coffee scene was at its nadir, Monmouth Coffee Company was a beacon, importing and roasting quality beans from farms, estates and cooperatives from across the globe. Despite increased competition nowadays, this London icon, established in 1978, still attracts healthy queues, which snake out of its shops on Monmouth Street in Covent Garden, and also on Park Street close to Borough Market.

RELATED: Are you the new kind of business traveller?

You'll struggle to get more hipster than this cosy spot, which is situated in an increasingly gentrified backstreet in Hackney, east London. Nestled between a hair salon and a vintage shop, The Wilton Way Cafe shares its space with a local 'micro' radio station and podcast producer, London Fields Radio, and serves smooth flat whites using beans sourced from Hackney roasters Climpson & Sons. The food menu features ingredients from London's best markets and includes the likes of organic bircher muesli with apple, honey and Greek yoghurt, and grilled Portobello mushrooms on garlic toast with Herefordshire goat’s cheese.

This tiny, Aussie-run gem - founded by an ex-Kaffeine barista - draws a diverse crowd, from suited-and-booted workers to Harry Potter fans (Leadenhall Market, which doubled as Diagon Alley in the first Potter film, is round the corner). This 'studio' has a mini-gallery feel, with art on display, but most eye-catching is the coffee-making paraphernalia (think: AeroPresses and glass percolators), which help produce some of the tastiest coffees in the City of London. There's a larger offshoot, the Curators Coffee Gallery, near Oxford Circus.

If you're hankering for an old-fashioned cappuccino, look no further than this Soho stalwart, which is situated across the street from Ronnie Scott's Jazz Club. The air in this retro, neon-lit cafe is espresso-scented pretty much around the clock (closing at 5am and reopening at 7am), and as well as coffee from the Gaggia machine, you can order a Peroni or an aperitif, perhaps with a panini or tiramisu. Browse the Italian-flavoured decor and photographs and autographs of famous ex-patrons (which include Paul McCartney and David Bowie), or grab a table out front to peruse the streetlife of Soho, one of London's liveliest 24/7 districts.

The Best Bali Resorts You Can Stay At
21 November 2019
Need a holiday that’s an easy getaway, where you and the kids (or your other half) can kick back and relax with a dose of culture and beachside
Read Time: 7.0 mins