Top Spot For Tea At The Shard

Top Spot For Tea At The Shard

Could there be a better eyrie from which to sip afternoon tea? With picnic rug underfoot and clear blue skies above, yesterday evening I settled down to one of the first Fortnum & Mason afternoon teas to be served at the peak of London’s Shard skyscraper, some 244 metres above the city.

The tea takes place in a pop-up approximation of an English country garden, currently occupying the uppermost, 72nd floor of the View from the Shard, the building’s three-level observatory. The incongruity of the setting means it doesn’t quite convince as a bucolic idyll, but organisers have gone to some effort to ensure it looks the part.

Forming a colourful border against the Shard’s tapered window panes, some 2,000 plants (poppies, fox gloves, marigolds and more) have been bedded in 10,000 litres of soil, (artificial) grass provides a vividly green carpet and deck chairs are in place for those who might want to indulge in a sugar slump-induced post-tea snooze, or just admire the views. 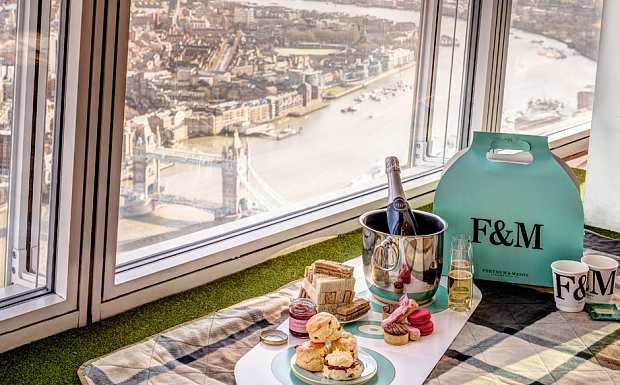 And what views they are. Visiting with a friend for the 6pm sitting, the last of the day, we approached our pitch as the sun, cutting dazzling beams through obstinate banks of cloud, cast a spotlight over London’s motley landmarks.

To the east glinted the towers of Canary Wharf, across the Thames the Tower of London stood steadfast and, further along the meander of the river, the distinctive silhouettes of St Paul’s Cathedral, the Houses of Parliament, London Eye and Battersea Power Station perforated the skyline.

You can, supposedly, see for 65 kilometres or so from the top so it’s no wonder so many fleeting visitors to London make a pit stop here.

What we hadn’t anticipated is that at times we’d feel like we were on show too. Until September 8, tea is served daily at midday, 1.30pm, 3pm, 4.30pm and 6pm; only two people are allowed per picnic blanket, of which there are just four – one in each corner of the room. 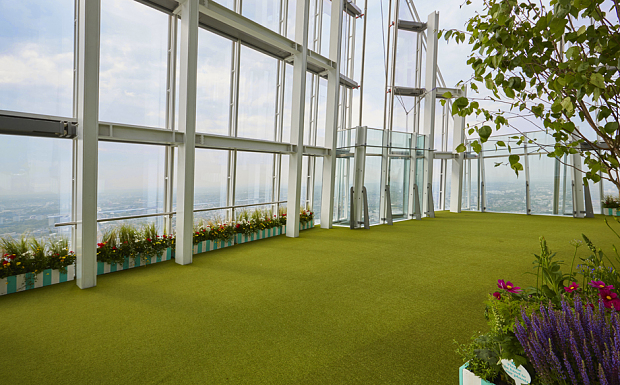 We felt somewhat self-conscious as we positioned ourselves on the ground. For the melee of families, amorous couples and Instagramming teenagers circling the floor we no doubt confirmed foreign stereotypes that Brits will indeed find a way to drink tea at any given time and in even the most unlikely locality.

As for the tea itself, it’s a fairly rudimentary affair and not quite the elegant F&M experience you might anticipate. Our tea was presented in a box, prettily branded but nonetheless plain cardboard, that was unfolded to provide placemats and holders for the sundries therein.

Products are made daily at Fortnum & Mason in Piccadilly and driven to the Shard throughout the afternoon, but still the sandwiches we tried – staples such as salmon, coronation chicken and cucumber – had dried somewhat, and the diminutive scones, to which we applied vacuum-packed cream and jam with a spork, didn’t distinguish themselves. We drank our tea from Starbucks-style takeaway cups and, to finish, we were served four dainty, different pastries to share.

In terms of taste, there are better afternoon teas on offer in the Shard: Aqua Shard restaurant serves a classic version on the building’s 31st floor, and the Shard’s Shangri-La hotel serves British- and Asian-style afternoon teas from its 35th-floor restaurant Ting. Some consider the views there better too – though the panorama of greater London and its surroundings is diminished from these levels, the city centre’s most significant landmarks seem grander, their multifaceted features and flourishes more pronounced.

That’s if you’re seated by a window, however, and once reasonably sated we were able to join the crowds roving the observatory’s floors for a post-prandial sunset stroll.

Though the tea itself didn’t match the vista, admiring the capital at our leisure seemed a most appropriate way to conclude what is, after all, the most indulgent and inimitably British of meals.