The Best 5-Star Hotels In Brisbane

The Best 5-Star Hotels In Brisbane

Brisbane has enjoyed something of a renaissance in recent years. Long known for its idyllic climate, laid-back locals, colonial architecture and iconic river, Queensland’s capital is now also famous for a burgeoning arts and culture scene that features an eclectic array of music venues, galleries and bookshops.

Combine that with an abundance of open green spaces, such as the City Botanic Gardens and Roma Street Parkland, and you have a modern metropolis that is exciting and peaceful in equal measure.

Here’s a list of top hotels to choose from when you make Brisbane your next holiday destination.

Sofitel Brisbane Central sits in the middle of the city, right above Central Station where regular trains transport visitors around the city. All 433 rooms are adorned in refined neutral tones with hints of charcoal and chocolate, giving the hotel an elegant and old-fashioned chic ambience.

Sofitel offers a gymnasium, outdoor pool, beauty and hair salon, and spa with seven treatment rooms, along with meeting rooms and conference facilities.

Guests have four dining options including the French-inspired cuisine of Prive249 and the more bistro-style fare of Harlequin Jack. 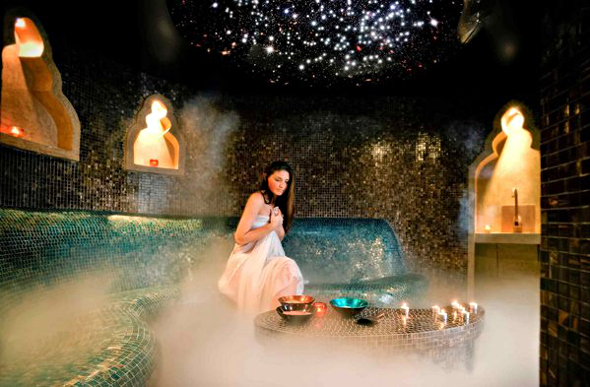 Unwind with one of the spa treatments at Sofitel

Located in the inner-city enclave of Kangaroo Point, The Point is a three-minute stroll from the banks of the Brisbane River. Guests can ride the CityCat ferry to the CBD, South Bank, Fortitude Valley and West End, all excellent dining and entertainment areas.

Enjoy either river or city views from a choice of studios or suites. The hotel’s own Lamberts restaurant, lounge and bar features both Australian and international cuisine. One of the hotel’s newest features is the Eagles Nest rooftop bar, which boasts sweeping vistas over the city and beyond.

The Point has everything expected of a 5-star hotel plus much more. A heated outdoor swimming pool, gymnasium and even a pillow menu are the little, but memorable touches of luxury.

Brisbane's Sofitel Hotel: A Destination In Itself

One of the most attractive features of Stamford Plaza is its position on the bank of the Brisbane River. This hotel is especially popular with sports fans. The Gabba, Suncorp Stadium, Eagle Farm and Doomben race tracks, and Royal Queensland Golf Club are all nearby.

The Stamford offers a heated outdoor pool, spa and sauna, sun deck and fitness centre. Guests are spoilt for choice with dining and drinking options, from high tea to Japanese teppanyaki. 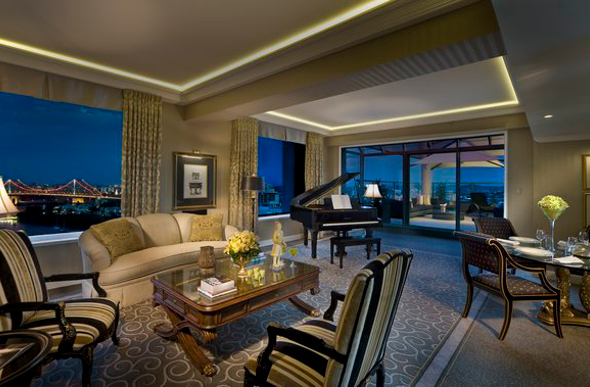 The Marriott's rooms offer fine views of both the city skyline and river. Each one features marble bathrooms and 300-thread-count sheets, with packages ranging from guest rooms to executive-level accommodation.

There is an elaborate spa retreat along with a fitness centre and swimming pools for both adults and children. Architecture by iconic designer Harry Seidler gives the hotel's interior and exterior an added touch of elegance.

The Marriott is a short drive from South Bank and an easy walk from Central Station. Queen Street Mall is two minutes on foot.

Situated on Queen Street Mall, the Hilton is minutes from basically everything you need to enjoy a Brisbane holiday, particularly the Queensland Gallery of Modern Art and South Bank.

Amenities include an outdoor swimming pool, well-equipped gymnasium and tennis courts. Although there are 319 rooms, the best choice for luxury is the Executive Room, which grants you access to the Executive Lounge with complimentary breakfast, drinks and canapes. 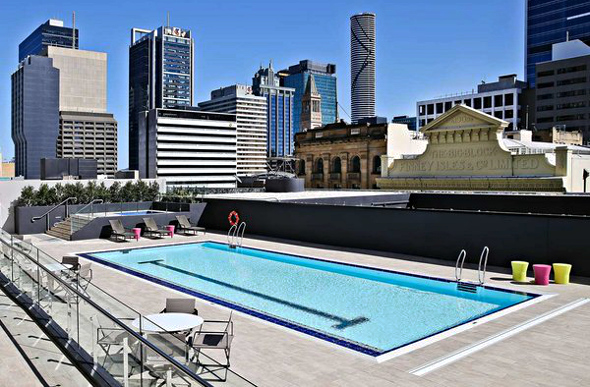 Swim above the city at Hilton