7 Days In The Heart Of Middle-earth

7 Days In The Heart Of Middle-earth

When Angela Mollard and Rory Gibson attempted to walk the Routeburn Track, New Zealand’s weather forced them down some different paths. These unplanned moments led them to some of the country's most rugged and wild regions, where they encountered the adventurous and beautiful sides of NZ.

It was a true journey into the heart of Middle-earth, highlighted by breathless moments in Narnia-esque scenery, a tremendous blizzard and well-deserved Trappist beer.

New Zealanders will tell you that 'tramping' is simply another name for hiking but, in truth, it’s a reference to how one looks – and smells – after a few days in the bush. So a trip to the toiletries aisle of the supermarket in Queenstown shortly before we set off to walk the Routeburn Track was essential.

I chose scented wipes. Rory changed them for unscented. Men don’t realise that on such small acts an entire holiday can hang.

Fortunately he spotted me eyeing off the two-litre cartons of shiraz and put one in the trolley. I hoped he’d carry it in his pack. In any case, we’d need hard liquor to keep us warm because the Land of the Unpredictable Weather System was dumping snow. In April!

I’m not kidding, there was a full-on blizzard happening in Queenstown. Snow was blinding me as it was driven horizontally by the gale pummelling the pretty South Island town. I’m from Queensland, not Queenstown. I don’t see a lot of snow.

I didn’t think my Billabong hoodie was going to be adequate for this trip. I was so happy to get on the warm bus to drive to the start point of the track, what’s called the Routeburn Shelter. No one would notice if I didn’t get off it.

Go with the snow: Skiing New Zealand's Back Country

What Middle-earth is made of: Exist In A Fantasy With A Visit To Hobbiton

Walking the 6.5 kilometres from Routeburn Shelter to the first Department of Conservation (DOC) hut was like opening a wardrobe into Narnia. Ferns and beech forest were transformed into an ethereally silent winter wonderland.

We crossed swing bridges and passed the Bridal Veil Stream, arriving at the cosy hut by late afternoon. At the table a young couple were drinking tea from a plastic Coke bottle sawn in half. “He forgot the cups,” she explained, gesturing to her sheepish companion. 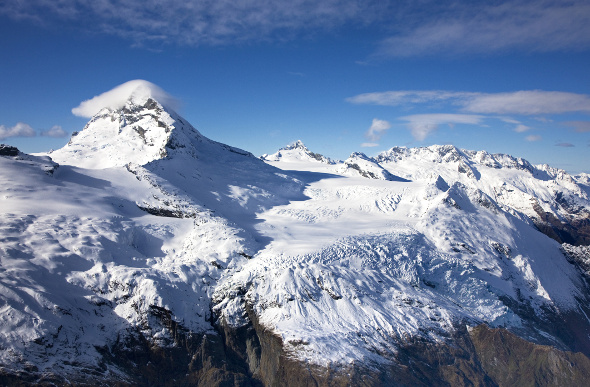 Snow, when not machine-gunning your face and giving you hypothermia, is very beautiful. I’ll grant you that.

The forest covering the valley slopes was frosted with the stuff, as were the towering peaks of the Mount Aspiring and Fiordland national parks, through which the track winds. The wind had gone and in its place was a silence broken only by the sound of alpine-clear water tumbling over snow-dusted rocks. Being there was worth the frostbite.

I love the innovation of the pair who forgot cups. They enjoyed their drink as if it were sipped from a crystal goblet.

New Zealand’s DOC huts, many staffed by park rangers, provide excellent shelter on the country’s eight great walks but sadly they’re not snore-proof. Simon, from Auckland, was enjoying a few days away from the missus and I daresay she was enjoying her sleep, free of her foghorn fella.

Sadly, adenoidal interruptions were to be the least of our worries because overnight black ice and the avalanche risk posed by heavy snow had closed the next section of the track. We walked a few kilometres up to the next hut and watched the guided walkers, aka lucky rich bastards, enjoy a helicopter ride across the 11-kilometre closed section. The question was whether to sit it out or return to a warm bar in Queenstown. 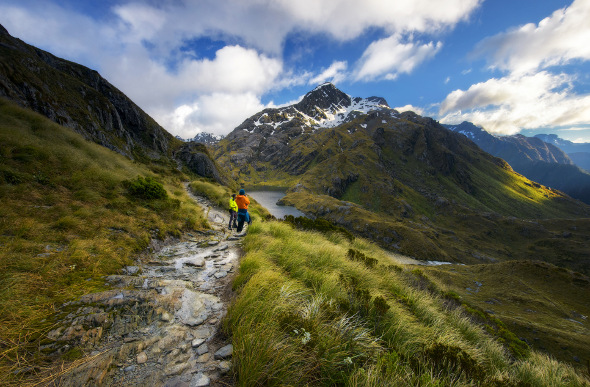 The Routeburn Track is rated in the top dozen hikes in the world. It is an old Maori trail between two sources of prized greenstone, the Dart Valley and the Arahura River on the West Coast.

It is a visual feast of alpine lakes, meadows and peaks, and I was desperate to see it. Bloody snow. What was beautiful yesterday had turned treacherous overnight. There was nothing we could do, though. We had to go back to Queenstown.

There’s so much to do in Queenstown that it really does require a good few hours in a lovely, fire-warmed bar to decide where to begin. Rory cracked into some beer made by monks in some obscure Belgian bog while I attacked the excellent 42 Below range of flavoured vodkas – Feijoa was the winner, closely followed by passionfruit.

Eichardt’s, a Queenstown icon since 1867, has a glorious view over Lake Wakatipu and fabulous orange-scented hand cream in the bathrooms. Or maybe that was the vodka.

Woo hoo! Eichardt’s had a stock of Chimay blue label Belgian strong ale, one of only seven true Trappist beers in the world. You’ll note I said "had".

Queenstown should be rebranded THE TOWN WHERE YOU CAN KILL YOURSELF IN 100 WAYS. You can bungy jump, jet boat in sheer-walled canyons or white-water raft down perilous rapids.

We took a jet boat ride down the Kawarau and Shotover rivers, marvelling at the views up to the glistening ski fields of Coronet Peak. And because all good travel is yin and yang, we backed it up with a gentle cycle ride round the shores of the lake.

OK, it wasn’t gentle – but the 18-kilometre cycle from the town centre around the lake to the local golf course is the stuff of the 100% Pure New Zealand adverts. 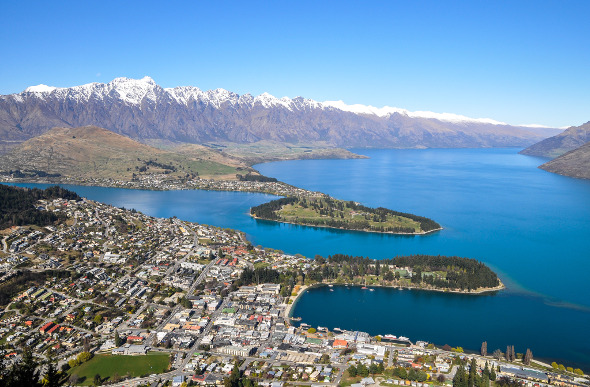 Get your thrills in Queenstown. Picture: Getty Images

I could live here. It’s my kinda town. So earthy and adventurous. The first thing I saw in the main drag along the harbour when walking into Queenstown from our apartment was a ute with a deer strapped to the back of it, the stag destined to provide the hunter with weeks of tasty venison hot-pot.

That ute would be firebombed in Australia by someone objecting to something – hunting, eating meat, using a ute for something practical ... I don’t know, I can’t keep up with all the causes these days. No one blinks about such things there.

Everywhere we turned in Queenstown and surrounds, people were getting married. In glorious Arrowtown, a young couple were smiling artfully in front of a backdrop of autumn splendour.

Rory, much-practised in the role of groomsman, realised it wasn’t the real deal. Clearly Asian travel operators spruik weddings in New Zealand and April is the month they shoot the catalogues.

As the poor model shivered in her gown, we strode along the Arrow River Trail before repairing to Patagonia Chocolates for the most delicious hot chocolate ever to pass my lips.

If I were a bride and my new hubby made me stand around in a flimsy wedding dress in almost Arctic temperatures while a hipster photographer took endless photographs, I’d show him what Arctic really felt like.

If Queenstown is the place where you feel compelled to do stuff, Wanaka is the sidekick where it’s great to chill out and not do stuff. After the obligatory brunch and walk we settled in to the Lake Bar to watch the rugby and play pool. I almost won.

Back in Queenstown after dinner at the Botswana Butchery – excellent slabs of meat, fantastic pinot noir – Rory took me to the Sky Casino for a masterclass in blackjack, aka lose all your money in 10 minutes. 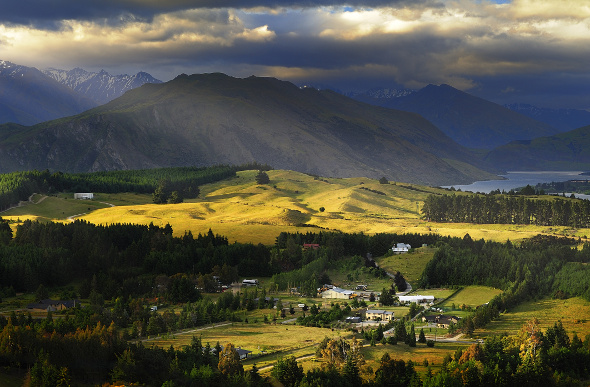 Wanaka, not a bad place to chill out. Picture: Getty Images

You can’t play blackjack with any success when someone is saying “Why did you do that?” every time you pull a card.

Having been forced off the Routeburn Track, we attempted to do a 'make-up' walk. We tried the Lake Dispute Walkway, the dispute being whether we should actually do it. Of course, it poured down. Sigh.

Still, it gave us the chance to try out a Ferg Burger, a Queenstown institution. I left Rory with strict instructions to order me a brekky burger with avocado while I fetched coffees.

“They’re out of avos,” he told me on my return, “so I got you one with a hash brown.” Really? A hash brown in a burger? I hate to say that boys know best but, er, it was delicious.

You may have won this time, weather, but lucky for you Queenstown is a good place to defrost. We’ll get over that mountain pass eventually, you’ll see.