7 Cool Places To Get High In London

7 Cool Places To Get High In London

Since the turn of the millennium, the London Eye has lured crowds with its breath-taking bird's eye views of the British capital. But if you've already ridden it – or loathe lengthy queues – don't worry.

There are plenty of lofty alternatives. In recent years, a spate of glossy high-rises has mushroomed across London, and several old towers have been repurposed, giving vista-hungry locals and tourists cool new spots from which to absorb the city's famous landmarks and constantly evolving skyline. 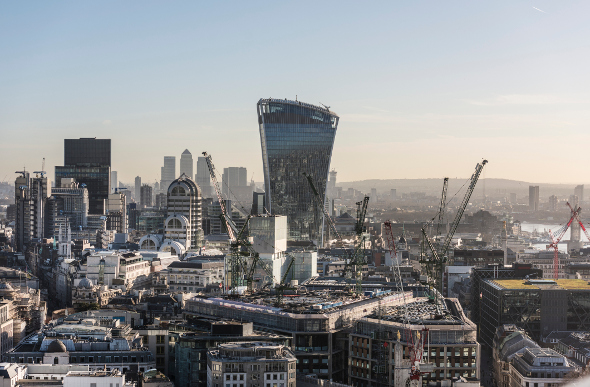 Looming over the elegant old buildings of the City of London financial district, 20 Fenchurch Street is better known by its moniker The Walkie-Talkie. Billed as London's highest public garden, its lush, landscaped Sky Garden occupies the top three floors of this bulbous, 160-metre skyscraper.

You'll find 360-degree London panoramas and a clutch of enticing wining and dining choices: the Darwin brasserie, Fenchurch Restaurant (serving contemporary British cuisine) and Sky Pod Bar. Evenings are especially popular up here, so book a table well in advance (or a free ticket if you're just wanting to chill in the Sky Garden). 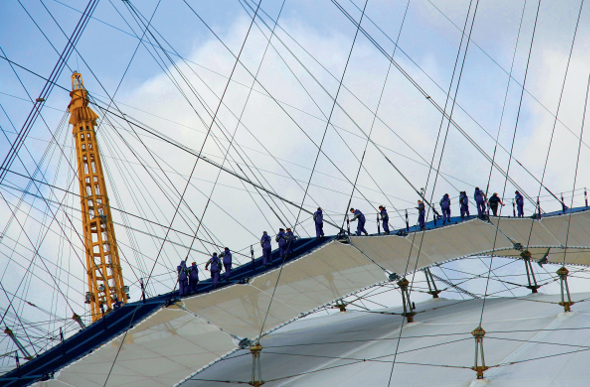 Take a guided expedition at Up at the O2. Picture: Visit Greenwich

Touted as 'urban mountaineering', Up at the 02 is a mildly calf-and-thigh-straining jaunt to the summit of North Greenwich's giant entertainment venue. The shiny towers of Canary Wharf, the maritime Greenwich UNESCO World Heritage site and the snaking River Thames are among the arresting sights.

The guided expedition spans 90 minutes (including preparation – you'll need to put on a climb suit, boots, harness and latch). For photos sure to impress friends and family, scale the O2 at sunset. 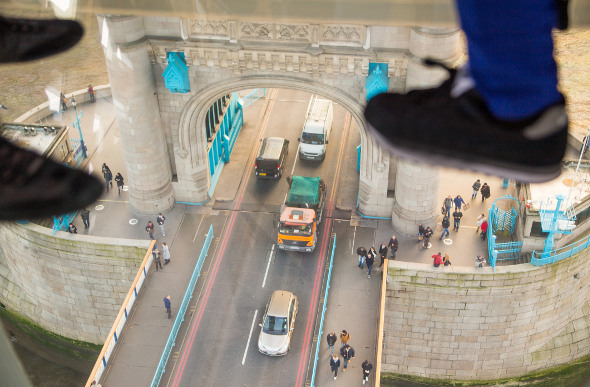 One of London's most iconic structures is proudly sporting a vertigo-inducing makeover. Perched 42 metres above the Thames, the upper walkways of Tower Bridge now have a spectacular glass floor.

Measuring 11 metres long and 1.8 metres wide, it's part of the bridge's award-winning exhibition space. Treading the sturdy glass panels, visitors can look down to spy pedestrians and traffic (including those red London buses and black cabs) whizzing over the bridge. The highlight is when the bascules are raised beneath your feet, allowing river vessels to sail under the bridge.

Tube-tastic: London Gets On The Night Train

The View From The Shard 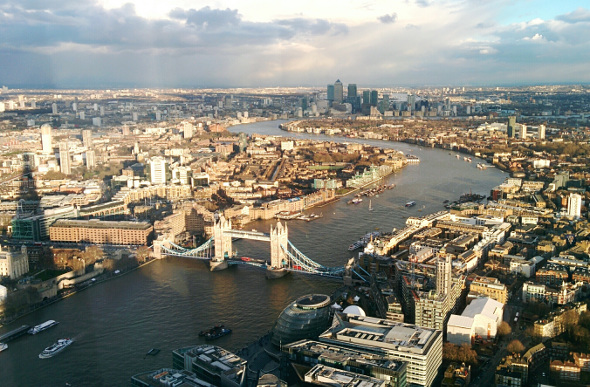 The view from the Shard across London. Picture: Getty Images

The tallest building not just in London, but in western Europe, the Renzo Piano-designed Shard makes a dazzling impression inside and out, with its 244-metre vantage point offering unrivalled views (it's apparently twice as high as any other lookout in the city). Interactive touchscreen telescopes provide information about 200 London landmarks and give alternative day, night, sunrise and sunset views.

If visibility is poor and you can't see at least three of the following sights – London Eye, St Paul’s Cathedral, The Gherkin, Tower Bridge and One Canada Square (Canary Wharf) – you'll get free tickets to return within three months. 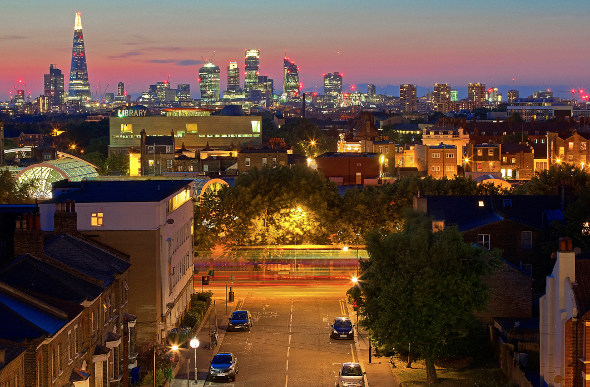 The view from the Bussey Building gives Frank's a run for its money. Picture: Getty Images

Once synonymous with Del Boy and Rodney from the British TV sitcom Only Fools and Horses, Peckham has become super-trendy. It's thanks, in part, to Frank's Cafe, a summer pop-up that sprouts on the 10th floor of a disused multi-storey car park.

As well as granting a perspective of London from five kilometres south of the river, it dishes up an al fresco fusion of art, music, theatre, film, literature and food and drink. If Frank's is packed, hit the rooftop bar and cinema of the Bussey Building, a year-round arts space that's also on Peckham's buzzing Rye Lane. 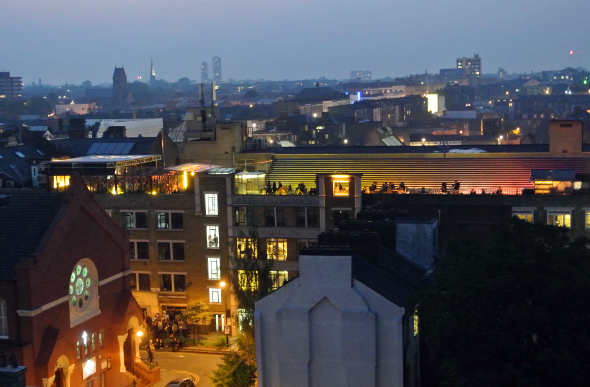 Dalston Roof Park is the place to be in summer.

Summer also sparks Dalston Roof Park to life. Blessed with flower-filled baskets and bunting fluttering in the breeze, this AstroTurfed hangout caps a former stationery warehouse in Dalston, one of east London's hippest neighbourhoods. There are deck-chairs on which to lounge, mojito or caipirinha in hand; a covered dance floor to groove away to DJ tunes and other cool things to savour, including pop-up food ventures and sunrise yoga sessions. 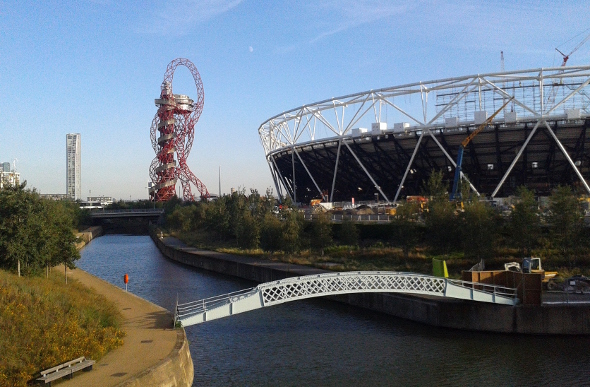 Try out The Slide at The Orbit Tower.

Masterminded by British artist Anish Kapoor, the country's largest sculpture graces the Queen Elizabeth Olympic Park in Stratford. Its observation balconies afford captivating panoramas of London, but you can make things more interesting by signing up for one of the tower's adrenaline-fuelled activities.

If abseiling down this twisting red tower doesn't appeal, how about taking The Slide? Unveiled on June 24, it's promoted as the world's highest and longest tunnel slide and circles this east London landmark 12 times, descending 178 metres in 40 dizzying seconds.