Add Some Hollywood To Your Holiday In Thailand

Add Some Hollywood To Your Holiday In Thailand

Hollywood loves Thailand for its beautiful scenery, which can be anything from dreamy to dramatic. Follow the cues of the movie moguls if you want a vacation in Thailand that comes complete with your very own big-screen backdrop… 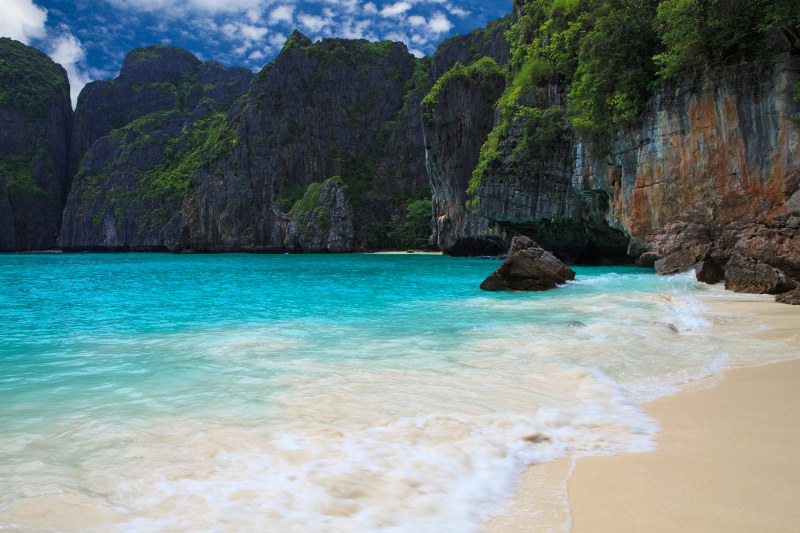 These days, Thailand’s probably best known across the globe by Hollywood’s attempts to depict the ultimate hippie paradise there. Starring a young Leonardo Di Caprio, movie producers found one of Thailand’s most pristine beaches and turned it into a closed movie set (they even widened the beach to make it look more “paradise-like”).  And now 17 years on, travellers the world over still descend upon Maya Bay on Koh Phi Phi to find Di Caprio’s fictitious secret hippie hide-out. Located beside the jade-coloured Andaman Sea and right underneath limestone cliffs, nowhere in Asia looks so perfect – till mid-morning when it’s crowded like Bondi with speedboats. But stay right next door on Ko Phi Phi Don and take an early longboat ride over before the tourist speedboats arrive from Phuket at around 9.30am.

2. The Man With The Golden Gun 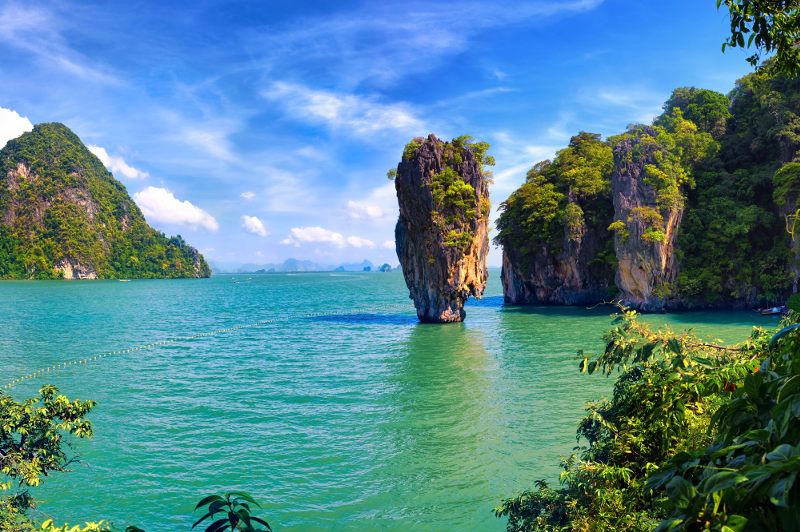 Hollywood changed the tiny islands of Phang Nga Bay so much that 43 years later, they’re still known as James Bond Island. The Man With The Golden Gun was filmed in these forest-covered limestone karst islands in 1974, starring Roger Moore. In particular, the 20-metre-high limestone tower karst island, Ko Tapu, which housed the movie’s ‘baddie’ Scaramanga, is an iconic reminder of Bond’s foray into western Thailand. Located just two hours from Phuket, James Bond Island is a popular day trip for travellers, allowing you to visit a movie set while seeing some of south-east Asia’s most striking island topography. Watch the movie, then book a tour from Phuket. 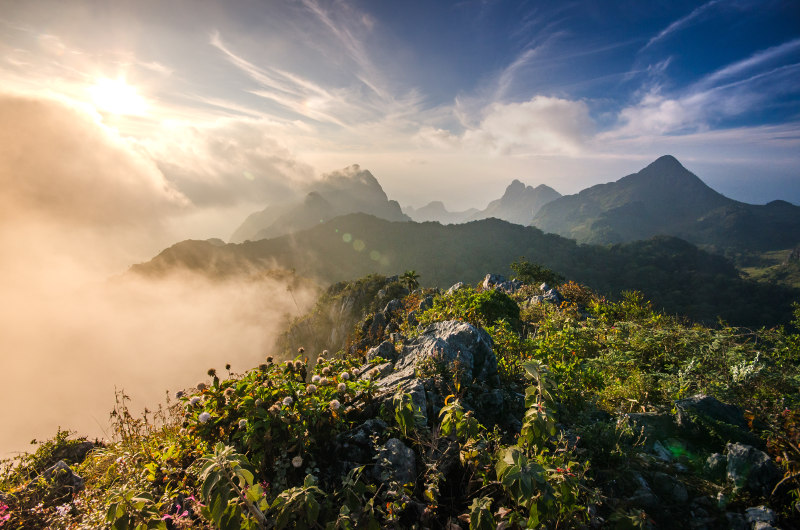 If you need a cool change, head for the misty hills of Chiang Mai. Image: Getty

Although John Rambo was the Vietnam War’s most famous veteran, it’s actually Thailand that’s much more closely associated with one of Hollywood’s most famous war characters. Much of the second Rambo movie – Rambo First Blood Part 2 – and the fourth – entitled simply, Rambo – were filmed in the rainforests of Thailand’s northern mountains, which border with Myanmar. If it weren’t for all the violence, Rambo could serve as a tourism marketing video for Northern Thailand, depicting the area’s waterfalls, rivers, thick forest, tea plantations and hill people. You can visit by flying to Chiang Mai, and taking day tours out into the surrounding mountains where ethnic hill people still live off the land.  There are no Rambo tours available, but it’s easy to spot the landscape used throughout the two movies. 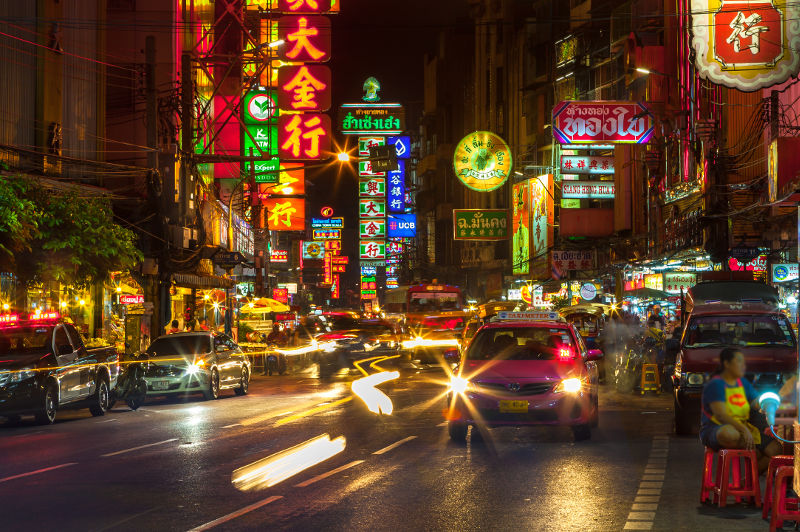 Bangkok’s Chinatown is big with foodies who come for the excellent street food. Image: Getty

The original The Hangover created a boom in tourism for Las Vegas (surely movie watchers didn’t want to re-enact the goings on of the movie, but Sin City’s party potential was illuminated on screen) and its sequel helped sell Bangkok to the masses. Bangkok is almost an extra character in the movie as the film’s characters race from one catastrophe to the next – utilising some of the city’s most striking scenery – from the Lebua Hotel’s glamorous Sky Bar (one of the highest open air bars in all of Asia) to the Soi Cowboy Red Light district and Bangkok’s Chinatown. You can retrace the characters’ footsteps all over the city – taking tuk tuks and boats down the Chao Phraya River just as the stars did. But it’s where the wedding is set to take place in the $1500-a-night Phulay Bay Resort in Krabi Province – set on Tubkaek Beach with a backdrop of limestone karsts jutting out from rainforest and ocean – that will really make you want to go to Thailand.

5. Bridget Jones – The Edge Of Reason 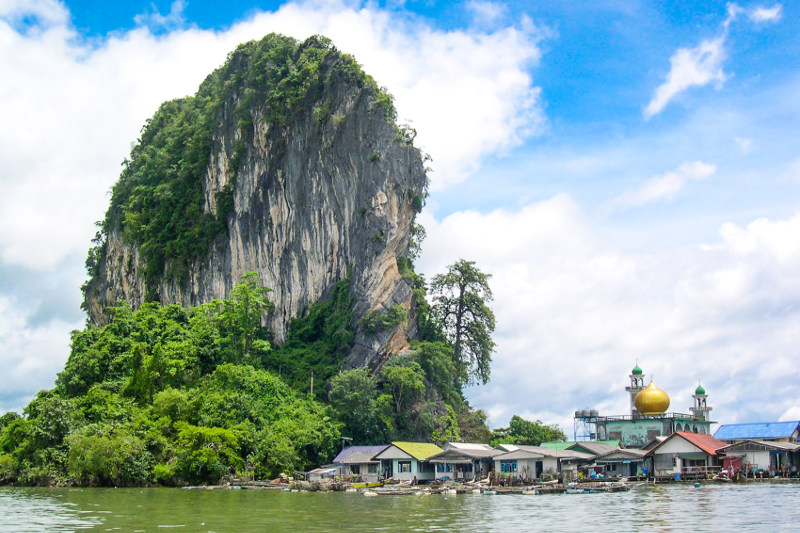 You don’t have to travel far from Phuket’s international airport at the north of the island to spend time on the beach producers used to film beach scenes in Bridget Jones – The Edge Of Reason. The sequel brings Bridget Jones to Thailand – and she spends her time on Nai Yang Beach – a white sandy beach beside a national park, bordered by casuarina trees and rustic bars and cafes. The cast drank at one of these bars – Mama Mia’s – which is still in use today. Just a little further up the road – you can visit the 200 year-old Muslim village on stilts used in the movie at Koh Panyee – located within Phang Nga Bay (visit the setting for Bridget Jones – The Edge Of Reason while exploring the setting for The Man With The Golden Gun).