From my lofty vantage point atop a headland I’m looking down across a green hillside towards the ocean. By the sea is a petite Greek fishing village with no more than a dozen modest homes clustered around a small natural harbor.

Although it's the weekend, I see no movement in this peaceful hamlet – it is the very definition of a 'sleepy' village. I soak up this calming vista for about 15 minutes, during which not a single car drives past on the tarmac road by which I have parked my rental car.

Eventually, I avert my gaze, get back into the car and head off through stunning, yet largely deserted countryside towards an impressive site of ancient Roman ruins. This is Greek island life, the relaxing, rejuvenating experience that lures millions of tourists each year. 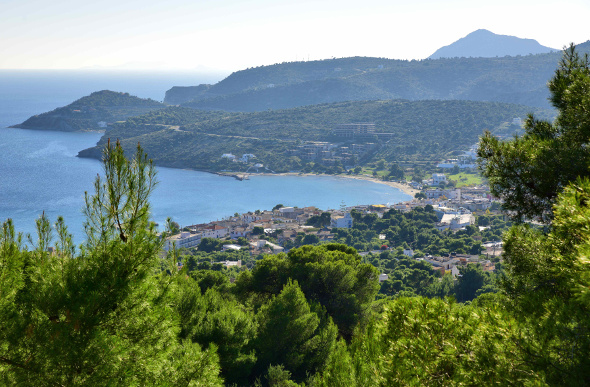 Yet I’m not marooned on some isolated speck of land way out in the Aegean Sea. If I just drive around a few more bends I’ll have a clear view of Athens, the Greek capital, which is a mere 40-minute boat ride away.

Athens is a fascinating city, brimming with culture and historical sites. But it is also a very noisy, busy place not particularly easy on the eye. It’s fortunate then that here, just off the coast, is the gorgeous, stress-free island of Aegina.

Ferries leave for Aegina throughout the day from the port of Pireas in Athens’ south-western suburbs. The first surprise, as Aegina came into clear view from the deck of the ferry, was the lack of development on the island.

Given its beauty and proximity to a giant city of almost four million people, I had expected Aegina to be blighted by hulking resorts and towering apartment blocks. Instead, I was greeted by a sparse coastline dotted with the odd small village. 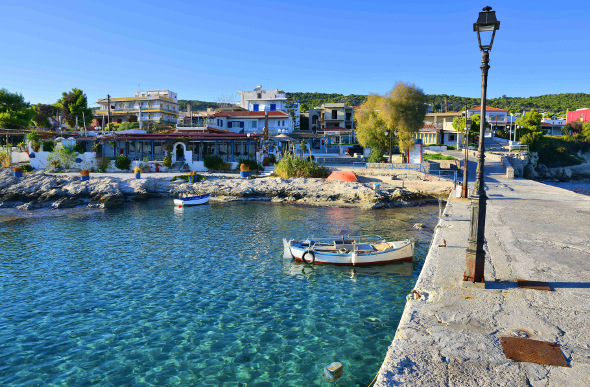 Even Aegina Town, our landing point and the island's hub, was understated. This low-rise settlement may be the most cosmopolitan part of Aegina, which otherwise resembles rural Greece, yet it still did not feel overly touristy.

On this sunny, 21-degree December day, a mix of locals and tourists gathered at the cafes and restaurants looking out across the water where dozens of sail boats and cruisers were moored. As my father and I stepped off the ferry, there were no persistent touts trying to herd us into restaurants, travel agencies or hotels.

We walked to a nearby car rental shop where the owner, a Greek retiree originally from Melbourne, assured us Aegina was far busier in the summer time. But, he said, it never drew anything like the hordes of travellers who descend on famous Greek islands like Santorini, Mykonos or Corfu.

At 87 square kilometres in size, roughly 15 kilometres east to west and 10 kilometres north to south, Aegina is a compact, triangular island. It is the perfect size for exploring either by car or on a motorbike, both of which can easily be rented by the harbour in Aegina Town. 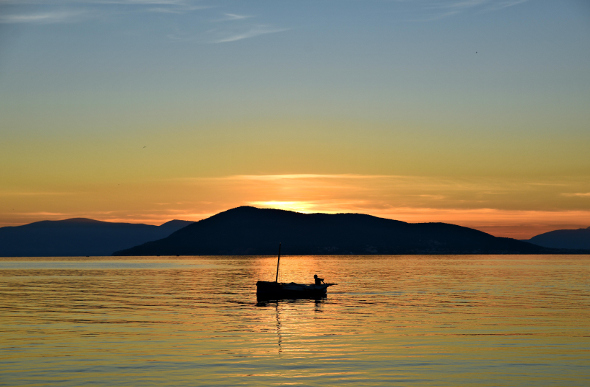 Cruising along the roads that wind through Aegina’s hilly terrain, we passed Pistachio plantations, pottery studios and Olive farms. Amid these quaint surroundings, the large Agios Nektarios monastery stood out.

Built into the hillside, this Greek Orthodox complex is fronted by a majestic church embellished by lofty towers and a huge terracotta dome. Named after Saint Nectarios of Aegina, the monastery welcomes visitors and its landscaped grounds are wonderfully quiet.

While the church does not have great historical value, having been built less than a century ago, the nearby Temple of Aphaia more than makes up for this.

Dating back 2,500 years, these hilltop ruins resemble a miniature version of Athens’ famous Parthenon. Unlike the Parthenon, which is cloaked by tourists even during low season, we had the Temple of Aphaia all to ourselves. 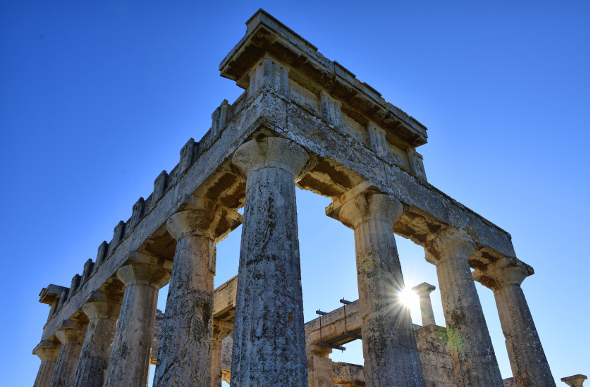 As we walked up the uneven steps leading to the ruins, an American tourist passed us heading in the other direction, leaving us the sole two occupants of the ancient site.

With gentle sunlight sliding between the temple’s timeworn stone columns, we looked out across the valley and could clearly see the concrete sprawl of Athens. So close, yet so far.