Standing atop the lofty wall of an ancient seaside fort, a young couple cast a dark silhouette against a sky ablaze with a warm palette of colours ranging from burnt orange to deep pink. All along the wall, families, friends and lovers are paused, staring out across the Indian Ocean at an awe-inspiring display by Mother Nature.

The sun is setting on Sri Lanka’s stunning southern coast and nowhere is this sight more spectacular than from the historic Galle Fort. Built by the Portuguese in the 1500s and later remodeled by the Dutch, it is a UNESCO World Heritage Site. The preservation body describes Galle Fort as the “best example of a fortified city built by Europeans in South and South-East Asia, showing the interaction between European architectural styles and South Asian traditions”.

Sunset over Galle Fort and the Indian Ocean. Image: Getty.

As I wandered through its charming network of streets, I found myself thinking “this shouldn’t still be here”. The majestic churches, timeworn Dutch shophouses, pretty European-style villas, whitewashed mosque and colonial-era public buildings somehow survived one of the world’s greatest-ever natural disasters.

On Boxing Day in 2004, Mother Nature sent a surging mountain of water towards Galle, decimating the small city. The tsunami destroyed more than 12,000 buildings in Galle and the areas immediately surrounding it.

Incredibly, Galle’s most historic precinct was largely unaffected, by comparison, thanks to the ramparts constructed by the Portuguese and later strengthened by the Dutch. The soaring walls of Galle Fort diverted the rampaging waters and saved this charming neighbourhood from destruction.

Eleven years on, this attractive and fascinating area remains among the world's oldest fort communities, a place where day-to-day life continues to play out in its timeworn courthouse, post office, market and shops. It is not only a major tourist attraction - with its well-preserved colonial architecture, grand fortifications and stunning sunsets - but also a working neighbourhood which operates independently to the tourism industry.

This sense of community only heightens the appeal of what is one of Asia's most engrossing colonial remnants. The Portuguese arrived in Sri Lanka at the start of the 16th century and set up a colony on a promonotory which juts out in to the ocean. In 1588 the Portuguese began erecting the fortifications around their newly-established hamlet, building on its eastern edge the Black Fort, parts of which remain today. 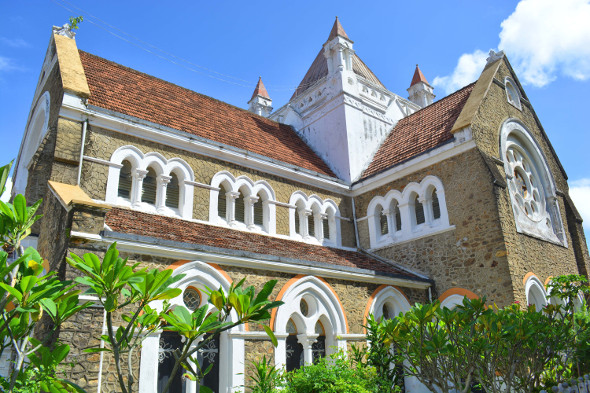 Going bananas for the north: Northern Sri Lanka is Bringing Tourism Back

A Battle Of Empires

Some 50 years later the Dutch, who were swiftly expanding their empire across Asia, defeated the Portuguese and took over Galle Fort. Not content with the small earthen fortifications erected by the Portuguese, they built their own stone fort, with its walls stretching around the entire promonotory, completely enclosing the colonial neighbourhood.

Embellished by 14 bastions, it was a formidable defensive structure. After more than 150 years in control of Galle, the Dutch lost it to the British, who made the Fort their main settlement in the south of Sri Lanka. The British Coat of Arms still marks some structures within the fort area, while the Dutch influence is patent in the architecture of its churches and homes.

Many of these Dutch villas have now been converted into hotels, restaurants, cafes, art galleries and souvenir shops to service the tourist industry. The accommodation options range from gorgeously-restored boutique hotels to cheap pensiones whose grandeur may be faded, but which remain cheerful and interesting places to stay.

Wandering the streets of Galle Fort feels like stepping back in time. Image: Getty

From its striking lighthouse to the ornate Dutch Reformed Church, and the National Maritime Museum and National Museum of Galle, the fort contains some engaging attractions. But Galle’s appeal does not lie only in its fort. The capital of Sri Lanka’s Southern Province, and the country’s fifth largest city, it is a lively place with amazing food, vibrant markets, lovely beaches and a plethora of magnificent temples. Day trips along the coast in either direction from Galle offer truly breathtaking coastal scenery – picturesque seaside villages, empty pristine bays, lush jungle and men fishing amid the waves atop wooden stilts.

But it is Galle Fort for which most tourists visit the country’s south. As the sun sets over its thick, stone walls and bathes its elegant colonial buildings in a gentle light, it is easy to see why. This is a unique and spectacular place.