Auckland is New Zealand’s largest city and also one of its most dynamic. The North Island metropolis unfolds on a narrow isthmus between the Tasman Sea’s Manukau Harbour and the Pacific Ocean’s Waitemata Harbour. Although Auckland owes a large part of its appeal to its sparkling geographical location, its interesting landmarks and cultural attributes are also prominent reasons for its popularity.

Here are five pieces of Auckland trivia bound to inspire your next New Zealand holiday. 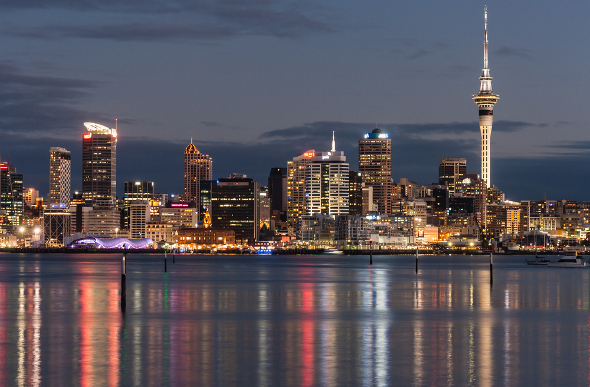 The Sky Tower stands out in Auckland's city skyline

Auckland’s second name is the City Of Sails

Featuring two major harbours and surrounded by endless water vistas, it’s no surprise that Auckland is a magnet for sailing enthusiasts. Adding to this is the fact that the city boasts the world’s highest boat ownership per capita – with over 135,000 vessels currently registered – leaving no doubt as to why its alias is the ‘City of Sails’.

Although sailing is a weekly ritual for many locals, the city also plays a starring role in international boat tournaments. In 2014, the City of Sails will serve as the halfway point for the high-profile Global Ocean Race.

Auckland is home to the world’s largest Polynesian population

Considered among the most diverse Southern Hemisphere capitals, Auckland is the world’s largest Polynesian city, with around 28 per cent of Auckland’s 1.3 million-strong population being of Pacific origin.

However, Auckland’s Pacific influence is more than just demographic and the capital’s love affair with island culture is strong. To experience it, visit the Otara Markets, a South Auckland weekend institution combining live music and traditional crafts; and Pasifika, a yearly festival celebrating the community’s heritage.

Auckland is home to over 50 volcanoes

Built on one of the world’s youngest volcanic fields, Auckland is dotted with over 50 volcanoes, each originating from a magma source located 100 kilometres below the city.

Popular locations include Pigeon Mountain, a much-loved hiking spot fringed by wetlands and mangroves; and Mount Rotskill, which boasts dizzying views from the summit. Onepoto Domain is a common haunt for native birdlife, which also features perfect explosion craters.

Due to its position between two natural harbours, Auckland’s hiking routes are the stuff of legend, and the Coast to Coast Walk is a must. The 16-kilometre route takes hikers from the Waitemata Harbour on the Pacific Ocean to the Manukau Harbour on the Tasman Sea.

During your hike, make sure you stop off at The Domain, a lush park known for postcard-perfect sights; and Mount Eden, a striking 196-metre-high volcano.

Standing at 328 metres tall, on the corner of Victoria and Federal Streets, the Sky Tower offers crystal-clear views of Auckland for 80 kilometres in every direction. The tower is the tallest man-made structure in New Zealand and among the tallest in the Southern Hemisphere. Enjoy dinner with a view in one of the tower’s sleek restaurants including The Sugar Club and Orbit Dining.

For holidays to Auckland, check out our latest deals here

Neha Kale is a writer and editor covering arts, design and culture at large. For Neha, a one-way ticket to London sparked incurable wanderlust and a decade of memorable trips – from exploring street art in San Francisco and sailing down the Nile to mapping galleries in New York and getting lost in the backstreets of Paris.
more articles from this author